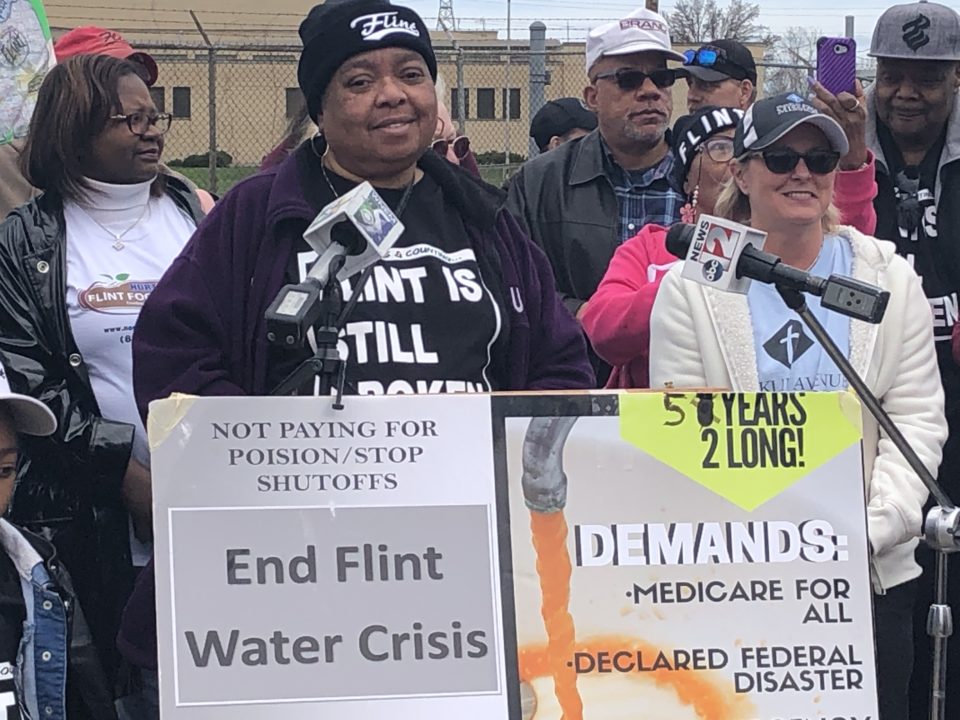 Flint, Mich. – Local citizens marked the fifth year of Flint’s water crisis with a press conference and chartered bus rally to the state capitol in Lansing to demand a resolution to the city’s lingering water crisis. Individuals and families gave personal testimonies of how the water disaster has altered their daily lives. Activists were careful to refer to the days’ activities on Thursday, April 25 as commemorative rather than a calendar anniversary.  Five years ago, the city’s water source was changed to the Flint River in a move that was supposed to be a cost-saving measure while the city was under state-appointed emergency management. Almost immediately, residents noticed a change in the smell and taste of the water.

“From the beginning, the situation was purposely ignored,” said Claire McClinton a spokesperson for FlintH20Justice, a group of local activists who organized the press conference and rally. “I think now people are dragging their feet and hoping that we will quiet down, but that’s not going to happen,” she said.

“Water by tradition is sacred,” said Rev. Monica Villarreal of Salem Lutheran Church.  “Water is a human right and not a privilege.  It is essential that government as a public good provide safe, clean, and reliable water to its residents. We have families that have lost loved ones.  We have families that are still impacted with their health. We have people with disabilities that don’t have access to services to get clean water.”

Claudia Perkins Milton said she is fed up and wants justice especially for children and seniors – the most vulnerable population that has suffered throughout the crisis.

“I would hope and pray that the needs of seniors and children who are handicapped in so many ways get addressed. I want the pipes to be replaced.  I want justice more than anything. I want people to be held accountable.  I want them to understand that they cannot just deliberately harm a whole city of people, especially because they’re poor, because they’re minority. They have to be held accountable,” she said.

On this day, the 5th anniversary of an avoidable traumatic experience, the flags at Flint City Hall will fly at half-staff.  We will not forget what happened here, nor will we allow the country to forget.

Prosecutors have asked a judge for a six-month recess in the criminal case against Nick Lyon, Michigan’s former health director, following the discovery of 23 boxes found in the basement of a state building. The boxes are said to have included a file titled “phones/wiped” with the names of eight state employees.  It has not been determined if the boxes are connected to Lyon who is charged with involuntary manslaughter.