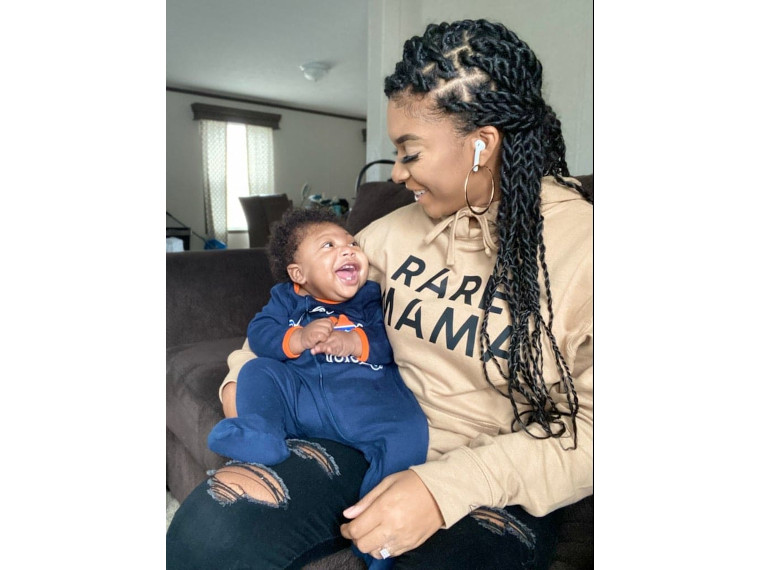 Featured photo: Cymone Bearyman smiles back at her son, Aubree Bearyman, her inspiration for the Rare Genetics clothing line

Lybrijian “Cymone” Bearyman, founder and owner of Rare Genetics Apparel, is the proud mother of four biological children and one stepdaughter. Adam Bearyman, her husband, helps her run the apparel business.

Having had several healthy children previously, ­­­­­Cymone Bearyman could have never expected she would go through what she did before, during and after her last pregnancy.

Her youngest child, Aubree Bearyman, was born with an encephalocele. According to the Centers for Disease Control and Prevention (CDC), an encephalocele is a sac-like protrusion or projection of the brain and the membranes that cover it through an opening in the skull. Encephalocele happens when the neural tube does not close completely during pregnancy. When the Bearyman’s learned of this, like most parents in this situation, ­­­­­Cymone Bearyman “didn’t know how to think or feel.”

Though ­­­­ Cymone Bearyman and her husband knew of their child’s diagnosis before she gave birth, she was able to go through the pregnancy “perfectly fine.”

Once Cymone Bearyman gave birth to little Aubree, he eventually had his encephalocele removed. He also had a shunt placement because fluid started the build up on his brain. According to John Hopkins Medicine, a shunt is a hollow tube surgically placed in the brain (or occasionally in the spine) to help drain cerebrospinal fluid and redirect it to another location in the body where it can be reabsorbed. Aubree also had to get a shunt revision because the first shunt didn’t work. Then, he had to have a shunt internalized, which Cymone Bearyman said was the last surgery.

“If he showed us he wanted to stay here on earth, though with his diagnosis they didn’t think he would make it living through even one day, then we would give him that chance-and allow him to make the decisions for himself,” Cymone Bearyman said. “Once he showed us he was fighting, we went ahead and did what we had to do with the surgeries, all the doctors’ appointments and the hospital stays.”

The Bearymans couldn’t have made a better decision, because little Aubree is a great addition to the family. Aubree is now 1-year-old, and, according to his mother, is doing great now.

“He is so funny.” Bearyman expressed. “He keeps us all laughing and smiling, and he makes everybody just happy. He brings a lot of peace and joy to our home.”

In order to spread awareness and be a light to families who are going through a rough time, ­­­ Cymone Bearyman created Rare Genetics Apparel.

She talked to a lady in Chicago who ordered from her clothing line.

“She actually loved it, and her son also was diagnosed with an encephalocele as well. We talked back and forth. She said it helped her a lot to be able to talk about it and be comfortable and be able to share-because not that many other people have this diagnosis.”

Cymone Bearyman also said she has also received support from families who do not have special needs children, which makes her feel great.

Mrs. Bearyman would like to make her business worldwide, but would like to have events at local schools to help spread awareness, starting in 2022.

“I just want people to understand that just because some children may look different or act different or not be as developed as other people, they’re still human. They still deserve everything in the world, just like other children.”

A healthy homemade soup to jumpstart the New Year