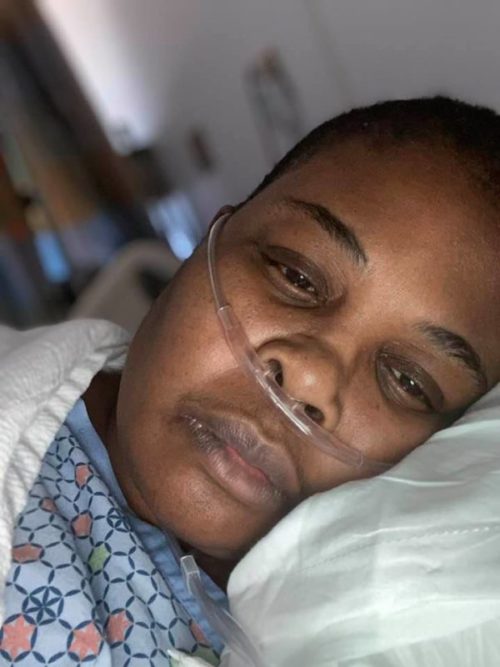 Yolanda Norman-Thornton, age 50, of Flint, never imagined she would be hospitalized with pneumonia, COVID-19 and cancer-all at the same time! Norman-Thornton was disabled and not working prior to being hospitalized. She is married and has a 20-year-old son.

The cancer Norman-Thornton currently has and was diagnosed with in January of this year is not her first cancer. In fact, most of the last several years have been extremely rough for her.

“I had thyroid cancer in 2010,” Norman-Thornton said. “Then, I had endometrial cancer in 2012. In 2015, I was diagnosed with non-Hodgkins lymphoma. It was present in my left neck. I went through the treatment for it. I had to do radiation. I had another PET scan done later in the year and found out it was in my right pelvic area.”

She had surgery performed. Then, Norman-Thornton was cancer-free for a while.

In January of this year, she started having a lot of pain.

“I had always had back pain because I had a back injury, but the pain was horrific,” Norman-Thornton said. “It was so bad I couldn’t turn over in the bed.”

According to Norman-Thornton, she had a good doctor who wasn’t just going to be passive.

“She wanted images. She wanted to know what was causing the pain increase.”

Norman-Thornton was sent to have an MRI.

“They saw that the cancer was in my back and on my spine. It’s in my belly. It’s under my arm in the armpit. It was devastating because I didn’t know what kind of cancer it was. All I knew was that I had cancer that was not just in any bone, but in my spine.”

She was diagnosed with lymphoma.

Having chemotherapy was especially difficult for her, which was new for her this time. She describes it as “brutal” and requiring strength from God.

“One word the Lord gave me was ‘there’s not a place that I’ve allowed you to come to that I haven’t equipped you to go through.’ He just told me He was faithful. When He gave me that word I knew I was going to be OK. It’s been hard, but He’s been faithful.”

After having chemotherapy, Norman-Thornton was told she would be more susceptible to other illnesses because the chemotherapy affects the immune system. Since her husband was going to the store and other places while she stayed home to protect herself, and her husband started off with a cough, Norman-Thornton believes she contracted COVID-19 from him. She was sick for about two weeks before going to the hospital.

“I literally was sick every day. First, it started out with just the nausea and vomiting. Then, it was diarrhea and just not feeling good. Meals and everything would make me sick. I got to where I couldn’t eat and I couldn’t drink. I was just getting sicker and sicker. Towards the end, I was hacking and coughing and had a fever. It was like the COVID-19 symptoms by this time, and I never even put it together. I never put the correlation together that I even had COVID-19.”’

Norman-Thornton called the doctor’s office because she had about two weeks before she was supposed to do chemotherapy, and she did not think she would be well enough to do it. She said she felt as if she were “deteriorating.” She even said she was so weak she was having accidents on herself. She had motion sickness and would get sick when she smelled things.

“I didn’t realize I wasn’t breathing well with everything that was going on. I had pneumonia and I didn’t know. I called the ambulance to come get me and take me to the hospital. They checked my o2 stats. They told me I needed to be on oxygen. They asked me if I was on oxygen at home. I told them ‘no.’ I wasn’t breathing well on my own. I was really on my way out of here.”

As of May 16, Norman-Thornton had been in the hospital about 14 days.

First, she was tested for pneumonia with a chest x-ray. She was told she definitely had pneumonia. The hospital then wanted to test her for COVID-19. She was tested using the nasal swab test, and she found out later that evening that she tested positive.

“They stick some type of stick-thing up your nose. They stick it up real far. They stick another thing up the other side real far. That’s how they get the results. They have to go up real deep. It hurt.”

When Norman-Thornton got her results she said she was initially mad at her husband. Then, she was very scared.

According to mayoclinic.org, people who have recovered from COVID-19 have antibodies-proteins the body uses to fight off infections-to the disease in their blood. Part of the blood from people who’ve recovered is called convalescent plasma. Researchers hope that convalescent plasma can be given to people with severe COVID-19 to boost their ability to fight the virus.

However, Norman-Thornton found out she was not a candidate for this treatment because her B+ blood type is so rare. She received a medicine called remdesivir which is being tested as a specific treatment for COVID-19 and has been authorized for emergency use in Japan and the U.S. for people with severe symptoms. Treatment is given through the vein. She took five doses, once a day, and Norman-Thornton said it made her feel better. In fact, she was able to leave the intensive care unit and go to a regular hospital unit May 13.

Norman-Thornton said she feels blessed that she has not had to be on a ventilator, although she was receiving high flows of oxygen and at one point on 15 liters of oxygen to be able to breathe. She went from 15 to 12, 12 to 10, 10 to eight, stayed at eight a while, ended up on five liters then three liters of oxygen. Norman-Thornton said when she gets up to do things she feels overworked, but she is “getting there.”

Norman-Thornton said symptoms such as upset stomach and GI problems are symptoms of both chemotherapy and COVID-19 symptoms. So, it is hard for her to determine what is causing the symptoms. Not being able to breathe was the worst symptom, however, according to Norman- Thornton.

She remembers her grandfather; Cecil Norman, saying “with God (and) with will power, there is nothing you can’t overcome.”

“I give all honor to God. I could be on the other spectrum of this thing, but God saw fit to let me survive and I’m grateful you can get through it. You need to be in a positive head space. When nobody can visit you in the hospital nowadays, that makes it so hard! You have to rally on your friends, your family and your faith. But, you can do it. God is our strength. If He allows us to come to it, He’ll equip you to go through it.”

On May 16, Norman-Thornton was released from the hospital. She is still on oxygen and has not been retested for COVID-19. She referred to her husband and son as her “support team,” and is very happy to be at home.