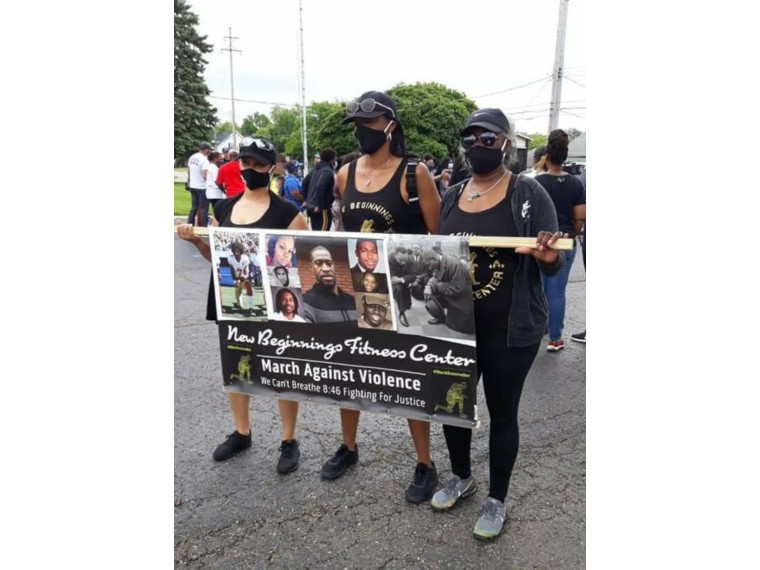 Amari Hill, age 23, of Flint, lost her grandfather to gun violence when he was hit by a bullet while in his home. At the time, Hill said her grandmother was at work, and came home to find a tragedy had occurred. Hill also lost two friends to gun violence this year. She said she is watching one close friend heal that had another close friend die in his arms.

Instead of remaining angry or bitter about how deeply her own life has been impacted by gun violence, Hill has allowed these experiences to “push her to a positive place” and aim to be part of the solution to violence.

Hundreds of marchers like Hill typically gather and march between 11:30 a.m.-1 p.m. the fourth Saturday every other month for the Unity March against Violence and Community Expo. They will gather Saturday, June 25. Through the march, multiple partners come together strategically, collaborating on the issue of violence. They also collaborate on what is going on within family structures, communities and in lives to combat violence. This year marks the 21st year the march has taken place locally.

The expo features housing resources, health resources and other resources. A prayer tent will be available. The local mental health agency will be onsite, as well, for anyone who just needs someone to talk to.

“Any time we have the Unity Walk what’s able to be accomplished is being able to give hope to community,” expressed Kenyetta Dotson, community activist and a founding and seed organizer of the Unity March.

“The idea is having so many community partners come together to provide resources and services right in the heart of the community to eliminate barriers,” Dotson added.”….If you can open your door and come right on the porch and see hundreds of individuals walking through your neighborhood with signs that says ‘we love you; we adore you; we’re here for you; we believe in you’-and giving out resource bags-it definitely uplifts your spirit. You can hear uplifting music designed to inspire and motivate individuals. It lets you know that you are not alone.”

Those who advocate and fight for hope through the march include churches, nonprofit organization and families who lost loved ones to violence. In addition, Dotson said every time someone in the community is lost to violence, other community members should not be desensitized, but can and should feel the pain. She has supported and continues to support families who suffer from the grief and the loss of losing their children or other family members because of violence.

According to Dotson, the march is important because it takes everyone in the community working together to eliminate the culture of and tolerance of violence here.

Dotson explained how the Unity March began to the Courier.

Fivefold Ministries was originally created to help those that are marginalized. Twenty-five years ago, Pastor Martez Warren, who currently serves as lead pastor of Church Without Walls, said the Lord told him to pass Fivefold Ministries to Dotson, who is his sister. Although Dotson said she did not feel equipped, she accepted-and from there Fivefold evolved into WOW Outreach, a 501 c3 nonprofit organization that strengthens families, youth and actively works to eliminate the tolerance of violence.

WOW hosts a collaborative, bimonthly group called Community Action Network. The group is open to everyone and meets at different locations every other month.

Anyone interested working to address the issue of violence from a community standpoint strategically and work with others from a partnership standpoint can visit http://wowoutreach.org/, or call 810-789-7700 for details. Hosting opportunities are available.

Genesee County Friend of the Court Conducting Back to School Blitz