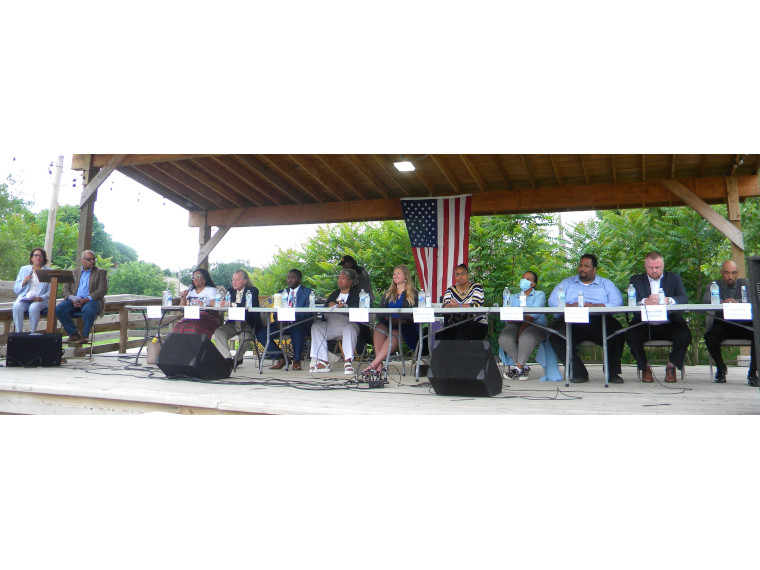 The Flint Branch NAACP, in collaboration with the Concerned Pastors for Social Action, The Genesee County Democratic Black Caucus and The Pan-Hellenic Council hosted a “Candidate Forum” for all Flint City Council primary candidates at The Heritage and Harmony Stage, 1401 W Dayton St.

During the forum, candidates for the 6th, 7th, and 8th Wards were asked a question pertaining to violent crimes in the city by Woolfolk.

“With the murder rate here in Flint seemingly skyrocketing, what do you see as your role as a councilperson in and affecting some change?” Woolfolk asked.

7th Ward Candidate Shannon Searcy said she believed people in Flint need something to do.

“I find that if there’s nothing going on then it seems like we’re getting into trouble,” she said.

“So, and I’m pretty sure it was more it was a younger age,” Searcy added, referring to some of the crime that had recently taken place and inferring youth especially need activities.

“So to kind of find things for the people or kids or the people who are involved in the violent crimes-to find things to do other than to be out,” she said. “I feel as though we can strengthen the police and also be able to allow for them to actually live into the city. So, if we find people who are more of the ward then we’re able to have people that are invested. So, if you give the police more incentives to live here, sign on bonuses and probably living in the ward, it allows for them to be more concerned in the ward. But, to give the people something to do-the residents, find for us to put our attention towards something else, and if that’s business, what we’re good at. (And) I find if we can get the kids off the street doing different activities in the summer, if we have senior citizen homes or youth center homes, we got to find things for people to do so that it’s not as much time on their hands.”

8th Ward Candidate William C. Harris said according to statistics, in the city of Flint, (it says) there is a one in 73 chance a person in Flint will become a victim of a violent crime. This statistic was also given on www.neighborhoodscout.com, on a webpage copyrighted 2000-2021.

“So, when it comes (to) violent crime: rape, murder and all of those things-when it comes down to it-we need to find a way one to stop it from growing, and that’s at low level crime,” Harris said. “Low level crime. These kids-when you’re not graduating from high school, you can’t read, you can’t write, you can’t pass a test, what are you going to do? You’re going to start breaking into homes. Then, you’re going to start robbing people. Then, when you rob somebody then you accidentally have shot them. That’s a violent crime. Then, when that person dies, it’s a violent crime. It needs to start from the root. The root is helping our young people in changing the educational system in the city of Flint. Reducing that issue will help with violent crime in our city.”

“It’s proven across the board,” Pfeiffer added. “No community is safe without police. Our councilmen recently voted no for a $4 million budget for public safety. I would’ve voted no, but not for the same reasons. I would have voted no because it’s not enough. We need to double, triple that amount. Police are what matter. When people are dying in the streets, and police only show up after the fact, they’re not there to engage it with community, they’re not there to deter crime, they’re there as historians. We need to increase police across the board.”

“My role as a councilperson in addressing crime is that we first have to have crime prevention,” said 8th Ward Candidate Tommy Ross.

“We need to with the police officers from what we already have,” Ross added. “We need to pay our police officers accordingly. I think right now they’re at about $14 an hour starting out. There’s no way I would put my life on the line like that at a job like that for only $14 an hour. We need to pay them what they’re worth. Also, our youth become a product of what they’re around. We don’t have schools. We have a lot of blight. There’s a liquor store on every corner. We got to first clean up the areas around them to give them something beautiful to look at. You go to areas on the outskirts, they look nice. They have new schools, new technology, you don’t see corner stores on every corner. Our kids, especially our Black, inner city kids, they deserve that same opportunity. I believe that we do that by engaging our youth and giving them something positive to look forward to.”

6th Ward Candidate Tonya Burns said crime is definitely a problem and it connects, for her, with economic development.

“(’Cause) we have to make sure that crime is under control,” Burns said. “We’ve had 99 homicides in the last year and a half. From 2020 to 2021, we’ve had over 160 shootings this year. We’re on a trajectory to have over 100 homicides this year alone. We have a problem residents-a serious one.”

Burns said Flint needs to utilize the money it received through the American Rescue Plan.

“People will say a lot of things,” Burns said. “First, they’ll say ‘get involved.’ I got involved. People complain about what they call Club Sunoco. The business owner likes to be called Sunoco. I got involved. I wrote a three-point action plan and mine is the truth. It’s cute that the chief says that they didn’t ‘cause of padlocking. But, he did not have the three-point plan. He didn’t ask him to have the cameras reinstalled. He didn’t ask him to have a security officer to adhere to all of the ordinances. I did get involved.”

6th Ward Candidate Chris Del Morone said the fact of the matter is we live in a lawless community, and it starts off, quite often, with the smallest of things.

“Look at how people drive in our community,” Del Morone continued. “Left turn lanes are used as a parking lane. Speeding limits are disregarded. Stop signs. I actually had a police officer tell me ‘don’t forget to stop at the green light’ because people are running the red light, and if you have the green light you get hit. There was a terrible accident on Stevenson and University Avenue. That’s where it was mentioned. But, crime quite often is generational. It’s because of a lack of education in our community. It’s a disregard for life-for one’s own life. I don’t expect for anyone to be shot out here right now this evening. But, people ask me ‘aren’t you afraid about living in Flint?’ I say ‘no because unless you’re part of a drug deal, a bad drug deal, doing drugs or in a three-way love triangle, chances are you’re not going to get shot walking out of church or City Hall or something like that.’”

6th Ward Candidate Terrae King Jr. said with the murder rate in Flint skyrocketing, his role as a potential councilperson would be simply to engage the community.

“Most of our trouble started because we stopped training our kids-period,” Perkins said. “We don’t train them like what we were trained, and that’s a big problem. (And)  plus a lot of the things that we grew up knowing or having are no longer in existence, especially on this North End. We had movie theaters. We had roller skating rinks. We had bowling alleys. We had all these things for the kids to be able to do. Now all they got is guns. I went down my street the other day and, like I said, I saw a guy with a holster and a gun. If they got those, I don’t want to violate their Second Amendment right. But I don’t want them to violate my life rights. So, I’m just saying, yeah, we need to help give the police a fair wage. But, still, we need to do things in the community that stop the crime. (And) we do that by giving them another outlet. (And) these kids have no outlets-especially on the North End and the East Side.”

7th Ward Candidate Allie L. Herkenroder said, first and foremost, she thinks it’s the responsibility of the councilperson, when the life of anybody in their ward is lost to violence, to make sure that that family understands that that grief is felt by everyone in that community.

“Second of all, I think that we also need to be investing into preventative measures for crimes-specifically with, like we said, the red lights being blown, all of the drive-by shootings, all of the shootings that we’ve experienced,” Herkenroder continued. “We need to invest in cameras that are able to prevent all of this crime and track who is conducting all of this so that we can make sure that they’re held accountable. The reason people run red lights is they know no one’s going to stop them. So we got to make sure that they know that there are people here who care and want to make sure that we have a safe Flint for every single resident who lives here.”

“It is the report card of an administration,” she continued. “That’s just real. I’ve been on Council for eight years, and every year we hear that we don’t have enough police officers. (And) every year we hear that the police officers are not making enough money. (And) yet every year, or every four years-however the contract is, the mayor negotiates with unions. (And) so, if in fact we are not paying our police officers enough money, are you telling me we don’t have the ability to look and see what the negotiation can be to find out what we can do?”

Galloway said the other question is ‘’where are we recruiting?’’

“Are we recruiting in the high schools-because you have some, I’m not saying that people should put their lives on the line, but there are people that love this community,” Galloway continued. “Are we going out? There not coming to us. (And) so the police chief is responsible for giving us a plan to reduce crime. (And) that’s not happening. (And) so the city council holds that office responsible for minimizing crime.”

6th Ward City Councilman Herbert Winfrey’s has decided not to seek re-election, and the incumbent in the 8th Ward, Allan Griggs, has served on the council for four years. Griggs was not present at the forum.

The Flint City Council primary election will be held August 3.