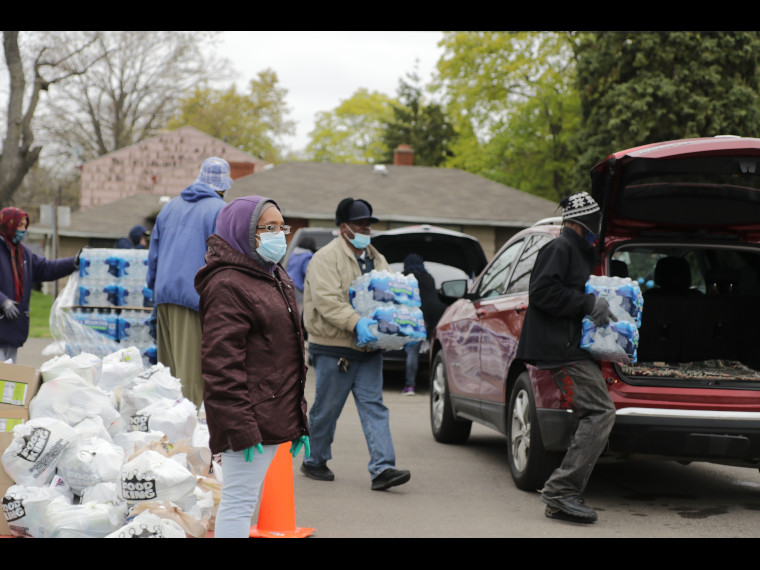 Seventy- two-year-old Sandra S. Jones may seem to get emotional when talking about the Flint Water Crisis. Jones said she is passionate about the matter because she still sees the effect it is having on children, seniors and people with various disabilities, as executive director of R. L. Jones Community Outreach Center.

Even the initial impact of the Flint Water Crisis was great, according Jones.

She points out that the year 2014 was when Flint changed its water source from treated Detroit Water and Sewerage Department water to the Flint River Because officials failed to apply  corrosion inhibitors the water, lead from pipes leached into the water. In 2016, the governor at the time, Rick Snyder, declared a state of emergency.

“I was afraid to drink the water,” Jones said. “Of course, we had been drinking the water. So, one of the main things that came in was fear. The other thing was caution. The next thing was asking what we do about it.”

January 2016 was when Jones’ local church, Greater Holy Temple Church of God in Christ, began to pass out water and work with different companies and organizations across the world.

Since the R. L. Jones Community Outreach Center on the campus on the church was the first site opened in the city as a pod, which all the other nine pods were trained out of, Jones has come into contact with many people who absolutely cannot tolerate the Flint water. These individuals include those on dialysis and those with diabetes, among others.

Jones is concerned that the Flint Water Crisis may not be top priority to the current governor, Governor Gretchen Whitmer, due to the coronavirus pandemic.

“Therefore, our organization is still giving out filters. They have hired a young lady in Flint to test people’s water. Come on now! We’re still testing our water. Why? Flint is (approximately) 60% minority. This is stupid!”

According to Jones, at the R. L. Jones Community Outreach Center they have not scaled back, but have scaled up since the start of the Flint Water Crisis.

Jones said her church’s community outreach center has accepted the challenge to distribute lead-fighting foods and water to Flint residents in need. Her site services those who do not have transportation. They offer food delivery and delivery of personal items.

Jones said her center has met challenges with getting funding for basic needs. She said it is easier to get funding for programs.

“How can you put me in a program when I am hungry? I am fighting every single day. I am crying. I am wanting to give up. I have to come up with a program that shows how we are meeting the needs of the community and training people on job readiness.”

At the center, young people who have not graduated from high school can receive help, including those who have been affected by lead poisoning. She sees young people ages 14-30 with no high school education. Jones said many of these young people go from living in one home to the next day by day, and many of them don’t realize they’re homeless. But they don’t have a permanent address.

“Baby, you can’t understand what some of them are saying. They are filling out applications and their handwriting is terrible. They’ve got emotional issues. I believe it’s because of the water. I’m tired. I’m not seeing our people get better. My heart hurts. I’m crying every single day to try to say ‘look, can you not see we’re dying here?”

Jones said she has been around a long time but has never seen a “drug such as lead.” She said it is compounding the problem when a person who has been exposed to lead also is able to use recreational marijuana.

“The Flint Water Crisis has affected us emotionally from seeing what it has done to others. My husband is a pastor. So, he’s also seen the effects of it.”

Jones’ has been affected personally by the water crisis, as well. Her own family has suffered because of it, too.

Jones does not trust the water coming from her pipes. Her family purchases their own bottled water. Her household includes herself, her husband and her 33-year old son.

One of the physical effects of the water crisis for Jones herself was thinning hair.

“I didn’t drink the water because it didn’t taste good to me. But, it wasn’t good for us to cook with the water either because even if you boil the water, the lead does not come out. As far as bathing with it, I had a rash on my body.”

Jones began to put Epsom salt in the water when she got the rash, not realizing it was an effect of the lead.

She now turns her shower on to fill her tub and take a bath because the shower head has a filter.

She has had to replace her washing machine several times because the water runs through its parts, which she said has been expensive. She has also had to get new refrigerators twice, which have an ice maker and filter water running through them. She has had to get a new dishwasher three times.

Jones’ niece has had a salmonella infection because of her water. Her niece’s memory has also been affected, according to Jones.

“Her baby came early, and he has been a part of this study. He’s 4 years old, and at 4 they were just able to get him potty trained. He’s just now beginning to make full conversations. His speech was seriously impaired. He could not look at you and understand. At first we thought he couldn’t hear. We found out that wasn’t the case. He’s been to Dr. Mona Hanna-Attisha. One of his legs was weak. The bones were weak. His mother has gone through a lot with him.”

Because of her great nephew’s issues, Jones said she is better able to identify problems with lead in other young people and suggest they get tested.

She doesn’t think about how much she spends on water per week. When she gets extra water donations, she shares it with elderly neighbors.

She does not trust the water at local restaurants. In fact, she asks where the water is from even when going to restaurants out of town, and she requests bottled water there.

Jones said the water crisis has not affected her and her family as much as others because of their strong ties to the church.

She said she has not received funding for herself through the R. L. Jones Community Outreach Center and has put her own money into its work.

“I think the biggest thing for me and my biggest compassion is I don’t see us moving forward. Everybody has somebody in their family that they don’t want anybody to know is related to them. That’s how I feel people feel about Flint.”

Jones said we’re growing and moving forward in Flint spite of both the Flint Water Crisis and the coronavirus pandemic, and she remains encouraged with God as her source.

Airbnb Releases Safety Tips Ahead of the Fourth of July