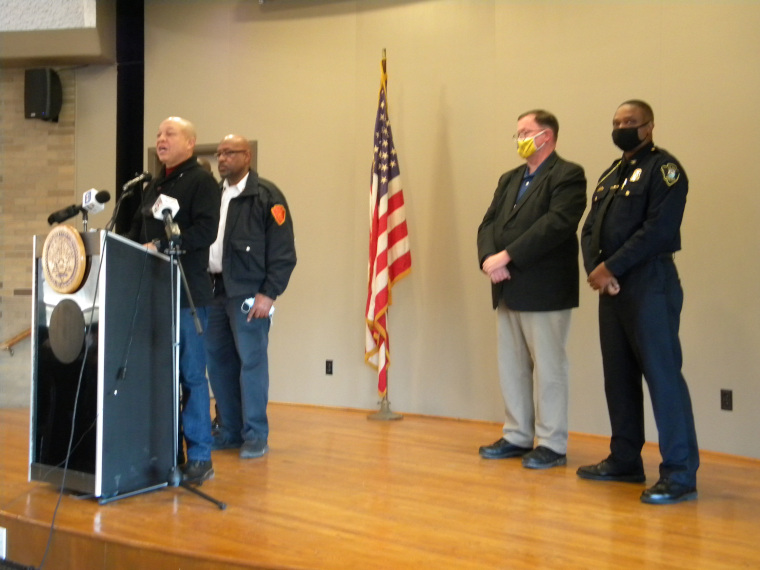 Featured photo: Two press conferences were held on Tuesday November 23, explaining to press the details found of an explosion that occurred Monday Nov. 22.

Two lives have been lost, including that of a 4-year-old child, because of a house fire and explosion that occurred on Flint’s west side Monday night.

The 4-year-old was the last person to be accounted for.

Flint Fire Chief Raymond Barton said it was very difficult to find the young girl’s dead body among the debris left from where the home once stood. He thanked Chaplain Josh McLaren for praying for the firefighters and residents to help them get through it.

The other person who died, who neighbors and officials originally thought was a 70-year-old man, was later identified as a 55-year-old woman.

The explosion occurred at approximately 9:30 p.m. Monday, Nov. 22 on the 3900 block of Hogarth Avenue, between Nedra and Walton avenues, just days before the Thanksgiving holiday. The explosion started in one home, and the two homes next to it also burst into flames.

About 30 homes were impacted to the point of structural damage.

Utilities at 27 houses in the area have been shut off by Consumers Energy and the city’s water department so no further damage was caused.

“It’s a sad day for the lives we did lose, and I’m hoping we can work together to get everybody back in their homes as soon as possible” said Michael Brown, the city’s Department of Public Works (DPW) director.

Dr. Tonya Bailey, a pastor at Hand of God Ministries, said the church was alerted by other community partners of the explosion. When they found out the proximity of the explosion to their church they immediately mobilized to become a “safe place and temporary shelter” for those impacted until  residents could get to  larger agencies with more resources.

“So around midnight the night of the incident, we mobilized, opened up our church doors, and starting allowing anyone to come and seek shelter,” Bailey said.

Volunteers were asked to help and to bring blankets, pillows, clothes, coats and non-perishable food items. Local restaurants have also given the church food, and other faith based leaders have offered support.

“The support and response from our amazing community has just been stellar,” Bailey said, pointing out that the church believes in the time of tragedy people need to have a sense of hope.

Tuesday night, the church began to take donations to adjacent residencies to Hogarth, where the tragedy happened. These residencies were also impacted and, according to Bailey, these residents were also traumatized.

Home Depot donated wood, boards and materials to help board up windows that shattered during the explosion so the homes could be in a safer condition.

United Way has set up a donation fund called the November 22 Flint Home Explosion Fund. Anyone can donate in 1 of 3 ways:

The city of Flint thanked its growing number of community partners that have assisted with the recovery efforts:

The city of Flint is encouraging all residents affected by the explosion to call the city of Flint Public Health Office at 810-410-2020. Family resources are available for shelter, food, clothing, mental health assistance, housing vouchers and other essential needs. Please give your name, phone number, address, and service needed.  The call center is open 24/7, according to Mayor Sheldon Neeley.

The cause of the explosion is still unknown and continues to be investigated.

The city of Flint is also asking the community to use caution when entering the explosion area as it is still being assessed and secured. Neeley said although he knew people wanted to see the scene, the city is asking people not to drive by just to see the site so that the investigation can be properly completed.