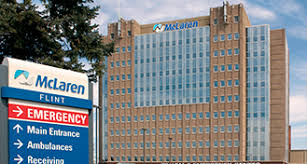 LANSING, Mich. – The Michigan Department of Health and Human Services (MDHHS) and Department of Licensing and Regulatory Affairs (LARA) today issued orders under the Public Health Code requiring McLaren Flint Hospital to immediately correct conditions in its facility to reduce the risk of future exposure to Legionella at the hospital.

Under the Michigan Public Health Code, MDHHS has a duty “to prevent the spread of diseases and the existence of sources of contamination.” In carrying out its statutory responsibilities, MDHHS may issue an order to “correct, at the owner’s expense, a building or condition which violates health laws or which the local health officer or director reasonably believes to be a nuisance, unsanitary condition or cause of illness.”

LARA, under its regulatory oversight over the specific provisions of the Public Health Code it administers, has issued an order with identical requirements for the hospital.

“The department has attempted to work with McLaren Flint to assure that all appropriate steps are being taken in a timely manner to protect the health, safety and welfare of patients, staff and visitors within the health facility,” said MDHHS Director Robert Gordon. “Prompt compliance with this order will minimize health risks for McLaren’s patients.”

“Steps taken by the hospital have been insufficient to resolve Legionella issues that impair its ability to deliver an acceptable level of care for the health and safety of the public,” said LARA Director Orlene Hawks. “Our order requires the hospital to take additional measures to protect Michiganders and ensure compliance with the Public Health Code.”

McLaren Flint was the subject of Legionella disease outbreak investigations in 2014, 2015 and 2016. Due to those investigations, MDHHS issued an Order on Feb. 14, 2017.

In 2018, three patients at McLaren Flint experienced conditions MDHHS believes to be Legionnaires’ disease with a possible association with their stays at the hospital. The Centers for Disease Control and Prevention (CDC) agreed with the department’s determinations.

However, McLaren Flint has disputed the determinations and refused to fully implement recommendations given by both the CDC and MDHHS on how to investigate suspected cases in the future, and on the steps to be taken regarding the water system to better assure public health.

In 2019, two additional cases of Legionnaires’ disease with association to McLaren Flint have been reported. One of these cases is a definite healthcare-associated case as the individual spent 10 days at the facility during their disease incubation period.

In response to the most recent cases, MDHHS requested investigation assistance from the CDC. McLaren Flint agreed to the CDC’s involvement, but has attempted to set conditions for the public health investigation that the department and CDC feel would hinder the investigation.