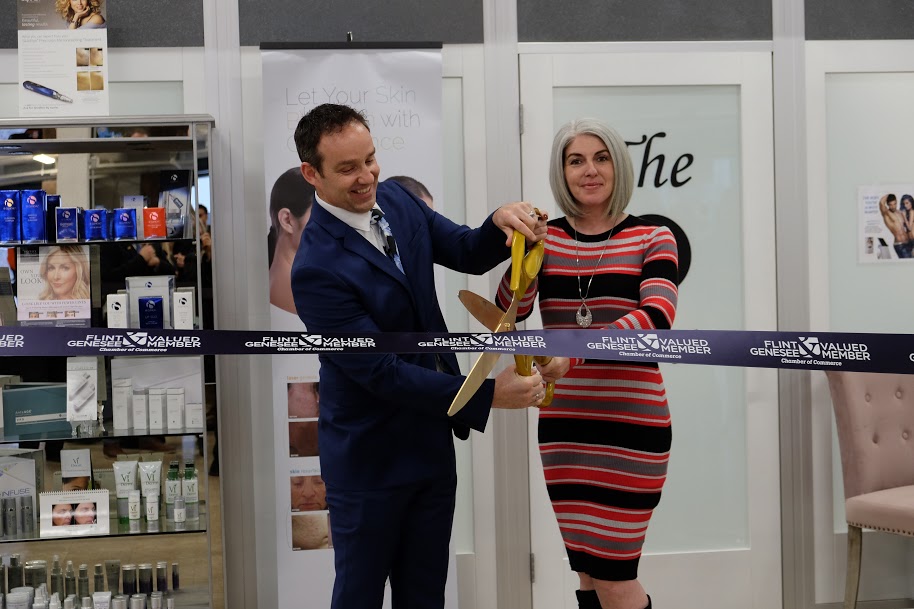 “Anything new in Flint is worth supporting-even if you don’t know the end result. I think just having that support is going to build a stronger community,” said Phill Walker, who attended the ribbon cutting.

“The buzz is people are really excited about the spa,” said Dr. Bobby Grossi; founder of Grossi Med Spa.

Grossi is hoping the spa will gross about a quarter of a million dollars in its first year.

“I’m a firm believer that you have to give back from what you make. I always give back 10 percent, if not more, of what I make. We can change a lot of lives; generate revenue downtown.            We can reach back into the community. Everything that I do, even my free day of dentistry-it’s all based on giving back to the community.”

Dr. Bobby Grossi lived in Flint for 32 year. In 2005 he left. He still has another business on Hill Road; Grossi Dental and Wellness.

“Me personally, I live in Linden. But, it’s still Genesee County. Flint is the culture I know. It’s a beautiful city. People undervalue what Flint is, and I know that to me, my wife and I always wanted to make the biggest difference in Flint. We’re both from Flint. People always say don’t forget where you come from, and my roots are here,” Grossi added.

Grossi got into dentistry because of his grandfather.

“I had a single mom who raised three kids. My grandpa died of throat cancer. So, I tried to dedicate my career to try to make a difference in cancer.”

Grossi also changed his last name to his mom’s maiden name, Grossi, in order to honor his mom. As Grossi started to realize the difference he could make in people’s smile, their self confidence and their self worth, people also started asking him if he ever considered doing anything out of the box like creating a spa. At first, he didn’t take it seriously.

“But now I think it might be a little bit of God’s calling. People kept asking for it. So, I thought ‘why not?’” Grossi said.

Carrie Bush is the esthetician at Grossi Med Spa. She has been an esthetician for over 13 years and has over 27 certifications-including 14 in laser treatments, as well as in multiple advanced chemical peel treatments. She trained with Gary Begley; a laser engineer in Scottsdale, Arizona at IMAj Institute. She also does the Yumi Eyelash Lift and Tint, which one can only train to do in France.

“We have a treatment for every skin condition, every age group and every ethnic background,” Bush said.

She said she desires to help all people love the skin they’re in, as well as to educate them to help with their biggest concerns. In addition, Bush said she has years of experience with darker ethnic backgrounds, and she offers free consultations.

Grossi said at the moment the Dryden Building may not be the best possible location for a medical spa.

“Do I believe in six months to a year it will be? Yes! I just think that it’s something new and invigorating that Flint needed. You don’t see many med spas downtown,” Grossi said.

The Flint Water Crisis-Past and Present