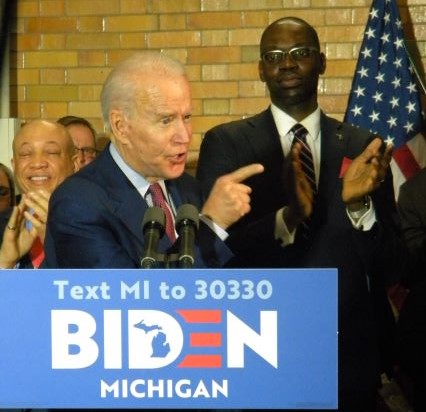 Michigan Lieutenant Governor Garland Gilcrest was in attendance, saying he is in Flint so much because “this community is important.”

Gilcrest told attendees they should support Biden because of his record, because of the results he’s delivered for communities across this state and because of the relationships Biden takes the time to build. Gilcrest said Biden’s record includes expanding healthcare and providing access to public transportation.

Senator Cory Booker of New Jersey, who was also a former Democratic presidential rival, publicly endorsed Biden at the event, held at the Berston Field House.

He said it was obvious to him that for a wounded nation Biden is a healer.

After Biden approached the microphone to speak, he said that Michigan may determine the next election.

He said the country needs to come together and that in this election character is on the ballot.

“The rest of the world is looking at us like what in the world is happening in the United States,” Biden said.

According to him, the United States could survive four years of President Donald Trump, but not eight.  Biden said it was necessary to fight.

“But we cannot become like the other team,” he said.

Biden said it was not about him, but it is about the American people. He also said 40 percent of American people were having trouble “just making it.” He noted support for a number of infrastructure bills.

Biden told Flint voters if he won the election, they would see a lot more of him in Flint. He said he knew Flint residents needed help with “water issues.”

Biden said what he and others were looking for was not a revolution, but they wanted to be able to trust the water that comes out of the pipes and what is being said about it.

During his speech Biden spoke about Flint’s resiliency.

“This could be the day we remember where we turned a whole nation around from going the wrong way to the right way.”

Mayor Sheldon Neeley said he and his team were there to support the efforts of making sure people got out to vote.

“We were here with the vice president Joe Biden as he moved through the city of Flint on his campaign trail to the White House,” Neeley said.

Both he and Cynthia Neeley, who is a candidate for the state House in the 34th district, have endorsed Biden.

“I think it went awesome. A lot of people were at Berston Field House speaking to one  another and coming together under the idea of making sure our country and state moves forward. Biden said he has not forgotten about Flint. He will continue to be a partner, continue to support Flint and this won’t be his last stop in the city of Flint,” Mayor Sheldon Neeley said.

“What really stood out the most to me was the fact that he made it here at all. He let us know Flint is on his mind. He hit on important topics. If I had to grade him on his speech, I’d give him an A,” Jones said.

Sanders was endorsed by Cornel West and Jesse Jackson.

“I’m trying to keep up with them particularly if they come into our hometown,” Mays said.

Mays said either candidate could effectively be the president of United States, in his opinion. He said this was “particularly when you compare them to Donald Trump.”

“Whichever one gets the nomination I think they should strongly consider the other one as their vice president. I hope that the residents of Flint continue to value the importance of getting out to vote, particularly with the opportunity in the state of Michigan and the city of Flint where everybody can vote by mail and vote absentee for no reason. I’d like to say vote by mail. Get it done early. It’s so convenient for people to vote. I am hoping that that’s the vehicle that gets the numbers up.”

Mays said he hopes from the democratic primary through August and November turnout continues to increase.

The Flint Water Crisis- Past and Present The Jenkins Family

Fauci warns of ‘surge upon a surge’