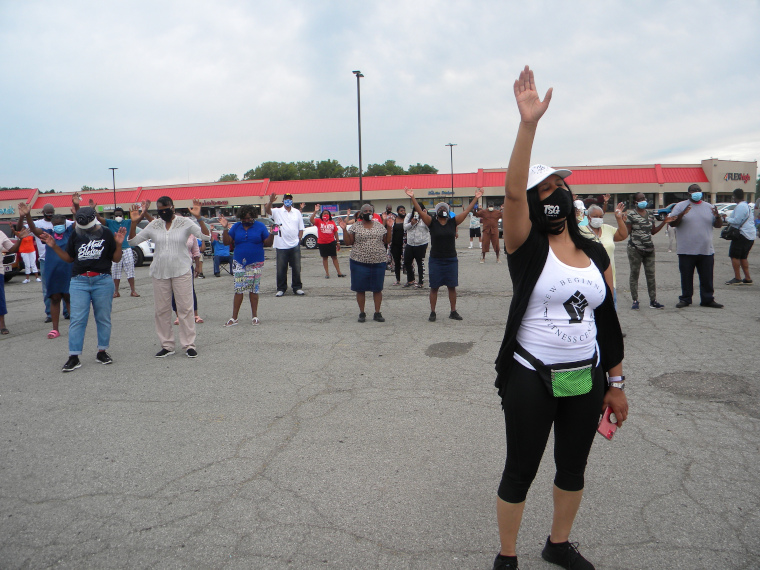 Featured photo: A group of believers gathered outside Hallwood Plaza August 1 for what many say they believe will help spark positive change in the city. Photo by Tanya Terry.

Police are investigating a homicide that occurred before 1 a.m. August 1 near Pasadena Avenue and Burgess Street where there had been a large gathering. Witnesses told police they had been trying to drive the fatally wounded victim to the hospital when another vehicle crashed into their vehicle at the intersection of Dupont Street and Welch Boulevard. Police found the victim deceased due to an apparent gun wound at the crash scene.

Still, a relative of 26-year-old Roshawn Terrell, who was shot Sunday July 26 at Mega Classic Diner in Flint Township and died soon afterwards at an area hospital, is confident her prayers will be answered. Carradine said Terrell was a “good person who died due to gun violence.” She brought Terrell’s very young son with her as the family received prayer during a Pull Over for Prayer event held on every corner of the city from Clio and Dayton to Pierson and Dupont hours after the shooting that occurred August 1. Carradine told the Flint Courier News she needs Terrell’s son to be covered by the blood of God.

Carradine also gathered with others to pray for the city at Hallwood Plaza after the Pull Over for Prayer Event the same afternoon.

“I’m saved,” said Carradine, who is a member of Mt. Carmel Baptist Church.

“I believe in Jesus,” Carradine added. “I’m very confident the city will be saved.”

According to Pastor Ralphael Read, one of many individuals who gathered around Flint residents in need of prayer and spoke to God on their behalf in front of Mt. Carmel Baptist Church August 1, Flint residents wanted prayers of faith, prayers of comfort and prayers of stability. Read said it was important to be there to combat the violence and to combat what’s been going on in the city.

“The prayers of the righteous man availeth much,” he said. “We want to just be here for the people, let them know we love them, that we’re praying for them and that we’re concerned about their well-being. We believe that the power to heal the sick is in the church’s hands….I am 100% confident (in our prayers) because I’m confident in the product of Christ. He said if we ask, it shall be given. If we knock, the door shall be opened, and if we seek we will find.”

Near Read, Pastor Eric Lewis of Faith Temple Church of God in Christ invited residents to get prayer by using a megaphone.

“We felt there was a need for us to have our presence in the community, to pray and let people know that we, as pastors, are concerned for our communities,” Lewis said. “…We saw so much violence we thought we would just ‘take it to the streets.’”

Lewis said he prayed that day for the community, for our government, for healing, peace and about COVID-19, as well as against violence. He said he was “as confident as the Word of God is sure” his prayers would also be answered.

Over 20 pastors were present at Hallwood Plaza.

Read, Lewis, Pastor Nate Dennis from the Secret Place Tabernacle, Rev. Dr. Henry L. Fuller of Mt. Calvary Baptist Church and Pastor Chris Martin of Cathedral of Faith Ministries lead the crowd in prayer at Hallwood Plaza at 3 p.m. City Councilman Eric Mays was present and a representative from the Nation of Islam was, as well.

“Somebody said the ministers and the people Flint-the church folk- are not united, but I declare today in the name of Jesus…we are united and we are one,” said Pastor Alfred Harris of Saints of God Church, who is the president of Concerned Pastors for Social Action.

“We had a nice turnout,” said Ozie Holbrook, a member of Metropolitan Baptist Church who came to Hallwood Plaza after hearing about the shootings that had occurred the weekend before and because she felt the city needed prayer. Holbrook said she believed the young people need some type of leadership and she said there were fantastic leaders in Flint, including those in many of the churches.

“I am sure this is going to flourish,” she said. “With God, I know things can become better, and I know it will become better!”

Flint resident shares his tragedy to help others