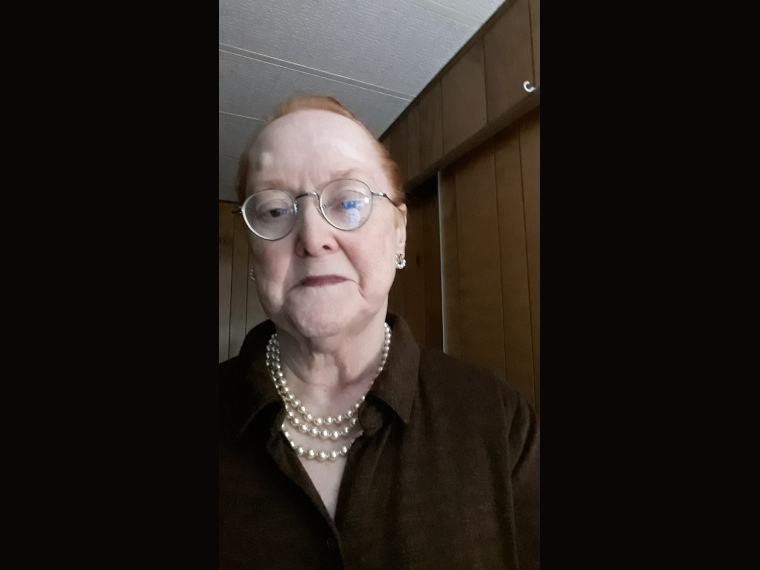 Mary LaBranche, a retired optical professional who is losing her sight and a Flint Courier News reader, prefers absentee voting over in-person voting. LaBranche said she has been voting for 50 years.

She said she believes Americans need to participate in order to be a full citizen.

“I think that’s not only a right, but a responsibility,” LaBranche said. “Secondly, people have put their lives on the line. Many of them have died in wars, protests and marches to sustain our rights to vote. I think it’s our responsibility to them to vote, but ultimately it’s a responsibility to ourselves.”

What LaBranche said she likes least about people who don’t vote is that they seem to her to be the ones who complain the most about what elected officials are doing.

LaBranche posts about voting on Facebook and Instagram. She regularly talks about the importance of voting with friends. She talks about it in the line at the grocery store to strangers. She used to give others rides to the polls until she started experiencing problems with her vision and stopped driving. If there are specific issues LaBranche feels are of extreme importance, she sends out postcards encouraging others to vote on these matters.

For example, a couple years ago a building was being constructed at the high school in Flushing. It was going to be for the use of area senior citizens, as well as for high school students so the two age groups could communicate with each other more. LaBranche said she thinks it’s important for various age groups to associate with each other, and she usually sends out 25-30 postcards at minimum to encourage other Genesee County residents to vote in favor for these types of projects. The building ended up being used only for the youth. LaBranche attributes this to lack of voting.

LaBranche was not interested in politics when she was young. Her father was a Republican who was very active in politics in Genesee County and her mother was a Democrat. She credits Father James Kavanaugh, a former Flint priest who is deceased, with encouraging her and other young people to get involved. LaBranche worked as a volunteer for the Urban League. She was part of a group that handed out flyers and told the residents other people would be around to help them register to vote.

“We stuck out like a sore thumb. We were these white kids on the north end of Flint, but we felt like we were making a difference. We all learned from each other because at that time, we were ignorant of many things…I protested a Kroger’s store on Clio near Pasadena. It would have been between ’69 and ’72. It was organized to protest against grapes. Cesar Chavez was getting a lot of press and publicity and getting people to protest against different things.”

The protest was over the treatment of the migrant workers who were picking and shipping the grapes.

“I’ve engaged in other protests. The Vietnam War was also a very big issue.”

LaBranche cast her first absentee ballot in 2007 because she had just lost her sight for the first time Halloween day. She was very upset because she didn’t know how she was going to vote.

“Somebody at the senior center said ‘hey, you can absentee vote.’ So, I started voting absentee.”

LaBranche said she thinks people can feel rushed when voting in person, and she feels having an absentee ballot in the house can stimulate conversations in households or among friends. She has learned items are on the ballot she did not know would be on there and had time to ask others how they feel about the matters. In addition, LaBranche considers absentee voting to be convenient. She feels absentee voting will eventually become the norm.

“I think absentee voting will help once people get into the rhythm of it.”

LaBranche has heard talk of people stealing votes and Americans not getting their ballots in recent primaries, having their absentee ballots sent to the wrong addresses or receiving unusable return envelopes. She has also heard that mail-in votes may be easier to challenge. She trusts the anti-fraud protections built into the absentee voting process, however.

“I don’t think absentee voting increases the chance of fraud at all. When they count the ballots, everybody is checking on everybody. I feel, in a way, it’s a lot more efficient. I wish they would let them start counting the ballots before the election is done so the results aren’t delayed. I think it can be very efficient, and there are some states that have been doing this for years with no problems. Georgia and Florida seem to be the two states that consistently have problems. I think those are people problems, not ballot problems.”

LaBranche would like to see absentee voting take place universally throughout the United States, especially to protect poll workers, who tend to be over age 55 and may have concerns about coronavirus.

“There are a lot of ways to intimidate people at the polls or confuse them about the issues. I think all that could be eliminated if they didn’t have to engage with anyone else at the polls…I was and still am a great admirer of John Lewis. I had occasion to hear him speak a few times, and I have always followed him. I think the best way we can honor his memory is to vote.”

There is a drop box for secure absentee ballot in front of Flint City Hall with 24-hour access and security. There are also four drop boxes at various locations throughout the city, which will be staffed with city of Flint election inspectors and open from 9 a.m.-5 p.m. Monday August 3. These boxes are located at Berston Field House at 3300 N Saginaw St., Word of Life Ministries at 460 W. Atherton Rd., Mince Manor at 3820 Richfield Road and West Court Street United Methodist Church at 2920 W. Court St.  For additional details about the August 4 election, call the Flint City Clerk’s office at 810-766-7414.