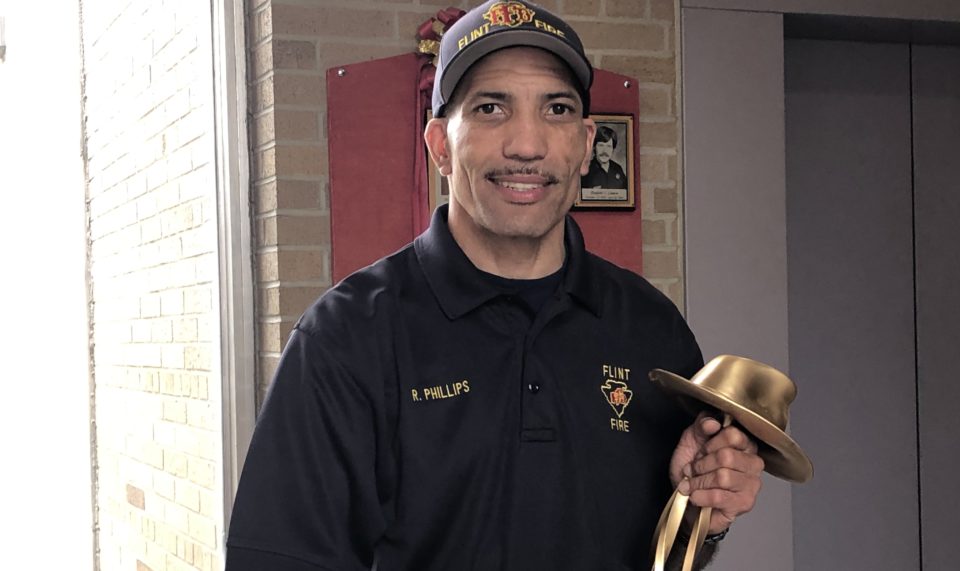 Rico Phillips, Flint firefighter and founder of the Flint Inner City Youth Hockey program, was named the 2019 recipient of the Willie O’Ree Community Hero Award during the NHL Awards Show in Las Vegas this month.

The Willie O’Ree Community Hero Award recognizes an individual, who like Willie O’Ree, has worked to make a positive impact on his or her community, culture or society to make people better through hockey.

“I could see there was a need for change,” said Phillips who spent years as a hockey player and referee. “I know how much I love this sport. I want to make sure that I gave an opportunity to others. I’m so happy to represent our town in this big way,” he said.

O’Ree, born in Canada, was a former professional ice hockey player known best for being the first black player in the National Hockey League. He played as a winger for the Boston Bruins. O’Ree is referred to as the “Jackie Robinson of ice hockey” due to him breaking the black color barrier in the sport.

O’Ree’s professional hockey career began in 1958 when the Bruins called O’Ree up to the NHL from a senior league in Quebec to replace an injured player. O’Ree lost 95 percent of his vision in his right eye, two years earlier, after getting hit by an errant puck. Had the NHL known of his injury, O’Ree would have never had the chance to play professionally.

Phillips always desired to make his community a better place. Rico’s impact on the community has been made better through his passions in life, firefighting, and hockey. For the past six years, his hockey program has provided the children of Flint the opportunity to play hockey for free.

Through this nine-week program, Phillips has been able to promote cultural diversity within the community while adhering to a strong set of values. The young boys and girls experience a new sport while building character through commitment and hard work.

Taliban Seeking to Expand Capabilities With U S Weaponry