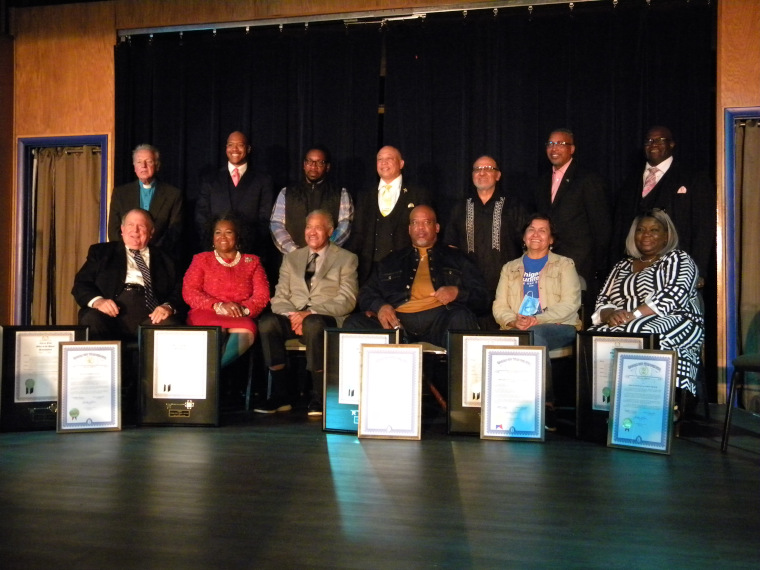 Mayor Sheldon Neeley and the city of Flint honored 11 faith based champions with the city’s highest honor, the Keys to the City, on the evening of October 21 at the New McCree Theatre. The honors were given to area churches for outstanding work in the community over the past year and for supporting the community throughout crisis.

“God is in everything we do,” Neeley said. “We must acknowledge Him.”

An opening prayer was offered by Pastor Martez Warren, who serves as the senior pastor of Church Without Walls Ministries.

Charles Winfrey, executive director at The New McCree Theatre, then offered a few words in what he called the theatre’s new “forever home.” He called all the honorees “outstanding.”

Lynn Williams, a member of Shiloh Missionary Baptist Church, then set the stage for the rest of the program by singing “But Still I Rise” as a solo.

“Truly as a community what defines us is how we rise,” Neeley said.

He complimented the community for continuing to rise despite the water crisis, the pandemic and other hardships.

Then he told those in attendance 180 inquiries had been sent during the nomination process before deciding which churches to honor. According to Neeley, there are 420 churches in the city, with 380 of those churches being predominantly African-American.

Neeley assured no disrespect was meant to the other churches in honoring the 11 churches being recognized.

A representative from State Representative Cynthia Neeley’s office also presented each honoree with a special tribute.

“On behalf of Ashbury Church and Ashbury Community Development Corporation, we’re honored to be able to serve the city” McDoniel said.

When Mayor Neeley presented the honor to Bethel United Methodist, which is led by Pastor James Cogman, he said people often mistake Bethel for his church because he is often there for programs. The church is one of three HELP Centers in Flint, offering water, nutritious food, water filter cartridges and health services to residents at no charge.

Steve Anthony, pastor of senior adults at Central Church of the Nazarene, accepted the honors on behalf of Rob Prince, lead pastor, and the rest of the church staff and family. He said at the church they pray: “Thy will be done in Flint as it is in heaven.”

Neeley referred to Pastor Warren of Church Without Walls as “tough” when the church was honored, saying they continue to talk about the violence in the city at the church.

Neeley referred to Greater Holy Temple as “one of the legs that’s holding this community up,” as Pastor Roger and Sandra Jones accepted the honors. The church is also a HELP Center.

Chairman of the Trustee Board Andree Hicks accepted the honors for Macedonia Missionary Baptist Church on behalf of Pastor Samuel Berry the III and the rest of the church staff and family. Neeley said it was one of the sites they started mass COVID-19 testing at.

Alberto Vasquez and Aurora Sauceda accepted the honors for Our Lady of Guadalupe on behalf Fr. Paul Donnelly and the rest of the church staff and family. Vasquez said the church is proud to be a place where those in a “far-away place” who don’t know the language can talk to someone.

Sister Cheryl Stinger accepted the honors on behalf of Prince of Peace Pastor Jeffrey Hawkins and the rest of the church staff and family for Prince of Peace Missionary Baptist Church. The church partnered with other faith based organizations to make sure seniors were able to get water.

Pastor Dr. Daniel Moore accepted the honors on behalf of Shiloh Missionary Baptist Church. The church has been a site for COVID-19 testing, vaccinations, water giveaways and more.

“With all the ups and downs, the water crisis, all this city has been through, had it not been for the Lord on our side, we wouldn’t have made it,” Moore said. “We’re thankful to be able to do His work.”

Pastor George Wilkinson accepted the honors on behalf of Word of Life Christian Church. The church is a testing site for COVID-19 testing two days a week, and Neeley called Wilkinson “dynamic.”

“As we move forward, we need to set a people’s agenda,” Neeley said.

“We must continue to act as there is a God,” he added, as part of his closing remarks.