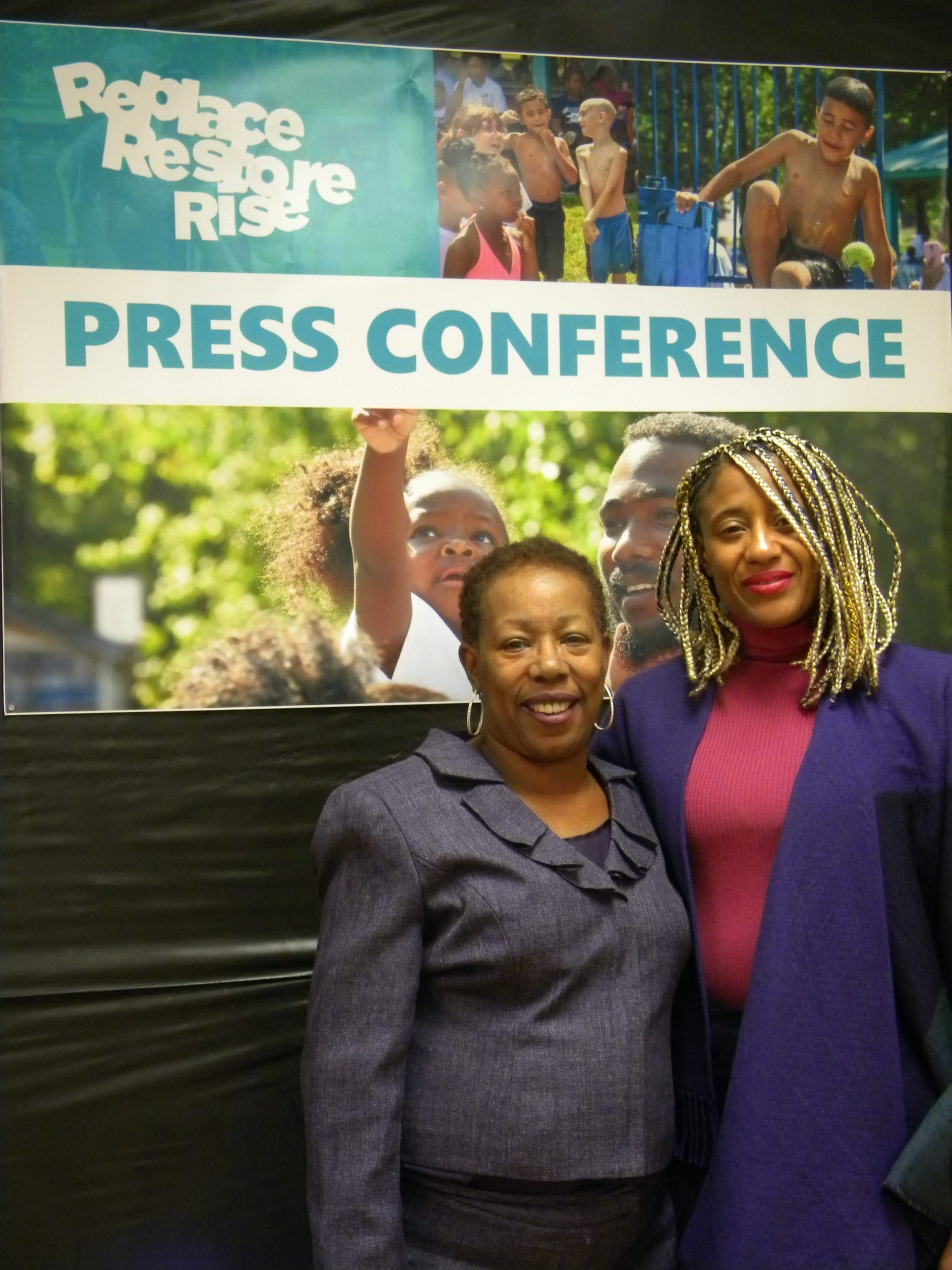 The Replace, Restore, Rise press conference, held Feb. 27, accomplished its mission of letting members of the public know how clean water is to be provided for churches and the some of the  most vulnerable populations in Flint. The press conference took place at Hasselbring Senior Center.

Beverly Lewis, executive director of Hasselbring Senior Center told National Clean Water Collective (NCWC) and the Flint Courier News about some of the problems the seniors who utilize the senior center have. Some have skin conditions that got worse because of the Flint Water Crisis. Other seniors have fear of using Flint water, even with filters. Lewis felt the community needed to know about the NCWC, the projects the organization has already done in Flint and the upcoming projects they have for sustainable solutions to the Flint Water Crisis.

The National Clean Water Collective (NCWC) is a registered non-profit grassroots organization that has provided more than $250k worth of vital supplies and support to the residents of Flint. They developed a short-term relief plan that provides immediate assistance and are establishing a network of activists, volunteers and other organizations around the country to help develop long-term solutions for a more sustainable Flint and nation, according to organization’s website.

The NCWC wanted to share the work their doing for their next five projects in Flint with the public, according to Syrah Scott, executive chairman for the NCWC. These projects involve installing clean water technology at community centers and churches.

“I think it’s important to be transparent with the community. We wanted to share the model we’re using to actually accomplish providing clean water to the city,” Scott said.

“We’d like to finish all the projects by April. I think the press conference helped boost more awareness,” Scott said.

She said the NCWC selected the places in which the clean water technology would be installed based on both relationships she had with community centers and churches and the need.

“I know that Sylvester Broome hosts a lot of kids, and it’s important for them to make sure they’re having clean water in their building. In regards to the senior center, I think it’s important to support our seniors. They are our lifeline,” Scott said.

The Hasselbring Senior Center supports a lot of the NCWC’s missions.

“I thought it would nice to do an exchange and give them something, as well.”

Since the north side of Flint was hit the hardest and seniors have the most voting power in the community, the Hasselbring Senior Center was made a top priority, according to Scott.

“If seniors aren’t able to vote how do people get put into position? We have to take care of our seniors. They took care of us when we were younger.”

At the First Union Baptist Church, one of the members also supports NCWC’s events and requested the organization help her church.

“We saw that ‘wow’ this is a community of young and old folk, and we wanted to support them.”

Cathedral of Faith is primarily a school.

“They basically needed support. It’s a huge school. They cater to a lot of kids.”

At Canaan, one of NCWC’s first panel discussions was held.

In 2019, a clean water technology system was installed at Haskell Community Center.

The goal of the NCWC is to work with the city to help them push the project forward, according to Scott.

“It’s important that they know every step of the way that we have the city’s back and that they know what’s happening with the work we’re doing. In addition, we wanted to let the public know we’re in it for the right reasons.”

The technology being used was developed over 12 years ago to take out arsenic. There are about 85 of the systems in Flint.  They had been tested and installed in conjunction with the city approximately four years ago in order to take the lead out the water.

“People are still able to use their water.”

To install the technology at the Haskell Community Center was about $30,000, including an event in March put on by the NCWC to celebrate and make residents aware of what was done. Copper pipes were put in by Goyette Mechanical, in addition to the filters being installed, which was also very important. It costed about $22,000 for the water project itself, according to Scott.

The project at Hasselbring will cost approximately $11,000. The cost is determined by the flow rate, the size of the building, usage, how many fixtures are in the building and other variables.

The technology is called the Filter King 03. The filter media inside the filters is designed to remove lead, copper and other heavy metals. The trick is to be able to recycle that media without causing legionella, which kills over a shorter period of time than lead, according to Steve Christiansen, a lead engineer for Ozotech Inc., who is also a Flint resident. The technology put on the system is ozone technology. So, every time the system regenerates itself it takes on ozone gas to disinfect it. Ozone is a disinfectant which is about 3,000 times more powerful than chlorine.

The NCWC’s holistic and long term solution to the Flint Water Crisis is to replace all tainted pipelines (where there are lead pipes), install point of entry lead removal treatment systems, install point of use bottle filling stations, to provide quality water testing and reporting and to spread water education, according to a video that was shown at the press conference. Private residences are also a priority of the NCWC.

Calvin McQueen, president of Flint Police Activity League (PAL) and one of the founders of the National Clean Water Collective, said Haskell Community Center was where he and others swam, roller skated and bowled. To him, it was quite unfortunate to see the water situation caused activity to die there. However, the clean water technology has helped things start to go back to normal there for kids, staff and families.

Danny Knight, a trustee at First Union Baptist Church, said during an audience participation portion of the press conference he was very excited about the clean water technology being installed at his church.

“I think if we find a way to help individuals get this around our whole community, it will probably help us get beyond this disaster,” said Gregory Martin, who attended the press conference and is a member of Hasselbring Senior Center.

The NCWC goal is to raise $50,000 and continue the work in Flint. To help support the National Clean Water Collective, email info@nationalcleanwater.org.

32nd Salute to Black Scholars by the Urban League of Flint

Chief Financial Officer for the City of Flint Resigns