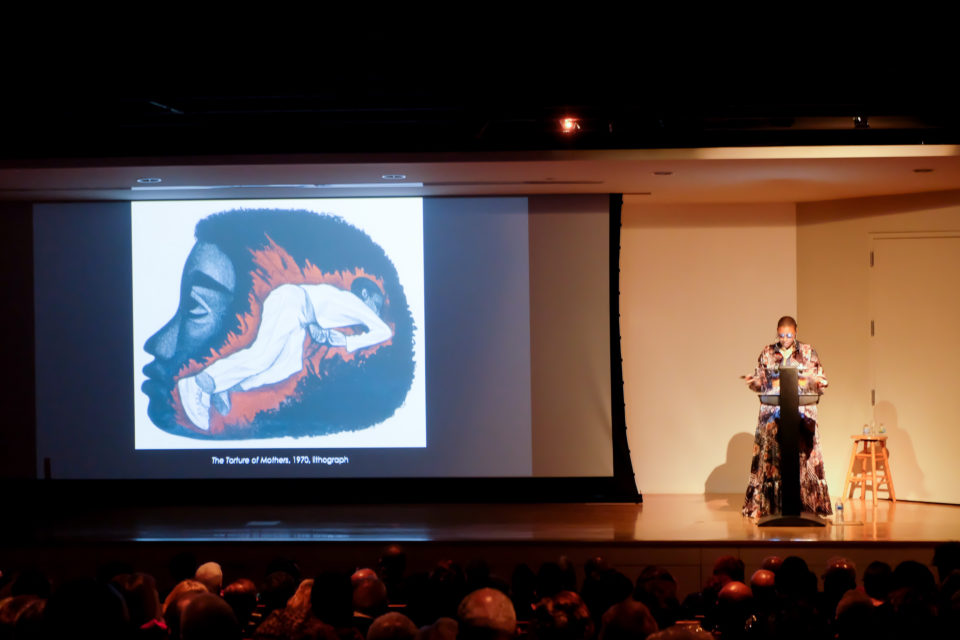 In thinking about modality and how we make space-whether in museums or in our own homes, Dr. Kelli Morgan quoted Ernest Gibson during her Jan. 26 presentation introducing the 13th Annual Community Gala.

It was important to Morgan to be able to speak in Flint for the gala. Her presentation was titled A Manner in Space: Black Modality in African American Art.

“For one it was about celebrating the gala and the fact there is such a sound relationship between the FIA and the African American community in regards to both fundraising and acquisition. The fact they are in their 13th year of the event is significant. Secondly, it’s about me continuing my relationship with the organization, particularly my colleague Tracee Glab (curator of collections and exhibitions at the FIA). They first brought me to the FIA in 2017 for the Black History Month Talk. That went really well. So, it’s a continued relationship with the institution,” Morgan said.

The first artist Morgan featured was Henry Wilmer Bannarn; a major Harlem Renaissance artist. The piece was called “Ironing Day;” 1949, a gouache on board piece. Morgan asked the audience members to remember the days when they had to iron the sheets.

“These were spaces in which our grandmothers got to rest by themselves,” she said.

Morgan highlighted the art of her favorite artist, Elizabeth Catlett. Her piece “Flowers for George Jackson,” 1975, was a woodcut on paper piece. In 1961, George Jackson was convicted of armed robbery and sentenced to one year to life in prison for stealing $70 at gunpoint from a gas station. He became involved in revolutionary activity while in prison and wrote two bestselling books. Although Jackson was killed during an attempted prison escape, the art piece displays him with children’s faces and flowers in an attempt to humanize him, according to Morgan.

“The Torture of Mothers,” 1970, also created by Catlett; a color lithograph, brought terror into the eyes of many audience members. It featured stylized arms and visualized the thoughts of a mother who has lost her son to police violence.  His dead body is shown in the shape of a fetus inside of her head.

Damon Ross, of Flint, said Morgan was a “dynamic” speaker who did a good job of contextualizing.

Alonzo Simpkins, III, another Genesee County resident, said he appreciated the way Morgan blacked out the image of a body that had been lynched in another artwork, which he recognized.

“What she decided to do is not give that part of the photo any attention, but to focus on the people at the bottom doing the lynching, which was very wrong,” Simpkins said.

Errin Whitaker, of Flint, enjoyed looking at the Community exhibit after the presentation. He said pieces by living artists Judy Bowman and Lavarne Ross really spoke to him, inspiring him as an artist himself.

Flint Institute of Arts attendees are able to vote on their favorite among three art works from the Community collection, located in the Hodge and Henry Galleries. The work with the most votes will be purchased by the Flint Institute of Arts. Attendees voted for each of the three works at the event.

“Mequitta paints Le Damn using her own body to work through both cultural and formal issues-then reworks it again, rendering the painting itself in black and white to delineate the past, while presenting the actual painting in the gallery as a future site. It’s a site where not only does she announce her pregnancy, but using the tools that she knows best – her studio and artist materials – paint and canvas – she creates space in the world for her child. In this way, Ahuja is seeing through time. She’s using one work to connect all three of her visions,” Morgan said.

Picasso’s piece, “Les Demoiselles D’Avignon,” upheld as one of his masterpieces, featured prostitutes. He spent a lot of time in Spanish and French brothels. In putting black masks on the white prostitutes he was substantiating the idea that any kind of problematic sexuality is connected to African women’s sexuality, according to Morgan.

Another piece the public can vote for is “The Gift of Lineage #5”, 2018; an acrylic, bristol board, metal leaf, natural and synthetic fabric polyester and cotton thread on wood panel by Stephen Towns. In it, an African American woman is pictured with a halo around her head. The artist was quoted as saying “I like to imagine how different the world be if we had the ability to look at every person as a saint.

Whitaker’s favorite piece was “Aina,” 2016; an archival pigment print on German etching paper by Ayana V. Jackson. “Aina” is from the series of eight photographs titled Dear Sarah and features a black woman wearing a white dress with her hands held out and towards her body.

“She appears to be in a holy spiritual state. She was not dead. That’s where I see African Americans today. We always need to be praying or meditating,” Whitaker said.

Voting on the three works of arts is expected to take place through mid March.

Expungement Fair to be held June 2