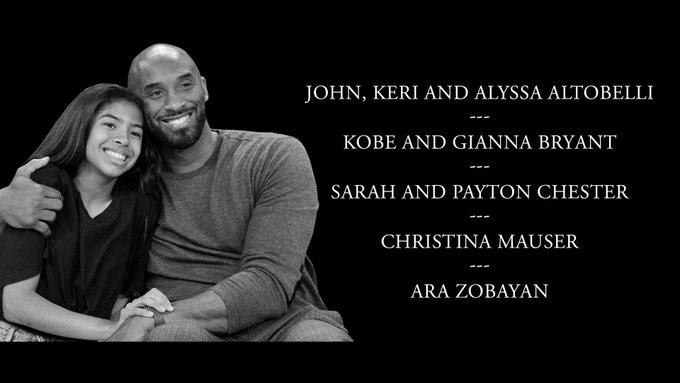 On February 2, about 40 minutes before kickoff of Super Bowl LIV on between the Kansas City Chiefs and the San Francisco 49ers, both teams lined up at the opposing 24-yard lines, in reference to the jersey No. 24 Kobe Bryant wore later in his career with the Lakers, for a moment of silence to honor Bryant.

A tribute was given at Super Bowl LIV for Kobe Bryant, his 13-year old daughter Gianna and the other individuals who recently died in a tragic helicopter crash.

An image displayed on a screen showed Bryant and his daughter, as well as the names of mother and daughter Sarah and Payton Chester, baseball coach John Altobelli, his wife; Keri and their daughter Alyssa, basketball coach Christina Mauser and pilot Ara Zobayan-all of whom lost their lives Jan. 26.

Jennifer Lopez and Shakira also agreed to honor Bryant when they co-headlined the event’s halftime show.

The crash on Jan. 26 took place in Calabasas, California. The group was on their way to an AAU basketball game that Gianna was set to play in.

Bryant, who was only 41 when he died, played his entire 20-season career in the National Basketball Association (NBA) with the Los Angeles Lakers and is widely regarded as one of the greatest basketball players of all time.

A tribute to Chris Doleman; a defensive end for the Vikings who died Jan. 28 at the age of 58 after a battle with cancer was also given.

Doleman was inducted into the Hall of Fame in 2012. He had had surgery in January 2018 to remove a brain tumor.

Ruth Mott Foundation has appointed Handy Lindsey, Jr. to be the Foundation’s next President

Financial Tips for Parents to Teach Their Children

Alert: the city needs your vote