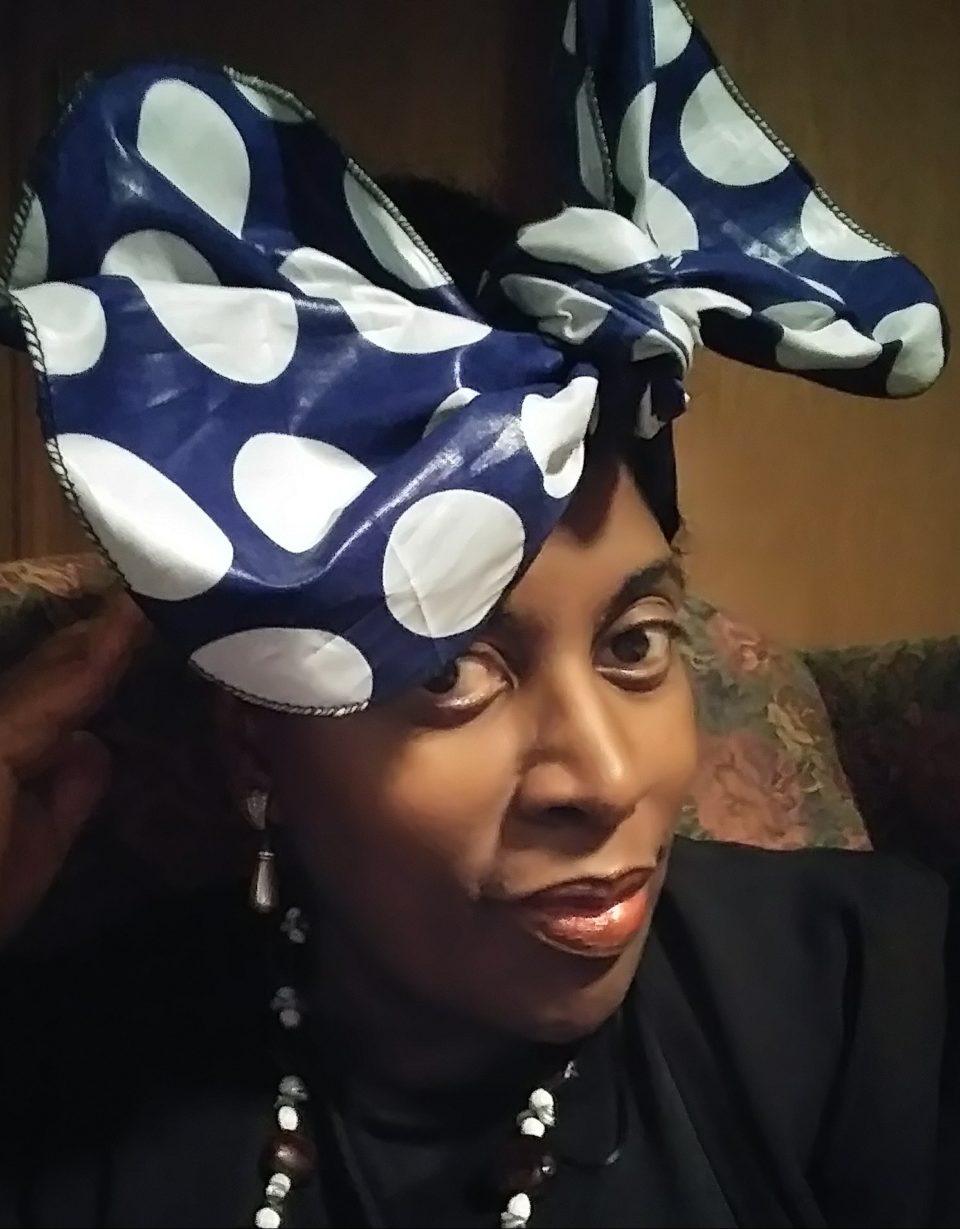 Following heartfelt welcomes by Tracee Glab, curator of collections and exhibitions at Flint Institute of Arts (FIA), and John Henry, FIA’s executive director, a dramatic piece called Something Called War performed by Flint’s fist poet laureate; Semaj Brown and Billie Scott Lindo, mesmerized the crowd recently during an FIA performance. Both Brown and Lindo wore elaborate head pieces created by Rosie Ray Henderson. The scene took place in the year 10,000 post earth. In it, social archeologists offered their interpretations of 19th century American civilization. The foremost authority on humanoid studies Dr. Beyond was introduced.
Consciousness and Assistant Lingering Humanoid Consciousness played by Brown and Lindo were presented to tell the story of what happened to humanoids.

Dr. Beyond explained humanoids only utilized five percent of brain capacity. Assistant Lingering Humanoid Consciousness asked why humanoids engaged in the activity they did.

“We really do not know but carbon samples of elongated oxygen producers or trees will be presented during the extinction series,” Dr. Beyond answered.

According to Dr. Beyond a major contributor to their extinction was segregating into “something called race.” Futhermore, she said a theory was that race was merely a hallucination; a symptom of a psychosis. She also described “something called war” as an extreme killing compulsion; a syndrome organized around hallucinations of power.

“They lynched the planet,” she said.

According to Dr. Beyond, humanoids developed advanced computer systems to advance society while neglecting the ultimate technology of heart and soul-the capacity to emit love and receive love.

“The first thing that comes to mind is it was deep for Semaj to be able to look into the future and envision the future looking back at us as humanoids, not necessarily as emotion beings-but to look at the logic or lack thereof of how we engage with each other and how we have progressed through time,” said Ashnee Young, who was spellbound by the performance.

Young said Something Called War, the telling of the tale of humanoids, was her favorite part of the afternoon’s performance.

“I thought the first part was very insightful, and it made me more excited to learn more about Semaj’s work and how she could potentially collaborate with our youth and the Children’s Defense Fund (CDF) Freedom Schools movement.”

Brown told the audience members she never knew that by carefully observing a charcoal on wood called Epoch created by Whitfield Lovell she would be able to take her own glimpse into the future. The image in the piece was taken from an old photograph of a World War I soldier. It reflects on the fact African Americans were fighting for a democracy which they themselves were denied.

Brown read a poem from her book Bleeding Fire! Tap the Eternal Spring of Regenerative Light: Conversations in Poetry and Prose. The poem was called ROAR; Rhymes of Applied Rights. Brown asked what if little girls sang songs while jumping rope such as “a,b,c don’t touch me. Four, five, six, none of your tricks. Seven, eight nine, if I say no, don’t cross this line.” Brown imagines the little girls would have songs like this so engraved in their minds that when a predator approaches them in the wrong way they would know how to respond.

“Violence against me you should dread. Tables have turned. I’ll leave you for dead,” she recited.

Brown explained how making affirmations about what one wanted but didn’t have was part of classical African spirituality, which she studied as she studied Marie Laveau for a piece of poetry she composed for the FIA about a color pencil drawing over lithograph by Renee Stout named after Laveau.

“By saying ‘I am,’ that was the power. So, Marie Laveau, this historical figure, practiced classical African spirituality,” Brown said.

She sang the song “When the Saints Go Marching In” then sang “how many times can they kill me? How many times will I die? We were never born to them. We will never die.”

“She seated affirmations of I can I will I am. She was a hair practitioner in the head worker business.”

So, she wrote a song called the Freedom Tree Song.

She sang “this tree is free.”

Brown studied with Joseph Striplin; the first African American in the Detroit Symphony Orchestra. She credits her mother with providing a world of literacy and took trips to Stratford, Ontario every summer alongside the Broadside Press poets. The Broadside Press is the oldest black-owned press in the United States still in operation.

“I was super excited about the shout outs Semaj gave for the local programs. For her to shout to Bethel United Methodist Church and Mt. Olive Missionary Baptist Church was powerful. It really resonated with me because eight or nine years ago I was doing everything I could to learn about the CDF Freedom Schools program and ensure it was present in the city of Flint. In that moment, she brought clarity to some of the champions in our community, focusing on their great works, and that made me very proud to be in the room. Our youth are not only the future, they are the present and it is a privilege to be able to serve them.”

Dedication Program for the late Rev. Dr. A. J. Pointer

Be A Tourist In Your Home Town!