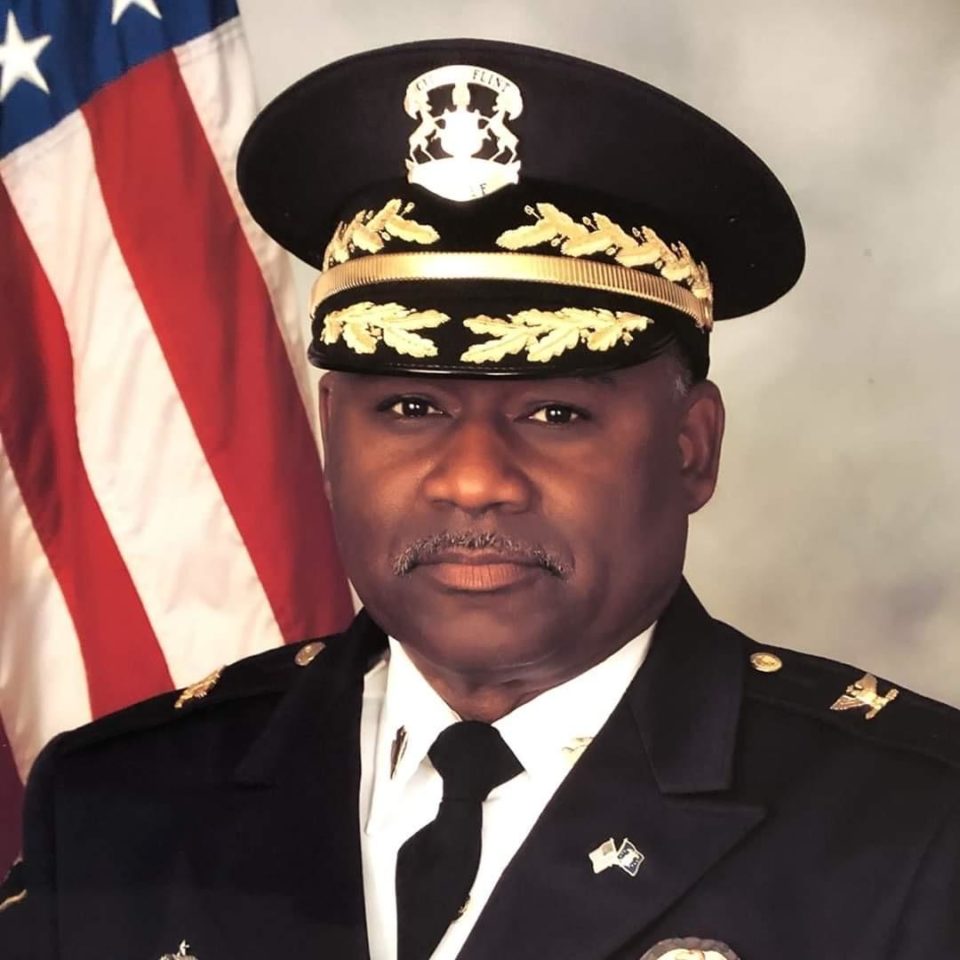 Photo: Former Police Chief Tim Johnson was one of many panelists who answered questions from residents at the recent Flint Matters Town Hall.

The event was brought to the community by Nation Outside-Flint Chapter and was intended to consist of panelists who have said Flint matters to them.

Dr. Herbert Miller led the attendees in a short prayer for the event and those sacrificing time and money to run for public office who are willing to “fight for the city of Flint.”

Former police chief Timothy Johnson said he would bring county resources to the city if elected as Genesee County sheriff.

“We know that the sheriff’s department has more resources than the city at this present time,” he said.

He said when he asked about $20 million given to the state police to police Flint be given to the city of Flint to police its own it fell on deaf ears.

“I would have the deputies policing the city. They have an obligation to the city, too,” Johnson said.

He said the sheriff’s seat is the most powerful seat in the county as far as the police are concerned.

Stephen Sanford, a republican candidate for Genesee County sheriff, is a former soldier who was deployed to Iraq.

When asked what his values are Sanford said he believes in equal justice, fairness and kindness.

“Do you believe a person is innocent until they are proven guilty?” a Genesee County resident asked him.

Sanford said he does, he is a firm believer in the Bill of Rights and he would enforce the amendments, if elected.

When asked by another resident if he knew of three constitutional amendments dealing with criminal law, Sanford answered the fourth, fifth, eighth amendments were among them.

A resident referenced a Clio case in which four individuals were throwing rocks off the overpass, intentionally trying to kill someone.

“They ended up killing a man,” Young said.

Young said what the general public may not know is these individuals exchanged text messages saying they should get teardrop tattoos to mark their first kill. The prosecutor has made a motion to dismiss all charges against these individuals because he only wants to sentence as juveniles

Judge Herman Marable is in his 20th year of being a district judge in Flint and said he may want to run for circuit judge.

A resident confirmed Marable still has a student of the month program. The program is for 10th graders countywide who write an essay about their career goals. The students of the month receive a cash prize and trophy and can shadow Marable for a day, as well as be in the running for student of the year.

According to Marable, one of his students of the month became an attorney and ran for state representative and she said shadowing Marable influenced her career choice.

Attorney Heather Burnash is running for district court judge. A resident asked her what she would do to help economically challenged people, if elected. Burnash told her she serves on the advisory board for drug court.

“People in drug court have to go randomly drug test, but they might not have transportation. So, we need to find out who gives out bus passes,” Burnash said.

She said she felt working outside the box is needed, and people who go to specialty court are less likely to reoffend.

She said she had thought about the possibility of having a specialty court for those affected by lead poisoning.

A resident asked Feaster how a judge advocates for victims. Feaster said a judge must have the appropriate punishment, make sure the offender gets rehabilitated and take into consideration the needs of the victim.

“We want to make sure the rehabilitation portion helps the person that was harmed,” Feaster said.

He gave an example that if a person was harmed by their car being stolen, the offender could work and have their check garnished to pay restitution for damages done to the vehicle.

Attorney Chris Christenson is running to be a circuit court judge.

A resident asked Christenson if he was elected how he planned to not criminalize poverty with regards to bonds.

“If someone is facing a life offense; they have been charged with a murder, unfortunately they are going to have a very high bond. If someone has been charged with possession of cocaine, which is a four-year felony, then I don’t think they should have a bond that keeps them in jail…

It would be about whether they’re a flight risk and whether or not they’re a danger to the community,” he answered.

Attorney Marvin Jennings, Jr., who has represented Flint, is running for one of the Genesee County Circuit Court judge seats.

Jennings said at one time there was a driver’s responsibility fee attached a no proof of insurance conviction costing $500 a year for the next two years. He was able to help in the situation while working in the past.

“Instead of them being hit with no proof of insurance it was no proof with proof, which takes you out of the driver’s responsibility fee. We know who’s being the victim in all this. So, we just want to make sure we’re being fair and just,” Jennings said.

One resident described a scenario in which a woman works at McDonald’s making $200 a week, she gets stopped and doesn’t have a driver’s license. She gets her car towed. The first day to get it out it’s about $300.

“What can we do to stop that?” he asked.

“If we lower people’s expenses more people are going to be able to drive legally and not get in the situation where they don’t have a license,” Ford said.

Ford said even if a criminal justice reform doesn’t pass for this, it should be brought up.

CEO Mom is Driven to Help All Kids Feel Special