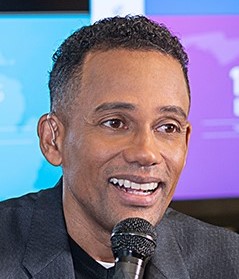 Photo: Hill Harper; an actor, author and activist who launched a Go Fund Me Campaign with the National Clean Water Collective

The National Clean Water Collective is determined not to let the coronavirus pandemic stop them from their mission to help the citizens of Flint-and they’ve instead changed the way they will go about doing it.

The National Clean Water Collective (NCWC) is a registered non-profit grassroots organization that has provided more than $250k worth of vital supplies and support to the residents of Flint. The National Clean Water Collective team has been helping the Flint community for more than four years. They started with emergency support and later developed sustainable solutions and adopted proven water technology to implement across the city.

On February 27th, they held a press conference at Hasselbring Community Center and announced their next five clean water projects. The projects were to take place at First Union Baptist Church, Hasselbring Senior Center, Canaan Baptist Church, Sylvester Broome Empowerment Village and Cathedral of Faith Ministries. Syrah Scott, executive chairman for the NCWC, told the Flint Courier News she wanted to have the projects done by April.

Then, COVID-19 hit the scene. Instead of losing hope, the National Clean Water Collective team decided to pitch in to supply disaster relief. The immediate goal is to provide 46 pallets of purified boxed water within the next two weeks, according to Scott. The first 23 pallets have already arrived to the city.

The National Clean Water Collective launched a Go Fund Me campaign with actor, author and activist Hill Harper in early April. Harper, known for his roles on CSI: NY, Limitless, and The Good Doctor, posted an urgent call for donations to provide clean water for the residents of Flint during the COVID-19 crisis. The post, which included a video clip, received 4,010 likes and 289 comments and over 20,000 views.

In Harper’s post he asked for his fans and followers to help raise $24,000 initially ship 9,700+ gallons of water to Flint as soon as possible. Now, according to information found at https://www.gofundme.com/f/covidrelief4flint, $37,907 has been raised of a $50,000 goal.

“Residents of Flint, MI have been suffering these past six years fighting the life-damaging and lethal effects caused by the lead found in their water system,” Harper said in the Instagram post.

“Today, city’s plight deepens with the scarce supply of clean drinking water available during this pandemic,” he continued.

Harper pointed out Flint is one of the poorest cities in the country with 41% of the residents living below the poverty line and most all residents with no continuous access to clean water. He said he would personally pay all administrative fees so every dollar given could go straight to purchasing the water.
The first 5,000 gallons water will be distributed at: St. Mark Missionary Baptist Church-3020 Dupont St., from 12-1:30 p.m. April 22, from 10 a.m.-2 p.m. April 22 at Martus/Luna Food Pantry- 2101 Lewis St. and from 10a.m-2p.m. April 23 at St. Luke New Life Center, 3115 Lawndale.

Harper thanked Scott, the National Clean Water Collective, WS Darley & Co. Water, Turtle Plastics, HMD Trucking, Wristsponsible, Food Bank of Eastern Michigan, Renée Kaswan and everyone who has given to the Go Fund Me campaign so far for making this possible.