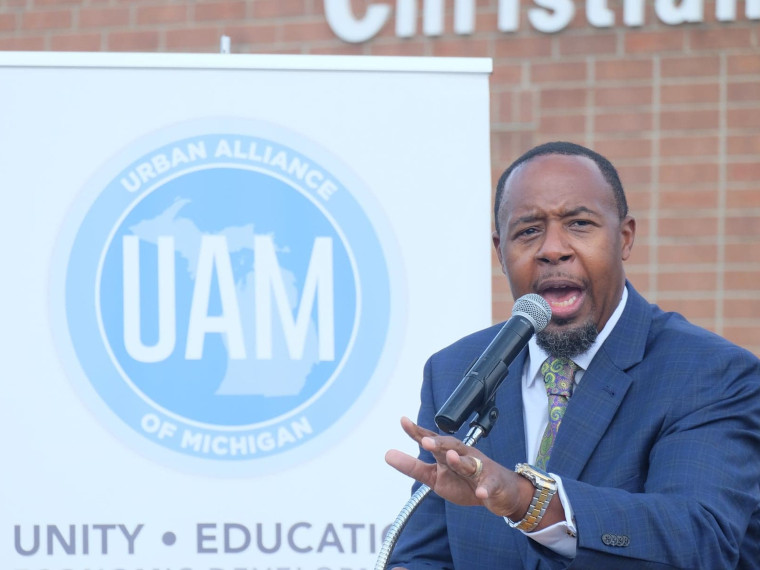 With about a month to the election, the Urban Alliance of Michigan, along with the Flint Unity Coalition of Pastors had a goal to hit everybody hard and let them know they can’t waste any time when it comes to getting out and voting! A press conference took place at 11 a.m. on Saturday, October 3 at the North Flint GOTV (Get out to Vote) Headquarters, located at 1610 W. Pierson Rd. The event was intended to encourage people to vote whether in person or absentee and kicked off the grand opening of the north Flint GOTV headquarters.

Individuals in north Flint will be able to go to the headquarters to receive yard signs and literature on the candidates they want to support. It is also intended to help spread the word on the importance of voting for them. In addition, information will be distributed from the headquarters office to encourage residents to fill out census forms.

Pastor Chris Martin, Flint GOTV director, said the organization heard there will be voter intimidation tactics used to discourage African American and other voters from casting their ballots-but said they will be ready for that.

Martin said the Biden-Harris ticket represents the views of most working class individuals, as well as people of color.

“The Urban Alliance thought it only fitting that we endorse the ticket that represents our values,” he said.

Because Biden and Harris have both been to Flint several times and both will come back, Martin said they have shown a commitment to Flint residents to work within the confines of helping local neighborhoods.

Mayor Sheldon Neeley was present and spoke at event.

“I’m not saying who to vote for; I’m not trying to tell them; but I just want them to engage in the greatest American right,” he said. “If you’re a person of color, the 13th, 14th and 15th amendments are really important to our Constitution. We had to fight for this right through poll taxes, literacy tests and a whole Civil Rights struggle for us to get there. If you’re a woman, the 19th Amendment, suffrage. We had to really fight for the right to be able to engage in this process.”

He asked anyone who was mailing a ballot in to do so by Oct. 19 to ensure it gets to the clerk’s office in time.

“There will be five remote locations throughout the city of Flint with drop boxes where you can drop your ballots,” Neeley said.

Residents can drop off the ballots at four fire stations or the police department, as well as in front of Flint City Hall.

Neeley said all Americans should be educated about what is on their ballots, including about statewide proposals, the non-partisan portions of the ballot, the judicial sections and school boards.

Neeley said he believed the Biden-Harris ticket would solidify the need for a national healthcare system that supports and helps all Americans.

“Just starting with healthcare, which I think is probably the biggest issue facing the country right now,  is also the difference between the Biden-Harris ticket and the Trump administration, which right now is suing in the federal court and will be in the Supreme Court to try to eliminate the Affordable Care Act,” said Congressman Dan Kildee, U.S. Representative for Michigan’s 5th congressional district since 2013, who is also being endorsed by the Urban Alliance of Michigan and Flint Unity Coalition of Pastors.

Kildee pointed out if Biden is elected he will drop the lawsuit right away.

“Then, we can work to fill in the gaps that exist with healthcare right now,” Kildee said. “To me, that’s the most fundamental first step; making sure we continue to try to make sure there’s health insurance, health coverage for every single American.”

On environmental issues, whether it’s clean drinking water or protecting the Great Lakes, with a Senate that is in the Democratic majority, Kildee said they could pass laws that protect human health, create a standard for PFAS and reduce the allowable level of lead in drinking water.

“My bill; the No Lead Act, could become law, which would take it down from 15 parts per billion to five. As important as that is that you have a president that would enforce the laws that are on the books.”

“We are much stronger together than we are apart,” Evans added.

The Michigan Supreme Court ruled Oct. 2 Gov. Gretchen Whitmer does not have authority to issue or renew executive orders relating to COVID-19 beyond April 30, when the Republican-controlled legislature passed a resolution to extend the state of emergency.

“What the case shows is the importance of state Supreme Courts and how they can affect the public deeply with their decisions,” Welch said.

As a judicial candidate Welch cannot endorse in partisan races.

She said she also wants to work for communities like Flint across the state.

“I think the importance is knowing the Supreme Court has administration authority over the court systems as a whole in the state, and it’s one of their fundamental jobs to make the court systems work,” Welch said. “That is something that is really, really important and could affect communities a lot. There’s a lot of really important work started to look at the criminal justice system and how it functions in our communities, as well as issues of access to justice issues; people who can’t afford lawyers and figuring out how to make the system work better for them.”

Some of that work has started under the Chief Justice Bridget McCormack’s leadership, and Welch said she would be committed to work with her on it. Welch is running alongside McCormack.

“We just hope you take this momentum to the  polls,” said Rev. Ralphael D. Read, senior pastor of Mt. Carmel Missionary Baptist Church to  attendees at the end of the rally.

Up to $1,000 available to 2020 high school graduates because of pandemic