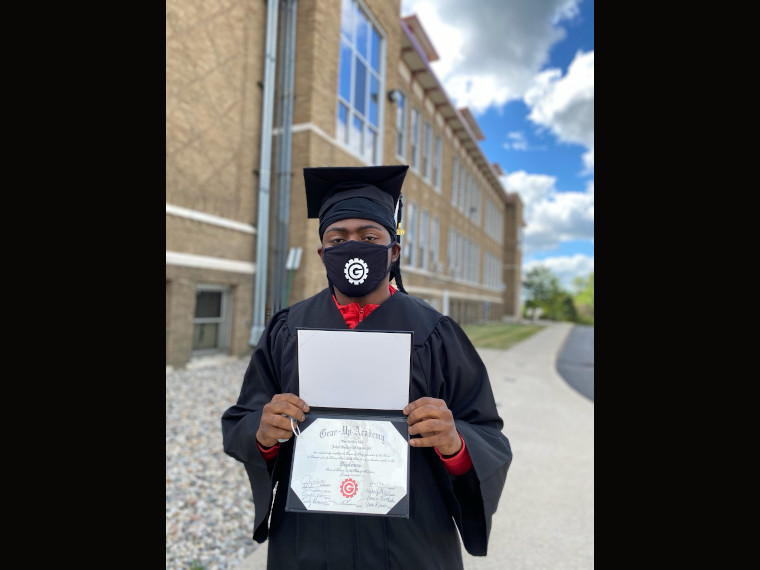 GearUp Academy starts its 2020-2021 school year at a new location, which the high school moved to in June shortly after the pandemic hit the area. The academy, formerly located at Bethel United Methodist Church, is now housed inside of the Sylvester Broome Empowerment Village. Last year, GearUp Academy Middle School, officially named GearUp Invictus, was launched in the building after many of the school’s high school students said they wished they would have had the benefit of having the academy in their younger years.  Now, the high school program will be there as well. GearUp to Grow; a new program starting in the 2020-2021 school year, is geared for elementary aged students in grades 4-5. A GED program is likely in the academy’s future, according to Kelly Rodgers, high school program director. Rodgers said it is not uncommon for multiple siblings of various ages to end up attending the academy.

“We just want to love, lift and support the children of our community,” Rodgers said.

GearUp 2Lead is a local non-profit, which hosts an annual conference. The conference was canceled this March, but 1,100 children from all over the county attended the last one.

“We also have a growth mindset curriculum,” Rodgers said.  “That’s what the ‘gear’ is about.”

“We’re about skills are built not born.”

GearUp2Lead began as a leadership development program. Winston Stoody took over as executive director in 2016.

Rodgers, who lived in Dallas for 25 years, said she moved back home to Flint to live with purpose and be a catalyst for change in her community. She was asked initially to be a board member to GearUp2Lead.

“Stoody and I both said we’ve got to focus on this,” Rodgers said. “There are 4,000 children in Genesee County who aren’t working or going to school.”

In the past, GearUp Academy had a partnership with the courts and has been able to work with youth on probation. Last year, there were 70 children with 27 graduates from the program. This coming school year, Rodgers expects at least 90 students from the three programs combined.

“Most of our children have nothing. We deal with basic survival day to day.”

Poverty, learning disabilities due to lead poisoning and crime within about 75% their families are just some of the obstacles the students have upon entering the academy. According to Rodgers and Stoody, many of their high school students lack basic reading and math skills. Students get a Fenton Area Public Schools diploma, which also says GearUp Academy upon completion of the program. GearUp Academy also has a computer lab in Fenton.

“We run through Fenton Area Schools…We were already online…We run all our core classes through Fenton. There is a teacher behind each who students can communicate with. In person, we focus on social emotional learning-like how to stand up straight, how to pull your pants up or how students will go about getting jobs.”

Rodgers said GearUp Academy students are given structure, routine and survival skills for the real world. Rodgers said it is important these children get the opportunities GearUp Academy offers so they don’t end up as part of the prison system-or end up dead. The individualization of the program for each student is what makes the GearUp Academy so successful, according to Rodgers.

Gear Up Academy students have collaborated with professionals and community leaders through off site field trips and workshops.

“We also have a program that we’re doing this year where we will have mentors that can meet with all the students online, virtually.”

Through Project Citizen, GearUp Academy students identify problems in the community, as well as possible solutions. One student received credit for Civics class for taking her idea in front of a decision making body after failing the traditional Civics course twice.

“She had a problem with the so-called curfew in Flint,” Stoody said.

The problem was it was not being enforced.

“Her solution was to enforce it or change it to something you can enforce,” Stoody said. “She went to the city council meeting…Instead of complaining, she had ideas for potential solutions. The whole council gave her a standing ovation. Her parents were so proud, but more importantly she leaned she does that power and that ability to affect change through policy.”

“The majority of our students just say we’ve given them hope,” Rodgers said.

“I was always told I was gonna be dead or in prison, and I’m dumb and I won’t be anything,” said John Williams; GearUp Academy graduate.

I believed everything, but seeing the diploma in my hand and (the GearUp Academy staff’s) happiness for me made me realize I accomplished something no one thought I could and said I wouldn’t I have,” Williams added.  “I have friends that have died or dropped out because of issues in life who haven’t gotten to experience this feeling, and I’m just overwhelmed with happiness”

GearUp Academy was open Monday-Thursday 9 a.m.-4 p.m. with students having flexible schedule options. Because of COVID-19, there is some uncertainty about the hours the school will be available for in-person interaction, which is tentatively expected to begin October 5. Temperature checks and continuous sanitation are currently taking place on site at GearUp Academy. Small groups of five are expected in October.

In person interviews for GearUp Academy are taking place with one parent or guardian and one student a time being allowed in the building for interviews. Individual orientation meetings are planned for September 9-10.