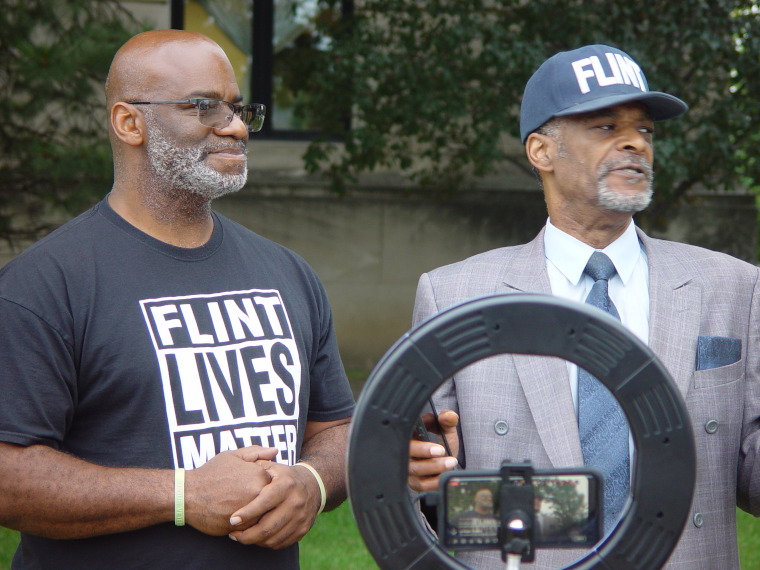 Judge Judith Levy will listen to residents’ verbal objections concerning the fairness of the Flint Water Crisis Settlement on July 13. Attorneys spoke in front of Judge Levy via Zoom on July 12, and pro se objections will be heard on July 13, starting at 10 a.m. The session was held at Genesee County Circuit Court, in Judge Joseph J. Farah’s courtroom.

Some residents gathered in front of the Genesee County Circuit Court building to support Former Flint Mayor Dr. Karen Weaver during her broadcast on 910 AM Superstation-WFDF on July 12. Many of them spoke to the Flint Courier News regarding their views on the fairness of the settlement.

Dr. Weaver said she will speak at 1:15 p.m. July 13. She has several concerns with the settlement, including the amount, the distribution, the documentation being required, the $1,000 cap on property damage, the fact the discrimination piece has been thrown out and the amount the attorneys are getting. She said the current governor campaigned on making Flint whole.

She said more elected officials should be showing up defending the people they’re supposed to represent.

“One of the big things is that the attorneys are getting the most money,” said Jameca Patrick-Singleton, a Flint resident.

Lawyers involved in the settlement of civil lawsuits arising from the Flint water crisis would receive up to $202.8 million in attorney fees. These fees and other costs would leave about $431.3 million to be distributed to up to “tens of thousands of” Flint residents.

Patrick-Singleton also said objectors are upset about the breakdown of settlement dollars to residents. Nearly 80% of payments going to those who were under 18 at the time of the crisis, who are particularly vulnerable to the toxic effects of lead. Approximately 15% would go to adults and 3% for property damage.

“The average adult had some damage-psychological, physical or otherwise,” Patrick-Singleton said. “In the beginning of the crisis, there were a lot of doctors not linking things that occurred with skin, hair and things like that to the crisis. So, you don’t have all of this paperwork that you need. So, it’s really not fair how the money is being distributed.”

“We know that people may almost think this is the end, but we have to have a voice,” said Tonya Burns, Flint resident and activist.

She said she has been taking part in protests about the Flint Water Crisis since 2016.

“This is an unfair and unjust settlement, and I don’t care if they take it back to trial at this point,” Burns added. “Families are not made whole, and that is a huge problem.”

Burns, who is a Flint City Council candidate for the 6th Ward, also said there was more than lead in the water.

“There’s too many people that have been affected and that little money ain’t going to help us, said,” Freddie Fisher, Flint resident.

Fisher said the residents would be getting “nickels.”

“We gotta fight this thing,” she said. “We gotta fight for justice. We’re all human. We’re not less than. We need to do this right and come together and everybody get it right.”

A.C. Dumas, a lifelong Flint resident who is a candidate for Flint City Council in the 3rd Ward, will be the first resident speaking at 10 a.m. July 13.

“I’m gonna fire the crowd up and fire the judge up, and I’m going to speak about the things they probably don’t want to hear” he said.

Dumas was elected the president of the Flint branch of the NAACP.

“Now I’m the vice president, but I can’t serve while I’m running for office,” he said. “So mine is going to be from a historical perspective-one point of racism and how this was racist and how it’s funny that the judge kicked our NAACP claim out.”

The NAACP was filed a federal lawsuit over the water crisis March 31, 2016.

Dumas said he will also address the fact his mom was on a feeding tube and she died.

“I had to put the water in her feeding tube, and they said we needed to boil the water. So, we went on a boil advisory. All we were doing was boiling poison!”

2nd Ward councilman, Maurice Davis, was present July 12 and said residents should not have to ever prove damages because “everybody was affected by the water.”

Chris Del Morone, 6th Ward Flint City Council candidate, was present July 12 and will talk before the judge July 13. He will ask how it was determined who actually lived in Flint during the Water Crisis and will address several other concerns, including how confusing the deadlines were for paperwork to many Flint residents.

1st Ward councilman, Eric Mays, was present July 12 and will speak around 10:15 a.m., as the second resident speaker, July 13. He will talk the race litigation claims not litigated and the settlement being designed with an objection period, but no objection form, among other concerns. He was part of a group that created an objection form.

Arthur Woodson, community activist and veteran advocate, who is a Flint City Council candidate for the 2nd Ward, was also present to show support to residents and said he opted out of the settlement. He is hoping the judge does not approve the settlement and allows instead for further negotiation. He is also hoping a lot of the attorneys be investigated for potential malpractice.

Levy said she wanted to keep the litigation going forward as fast as possible while remaining fair to everyone involved.

Attorney Corey Stern, who said he represents roughly 5,000 individuals, said he was grateful for the objectors.

Stern then went on to say “this is not a settlement that happened in a vacuum or occurred overnight.”

“There wasn’t four lawyers in a room who just carved up certain details that would be best for their clients or for some group of clients,” he added. “This was a heavily negotiated process that occurred over two years, and virtually every detail from this settlement was contested from the beginning.”

Attorney Mark Cuker said the bone lead testing scan required to increase compensation went against the directions of the manufacturer and the scanner is not designed for humans.

“This thing was illegal, unethical, unreliable,” he said.

Assistant Attorney General Margaret Bettenhausen spoke on behalf of the state of Michigan and the state defendants in support of the court’s final approval of the settlement.

Bettenhausen said state defendants wanted to make sure all facets of this settlement-the amounts of funds, the allocation of the funds and the methods of recovery-were fair, adequate and reasonable-and they negotiated to do that as fast as possible. Bettenhausen said the sheer volume of those who signed up to participate in the settlement shows the large scale interest in moving forward with the settlement among the people she said it affects the most.