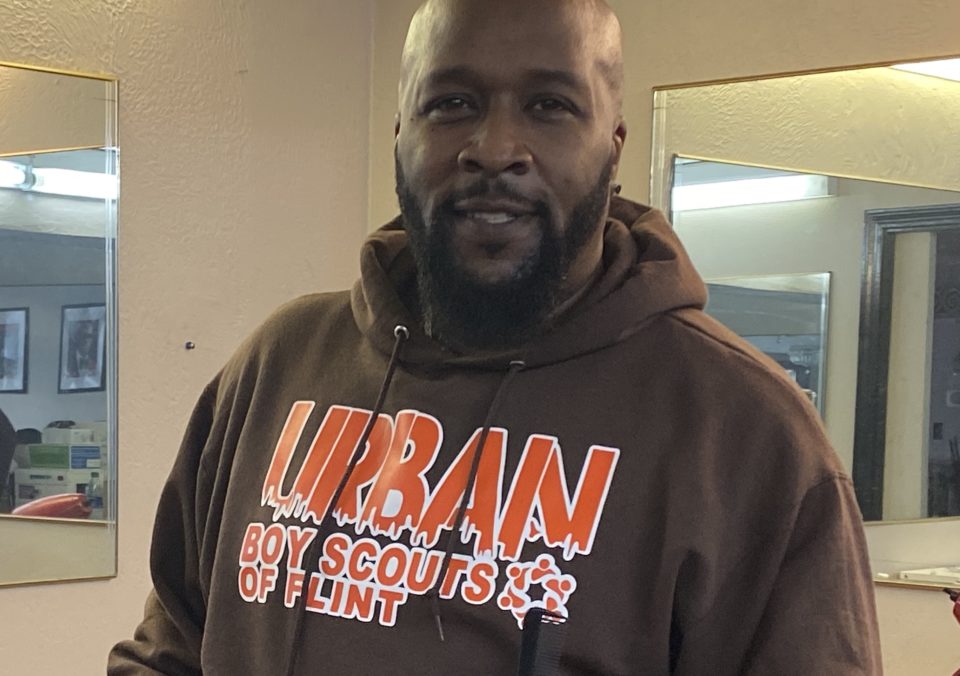 Flint, Mich. – Cory Moore is a highly sought-after barber who is making an impact that reaches well beyond the professional grooming services he provides his clients. Moore is the founder of Urban Boy Scouts of Flint, a male mentoring group he launched two years ago in response to observing the young men and boys who visited MVP Cuts on Flint’s South side.

“Being a barber for the last 20 years, I’ve noticed single mothers bringing their sons to the barbershop, which to me is not a mother’s job or a woman’s job.  So that lets us know there’s no male figure in that young brother’s life,” Moore said.

“Instead of waiting once every two or three weeks for that young man to come get his hair cut, we picked one day out of the week – Wednesday- our slowest day from 4 p.m. to 6: 30 p.m. to host Urban Boy Scouts of Flint. We teach self-respect, morals, goals and structure,” said Moore who also hosts the male mentoring workshops at Potter, Doyle Ryder and Freemen Elementary Schools.

“It’s a fellowship.  We call ourselves brothers. If one of the young men has a problem on any given day, we encourage them to share their concerns with us.  As a group, we talk about how we’re going to fix the problem. A lot of kids don’t have social skills. They don’t talk to each other anymore. Here, you’ll see a bunch of young men socializing and getting along with each other.”

“We have their attention in the right way.  We know we’re making an impact because they come back every week. We find that very gratifying.  We’re not trying to be their father-figure.  We’re trying to be their big brother; someone they can count on.  Also, we demand respect.  They respect us.  When we talk, they listen,” said Moore who hopes to expand the program nationwide.

There is no charge to participate in the mentoring sessions.  Urban Boy Scouts of Flint is open to young men and boys in kindergarten through 12th grade.  For more information, contact Cory Moore, CEO at (810) 282-6615.

Genesee County Friend of the Court Conducting Back to School Blitz