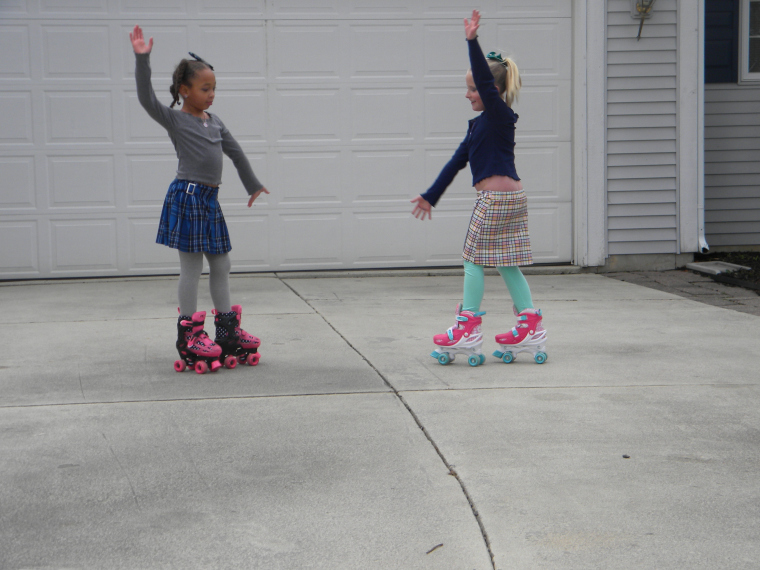 Featured photo: Rocsi Turner and Madiynn Ruegsegger entertained family, friends and neighbors for a worthy cause this holiday season.

Rocsi Turner got her first pair of skates for her 8th birthday…but her family, neighbors and friends were surprised when less than a year later she taught her friend next door to skate and the two of them raised $415 by putting on a skating show in the Turner household’s driveway for Hurley Children’s Hospital just before Christmas, with the donation set to be made officially next week.

According to 9-year-old Madiynn Ruegsegger the show was her idea.

“But she had the idea to do a thing for like our moms and dads,” Ruegsegger said speaking of Turner.

Ruegsegger learned to skate just the weekend before the show was held. The two young ladies passed flyers around the neighborhood.

When the big day came, they performed the songs “This Day” from the movie Jingle Jangle, “This is Me,” “All I Want For Christmas” and “Let It Snow.”

Though it rained at the start of the outdoor show and was cloudy and windy, the young ladies continued performing to the best of their abilities.

“We wanted to do a good thing for charity,” Ruegsegger said.

Turner said giving to charity will probably make them feel good and make them want to do it again with better weather.

Toyia Turner; Rocsi Turner’s mom, said the 30-35 attendees to the show were more than she expected.

“We didn’t have to do any encouraging,” Toyia Turner said. “It was all the girls’ idea…They did their own choreography. They planned it, and as the parents all we had to do is help them deliver the invitations and send out invites through text messages and calls. It’s ingrained in them they wanted to give back. Rocsi has had lemonade stands and maker’s fairs in the past with other friends for various organizations.

Kristy Ruegsegger is the mother of Madilynn Ruegsegger. She also credits her daughter and Rocsi Turner for coming up with the idea for the show themselves. She said the mothers only helped get together the snacks and tried to help with the show’s setup.

“We’re super proud of them, especially because they wanted to donate everything to the Hurley Children’s Hospital,” Kristy Ruegsegger said.

Andrew Brzezinski watched the skating show with his wife and daughter.

“I thought it was really neat that some kids in the neighborhood put this on and actually wanted to get some donations for a local charity,” Brzezinski said.

To Brzezinski, it is important to encourage children’s positive efforts.

“I think it encourages them to be more creative and as they grow it helps them want to do more things in their community,” he said. “I think with 2020 the way it’s been with the pandemic and everything, we all could use to donate a little to our community, and Hurley is such a great organization that serves the children in our community so well.”