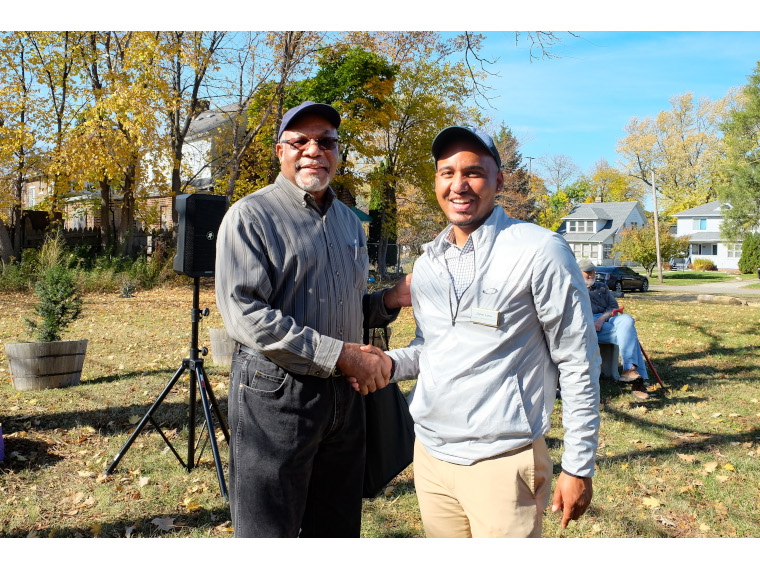 Last weekend, on Saturday, Oct. 22, King Avenue PLUS members invited community members to learn about the plans of candidates whose names are on the ballot for the Nov. 8 general election.

Mary Hood, a Genesee County Circuit Court judge candidate, said the event was important to her because of the location. Dr. Martin Luther King Jr. Peace Garden was the venue.

Hood said she loved the fellowship at the event and hearing community members’ viewpoints on various issues.

Hood said she would like to encourage everyone to vote on Nov. 8, no matter whom they are voting for.

“Exercise your right to vote,” she urged. “You count. You matter, and don’t ever think you don’t matter. It’s important you vote. That’s part of you standing up for yourself and believing that you matter.”

As with for Hood, for Kasey Calvert, candidate for Flint Community School Board member, this was one of several events he attended before the Nov. 8 general election. Calvert is a candidate for the partial term ending Dec. 31, 2024.

“As a resource coordinator, I’m always out at resource events gathering information and building relationships with the community partners,” Calvert said. “I take these same resources back to my community and have them ready for the residents and the community at large.”

Calvert added the event and the space on Martin Luther King are essential to the community. He referred to the garden as a “gem in this community.” He expressed gratitude towards King Avenue PLUS members for their work in helping to beautify the community.

Dylan Luna, another candidate for the Flint Community School Board also spoke with the Courier.

“I think it’s important to reach all parts of community, north, south, east and west,” he said.

Luna is seeking a six-year term.

Luna has associated himself with neighborhood associations, block clubs and groups since March 2022. He has been to at least 97 community events since then, and at least 20 have been part of neighborhood or block club meetings.

Luna said he had fun at the Dr. Martin Luther King Jr. Peace Garden. He met new people, met old friends and shared why he is running to be part of the school board and what opportunity there is to make a change.

Luna believes change at the city and county level starts with having a solid central school system.

“I think this election is a big opportunity to make a positive and transformational change for students in the city,” Luna shared. “I think the momentum is going in the right direction.”

Donyele Darrough, a candidate for the Flint Community School Board partial term ending Dec. 31, 2026, spoke to the Courier, too. Darrough is an attorney by profession and previously worked as a law librarian. She is looking to bring her literacy skills and the skills she has learned through her legal career to do her best to make a difference for Flint and the students.

“We’re all pushing for votes because we all feel that we’re qualified, and we want to win, she said. “But I’m hearing from a lot of people what they want and what they’re looking for in a board.”

Darrough said having 15 Flint Community School Board candidates means they’re all concerned and willing to put themselves out there.

“We’re just looking to make a change,” she stressed.

Local resident John T. Holmes attended the event to learn more about the candidates and the ballot.

At the event, he learned Prop 1 on his ballot would reduce the total time a politician can serve in the legislature from 14 to 12 years. It also would allow lawmakers to serve those 12 years in any combination of the state House or Senate.

Holmes stated he would like to see children have a better learning environment.

“With the school district, I hope the ones who are elected have more concern about the upkeep of the school buildings,” Holmes added. 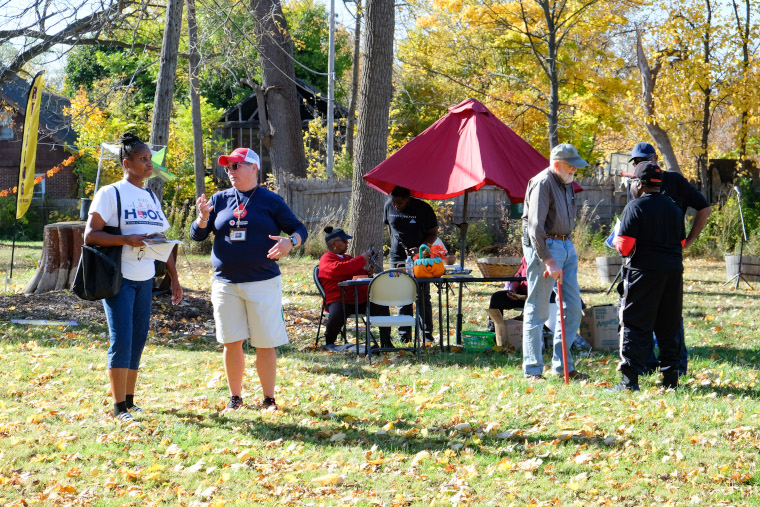 Another resident, Art Wenzlaff, attended the event and told the Courier he has always been passionate about the Flint Community Schools.

“My children went there, number one,” he said.

Wenzlaff stated while working with Flint Schools his main priority was providing children with the best possible education. He is encouraged by the number of candidates showing interest in serving the Flint Community Schools as board members.

“The key to a board is the ability to work together cohesively with administration,” Wenzlaff said.

He also said getting parents involved in crucial.

Wenzlaff regularly reads newspapers. So, he attended the event at Dr. Martin Luther King Jr. Peace Garden to place faces with candidates’ names and to meet candidates personally. He was happy with the easy access to the location, which was on the bus route.

“People can make better decisions when they see and hear the candidates and get a flavor for who they are and what they stand for.”

Group members hope to hold more events welcoming the community to meet candidates in local elections at the garden.

It’s all right to bus kids to other places,” she said. “But when you’ve got stuff in your neighborhood, you’re going to appreciate it and take care of it more.”

Charles Tutt, president of King Avenue PLUS, felt the event went well, too.

He noted the group hosted a Stop the Violence Rally at the garden last year, and library staff members or volunteers came to read to children there. Community members have also been able to learn to play drums there.

Tutt would like to get local churches more involved in events at Dr. Martin Luther King Peace Garden to grow the garden as a hub for the neighborhood with their help.

He said it was always a homecoming to come back to the neighborhood.