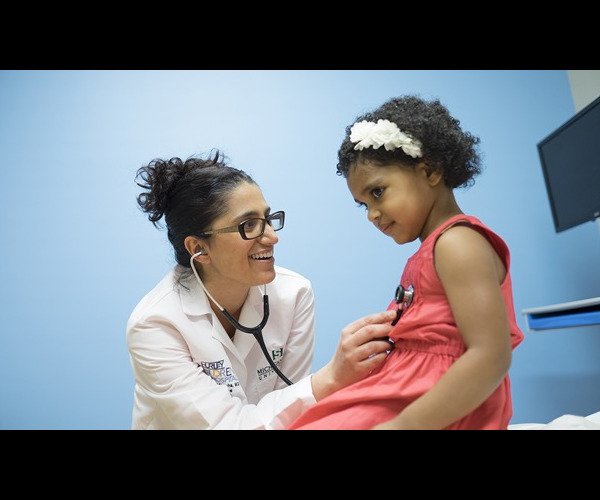 Dr. Mona Hanna-Attisha; pediatrician with Michigan State University and Hurley Children’s Hospital, whose research exposed the Flint water crisis, went back to work on May 20 after battling coronavirus. Hanna-Attisha is married and has two daughters-ages 11 and 14.

“I’ve been thinking about this a lot,” Hanna-Attisha said. “My new response when people ask me how I got COVID-19 is to really take a step back and say I got it because of federal incompetence. That’s how I contracted it. It’s because our national leadership failed and created this crisis. That’s why we have almost 100,000 people dead in this county.”

In addition, Hanna-Attisha said her husband works in Detroit as a pediatrician, which has had a lot of cases and she works in healthcare.

“But I think, though I’m not certain, that I got it while I was in New York City,” Hanna-Attisha said.

She was in New York City for a water advocacy event in early March before there were restrictions in place to prevent the spread of the deadly virus.

“Nobody understood the scale of the crisis. Nobody really knew New York was the epicenter of this global pandemic.”

Hanna-Attisha initially had the symptoms people commonly associate with COVID-19 including fever, headaches, body aches, fatigue and sore throat. Then, she started to have a deep, hacking cough. She also had some difficulty breathing.

“What tipped me off to the possibility of having this infection is I quickly lost my senses of smell and taste. That has never happened to me with any other type of cold or virus I’ve had.”

At first, Hanna-Attisha thought it was her cooking. Then, her husband pointed out the fact their cat was having accidents all over the place. Hanna-Attisha realized she didn’t smell anything. She knew that was one of the symptoms of coronavirus.

She used Tylenol and Motrin and drank additional fluids. This, she said, is known in medicine as supportive care.

Hanna-Attisha was tested for COVID-19 over a week after her symptoms appeared. It took eight days to get the results back.

“There were two reasons I wanted to get tested. One was because I wanted to go back to work. I wanted to be at the side of so many of my colleagues who were working during this crisis. I knew I needed to be safe and healthy before I could see patients. The second reason I got tested was because I suspected I was positive, and I wanted to donate my plasma to help others who were a lot sicker than me.”

Hanna-Attisha had a nasal swab test at a drive-thru Red Cross testing site in Dearborn. She said having the test was uncomfortable in her case because the swab was stuck far up her nose in order to get a good sample.

While waiting for her test results, Hanna-Attisha experienced anxiety and worry, as well as guilt because she felt she may have infected other people, including co-workers, patients and family.

“My husband has really bad asthma. I was worried about that. I felt guilty that maybe I put him and my kids at risk.”

Hanna-Attisha finally got her test results via text message. She said she felt “validation” because she was already pretty certain she had coronavirus.

The symptoms of fever, ache and fatigue went away after about a week. The deep, hacking cough lingered for over a month. During this time, Hanna Attisha said she self isolated.

Her husband slept in a different room. They used separate bathrooms, and Hanna-Attisha stayed away from her children. Hanna-Attisha describes herself as a social person who likes to hug and tuck her kids in at night, which made the quarantine process even more difficult. Not being able to be close to her kids was the hardest part for Hanna-Attisha.

Hanna-Attisha did not need to be hospitalized. She did not get convalescent plasma treatment nor take remdesivir.

“I was lucky. I’m a doctor, and my husband is a doctor. I was fortunate to have the resources to care for myself.”

Hanna-Attisha signed up to donate her plasma to others with COVID-19. She describes the process as very long. Through the American Red Cross, she had to first test positive, and then have no symptoms for two weeks. Then, she had to get tested again and test negative. She had a retest through Hurley Medical Center at Kettering’s Atwood Stadium, which came back negative after one day. She continued to be cautious, and she and her husband continued sleeping in separate rooms. Within two weeks she had an appointment to make a donation at a center in Bloomfield Hills. She said that center had a very fast machine and an appointment time that worked for her, but she suggests anyone who has tested positive for COVID-19 in the past who is now negative donate at any American Red Cross Center after signing up online or on the phone. She said this is a time of isolation when everyone should try to realize how important it is to care for each other.

Hanna-Attisha said she just got her lost sense of smell back.

“It’s been seven weeks that I haven’t been able to smell or taste!”

She feels lucky her case wasn’t as bad as others she knows of, as well as grateful she was able to help other people by donating her plasma.

She also said she was extremely excited to be able to recently get dressed for work and see the children there.

Still, Hanna-Attisha remains outspoken about the role of government in this crisis.

“This is a horrific natural disaster. Just in Michigan, over 5,000 people have died. It didn’t have to be that way. We didn’t have to be so unprepared. We didn’t have to be so behind the eight ball. Our federal government absolutely failed us. There’s a lot we could have done. We have examples all over the world of other countries who handled this beautifully. They were proactive. They first and foremost valued the health of their citizens. There is a lot of accountability that needs to happen, and people’s lives were lost.”

Michigan Department of Corrections completes testing of every prisoner in system