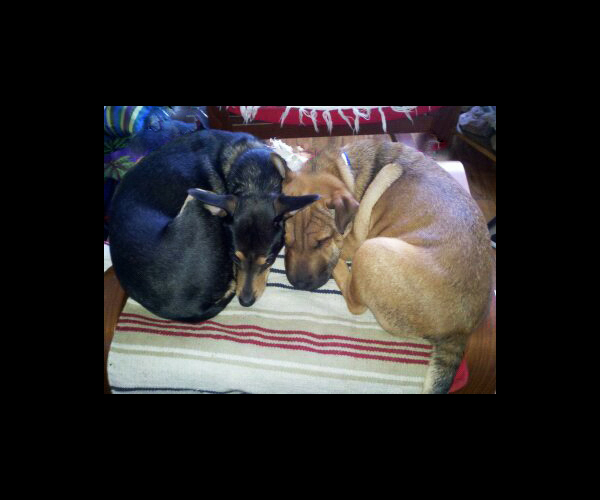 Featured photo (l to r):  Dancer and Lino sleeping on a footstool, both of whom were affected by the leaded water in Flint.

I already understood the long term ill effect of lead poisoning when we found out Flint’s water was toxic.  For an unrelated reason, I had previously suffered a long illness from heavy metal poisoning.  Your health never fully recovers.  My heart aches for the Flint people who have been affected for the rest of their lives due to mismanagement by our former governor, Rick Snyder, and his appointed “Flint Emergency Manager” Darnell Earley.

I cannot take a risk of being poisoned again, so I do not drink the Flint city water to this day, and my pets don’t either.

On April 25, 2014, I did not know that I had begun poisoning my beloved pets.  This is the day the Flint River water was sent through our water pipes without the chemical corrosion inhibitors that prohibit the leaching of lead pipes into the water supply.  This was a conscious decision on the part of the city overseers.

At this time I rented from my friend on Welch Blvd; between us we had five dogs and cats.  Our assumption was that a little e-coli would not affect our dogs because they eat disgusting things normally. (They really do.)

There were a significant number of “boil water” notices shortly after.  The problem with this was that we always heard about it after the fact, which meant we were drinking what we thought was e-coli water.  (I later found out there was TTHM toxicity in the water at the time as well.**)

By summer 2014, we already did not trust the authorities about our water and purchased a water cooler with purified water.  Our early distrust saved us from getting lead poisoning or legionella.

Slowly, as the months went on, we noticed the pets were all acting old, prematurely greying, had achy joints and were becoming lethargic.  My dog Lino, only 4 years old, had been epileptic and under control with medication.  His hair was also going grey, and he began to have seizures again.  Initially a brain tumor was suspected. One day he had a horrific seizure that literally killed him before I could get him to the vet.

I also lost my cat, Magic Kitty, at this time, who became sick and had to be euthanized.  Our vets could not figure out what was happening.

On September 25, 2015, Flint was officially notified that our water had been poisoned by lead for the past 17 months.  We immediately changed our pets over to bottled water.  Within about two months the remaining pets started slowly bouncing back. We did not know to test for lead when Lino began having seizures and died, but my vet said it was most likely the cause of his horrific death. (We were unable to prove it by then, of course).

Three of the other dogs developed bizarre cancers rarely seen in dogs within the following year.  The fifth dog became senile rapidly and had neurological damage.  That is five dogs who all suffered permanent damage from lead poisoning.

If this was the effect on pets, imagine what happened to people, growing children, even the soil we watered in the summer; all contaminated with the neurotoxin lead.

I moved in 2017 into a house with a new reverse osmosis system. This is an ideal setup until you need filters or the bladder in the holding tank goes bad.  Filters are expensive and no longer carried by stores in Flint. We are struggling now to figure out how to reset the bladder in the holding tank, and if it won’t work I will have to buy a new tank. The tank holds only one gallon. So if you are cooking or have guests, bottled water is still needed for backup. I am back to exclusively purified bottled water until I can resolve and pay for all of this.

We also have a filter on our shower head.  I will always use purified water for consumption at my house, for myself and my loved ones, with either two or four legs, for as long as I live in Flint.

Emotionally, I cannot believe that our water is okay.  As I understand it, not all lead pipes were replaced as permission was not obtained from all the home owners, although our water is now treated for pipe corrosion in the proper way.  Flint residents were lied to for 18 months- repeatedly, deliberately-and I just can’t feel any trust.

Every one of the people who poisoned my city has been declared innocent, and we also got to pay everyone’s legal bills with our tax dollars.  One of the long lasting effects this crisis has had on me is a lot of anger and a deep distrust of politicians.

To review the history of the Flint Water Crisis, the most complete and accurate web page I have found is at https://www.nrdc.org/stories/flint-water-crisis-everything-you-need-know#sec-whyis

* Because of Flint’s method of treating Flint River water, it experienced problems with elevated trihalomethanes. The higher levels of chlorine, while reducing coliform counts, led to the formation of more trihalomethanes.

** Trihalomethanes (THM) are a group of four chemicals that are formed when chlorine or other disinfectants used to control microbial contaminants in drinking water react with naturally occurring organic and inorganic matter in water.  The EPA has published the Stage 1 Disinfectants and Disinfection Byproducts Rule to regulate total trihalomethanes (TTHM) at a maximum allowable annual average level of 80 parts per billion.  These are all by-products of chlorination. They are Cancer Group B carcinogens (shown to cause cancer in laboratory animals) over 80 parts per billion.