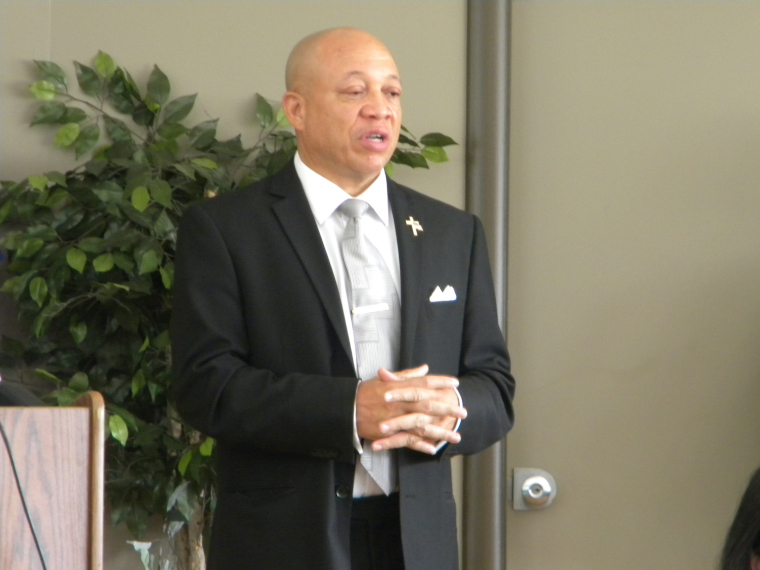 We’re at the intersection of crisis, according to Mayor Sheldon Neeley. Not only are we in the middle of a pandemic and in a time of social unrest, but throughout the nation and citywide there has been an uptick in crime.

As of July 12, Flint’s homicides were up 12.5% and violent crime had increased 17% compared to the same time in 2019, according to statistics available on the city’s website.

Neeley said this could be due to the city lockup being closed and the fact the Genesee County Jail is now at 80% capacity level because of the pandemic.

“I live deep within the community,” Neeley said. “I have witnessed some shootings even on the block that my family lives.”

But, Neeley said we can do “better than our best” with God.

Neeley said crime will no longer be tolerated in Flint and residents would no longer be perceived as victims of criminals.

The mayor announced a three point plan to combat crime in the city. He said a special investigative unit would focus on illegal guns and tactical expertise. He said there would be a recruitment effort for officers to fill vacant position-many of which have been vacant for years. The city will also be launching a gun buyback and offering $50 for long guns and $100 for handguns. No questions will be asked during the buyback, and the dates and times will be announced at a later date.

Neeley said local, state, college campus police, the sheriff’s department, the ATF (Bureau of Alcohol, Tobacco, Firearms and Explosives), the FBI (Federal Bureau of Investigation) and other entities were designed to bring order where there is chaos.

“We have to support those individuals.”

The mayor thanked Mott Community College campus police for agreeing to patrol outside the parameters of the college campus. He also thanked the Michigan State Police and the Genesee County Sheriff’s Department.

Neeley said though the climate has changed since a police officer visited his kindergarten classroom years ago, there were “fine officers doing really good work.”

“Let’s not define them by the acts of some.”

Neeley said when officers were doing their job correctly, he and others would support them and stand firmly behind them, and he said he would repeat what he said.

“This administration will stand firmly behind law enforcement when they’re doing their job correctly.”

Neeley acknowledged he understood there would be some who would criticize this or object to this.

“We’re going to be hiring new officers. We have raised the level of pay for new officers coming in.”

Flint Police Chief Phil Hart said a new special investigative unit will target areas of Flint where violent crimes are most concentrated in an effort to take illegal guns off city streets. Specialized training will be provided to officers to get weapons out the hands of those with ill intent, according to Hart. Hart said the department was interested in recruiting those with a vested interest in improving the community. There are currently 14 vacant positions that need to be filled within the Flint Police Department.

Local pastors expressed their support for the city’s plans to reduce crime. Neeley said he hoped clergy members would assist in the city’s efforts

Pastor Jeffrey Hawkins of Prince of Peace Missionary Baptist Church lost two of his own children to gun violence and is over the Flint Advisory Council to the police department. He was able to comfort the mother at a homicide scene on July 20. He said he was encouraged by the meeting on July 21.

“No child should have to look at their child on the pavement covered up as a homicide victim, then have the gruesome task of having to make burial arrangements,” Hawkins said.

Bishop Roger L. Jones Sr. of Greater Holy Temple Church of God in Christ also said he lost two nephews to gun violence and crime. He said he was pulled over by police and was afraid because of the climate. When asked to put his hands on the steering wheel he did.

Dr. Herbert Miller, pastor of Metropolitan Baptist Church, told those at the press conference there was a time to put politics aside to make sure lives were not lost.

“Neighborhoods are being terrorized,” he said. “People are afraid in their own homes.”

Miller said people should be able to be in their own community without feeling their lives are at risk.

“We want you to know that we support (police) reform,” Miller said. “But, we also support that people should be able to live in their houses safely and not be in fear.”

Miller expressed that he hoped the new task force would help the city move in the right direction to decrease crime and make the city of Flint a better place to live and work.

Alfred Harris Sr., pastor of Saints of God Church, said it is important to be proactive and not reactive. He said clergy needs to do more than pray, but should talk to young people, try to figure out what is going on and try to come up with ways to remedy the current situation on all levels.

Anyone interested in working for the Flint Police Department can apply at cityofflint.com under the jobs tab.

3 tips to adopting new technology in the workplace and beyond

Fauci warns of ‘surge upon a surge’

Joe Biden fractures foot while playing with his dog, Major