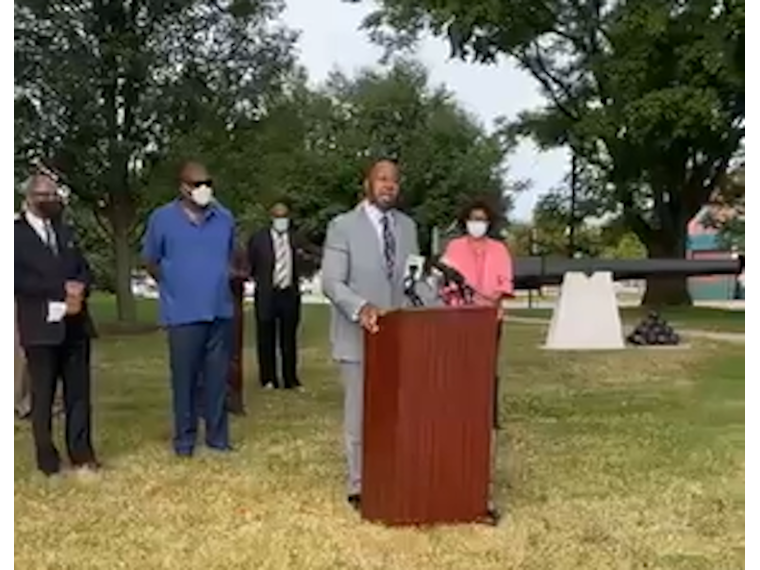 Photo: Pastor Chris Martin gathered along with other pastors and community leaders on the front lawn of the Genesee County Court House to voice support for the Flint City Clerk’s office.

A group of community leaders gathered on August 25 to “send a message of unity and a message of togetherness” after Genesee County Election Supervisor Doreen Fulcher wrote a letter to City Clerk Inez Brown pointing out the “failures” occurring among the Absentee Voter Counting Board (AVCB) during the August primary election.

Some Flint City Council members have suggested giving the city clerk extra assistance to prepare for the general election after counting absentee ballots for the August primary was delayed.

Election officers spent from 11 a.m.-4 p.m. on Election Day sorting and organizing envelopes so that they could discern where and why the counts were off, according to Fulcher.

Fulcher said her office was not advised of the “desperate” state of the AVCB and that results were received at 3:12 p.m. Wednesday August 5. Nineteen issues are raised in the letter.

“There have been no misgivings or malfeasance in the city clerk’s office in the city of Flint,” said Pastor Chris Martin of the  Flint Unity Coalition of Pastors.

He said Inez Brown has served as Flint city clerk for a number of years and has been a woman above reproach. He also referred to the letter as “bullying” and “slandering.”

“In 2020 we are faced with a serious pandemic and most people are trying to figure out whether it is safe vote in person or by absentee mail,” Martin said.

He said the primary election for the city of Flint was done with a huge number of absentee ballots being placed because to COVID-19.

“As we prepare for one of the most important and critical general elections in the history of this county, we don’t want interference from any entity, any person or any municipality into the efficiency of the elections of the city of Flint.”

Martin said those in the Flint community need to work together.

“We 100% support Inez and her staff,” said Pastor Al Harris.

Harris said anybody with common sense knows when you have an election something goes wrong. He asked Fulcher publicly whether she wrote outlines to all the other precincts in Genesee County outside of Flint

“We are not ignorant of satan’s devices,” Martin said “It’s a crying shame that the bullying; the rebuking of Ms. Brown, is done by people who do not look like the people standing here today.”

He said, agreeing with Harris, you cannot pick on one municipality and let the other municipalities go without saying a word.

The American Civil Liberties Union took the Flint City Clerk’s Office to court, alleging the clerk’s office was failing to process thousands of absentee ballot requests rapidly enough to allow voters to take part in the August primary. Brown was ordered clear the backlog before the primary.

During the Flint City Council meeting August 24, Brown said she plans to increase training for election workers, double the number of staffers counting absentee ballots and open up her office to voters for more hours in the fall.

The Michigan Board of Canvassers voted to require the Secretary of State to exercise supervisory control over November’s election in Detroit because of multiple problems tabulating votes in the August primary there.

On 100th anniversary of Women’s Equality Day, governor announces transfer of the MWC to LEO

Democrats Agree To Cut Weekly Unemployment Benefits From $400 To $300