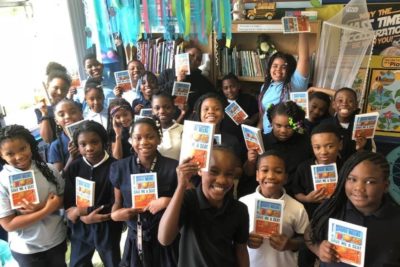 It was not shocking for her school to rank 33 in the state among over 2,000 elementary and middle schools by the Mackinac Center for Public Policy for Latricia Brown, school leader at Flint’s Northridge Academy. After all, the school was recognized by the Michigan Department of Education as a Michigan Reward School in 2013, 2014 and 2015. To Brown, success should not come as a surprise-as failure should not.

“If you have strategies and procedures in place that are followed with fidelity and both school-wide routine and classroom routine that will give you an outcome of success,” Brown said.

There are four pillars a charter school must meet within its contract: fiscal management, academics, board and governance and operations of the school.

“The academic piece is just piece of all of the four targets we have to meet. If we miss the mark in academics, that could cause us to close. If we do well in academics, but fiscally we’re not sound, we still could close..You have to succeed in each one of the pillars,” Brown said.

Students at Northridge are tutored daily based on their level of ability. Students also have 90 minutes of uninterrupted reading time. There are varying grade levels and ages in each class for reading, enabling students to be challenged but to not struggle unnecessarily.

The state of Michigan looks at a number of factors when scoring schools, including the growth of individual kids, the proficiency level of each kid, attendance, how well students who speak English as a second language are doing, whether the school has a functioning library and gymnasium, according to Renea Rubin-Shelton of Northridge.

As a charter school, Northridge Academy also takes part in a quarterly benchmark assessment, or NWEA (Northwest Evaluation Association), which gives the lexile scores for each student, indicating areas in which each student is weak or strong. Northridge scored the second highest of all the Ferris State University schools, with Ferris State being Northridge’s authorizer. All charter schools must have the authorization of a college or university, and Ferris State has a conglomerate of schools across the state.

Northridge Academy features a state-of-the-art computer lab with about 30 Lenovo desktops up-to-date with Microsoft 10-enough for a whole class.

“On top of that, we do have Chromebooks each of our students are able to use on Chromebook carts. We do have some laptops, and our Chromebooks are probably one-to-one. We have 206 students, and each student has their own Chromebook,” Brown said.

Students at Northridge can take part in afterschool sports, including volleyball, flag football, cheerleading, junior and varsity basketball and girls’ basketball. Track will be available in the spring. The school getting ready to incorporate what they call the “Itty Bitty” basketball team for first grade to third grade girls and boys.

Coach Tishumbe Franklin said the students are in-tuned, positive, willing to learn and try their hardest in sports at Northridge.

In regards to science and exploration, Jessica Reed, kindergarten teacher, said everything is hands-on.

“Kids can’t learn science unless their exploring through their hands, using discovery through engineering tools such as blocks, cubes and building contractions. We use Generation Genius and Mystery Science for our curriculum. We also bring in outside tools. We use STEAM: science, technology, engineering, arts and music to incorporate different skills for science,” Reed said.

Sloan Museum comes in and works with the older grades to do science activities. There is an exploration based method followed for each content objective. Kids make things, tests hypotheses, do research, read articles and see if their hypothesis was correct following the scientific method, Lisa Casteel, a middle school science and English language art teacher.

In character education at Northridge, students learn about becoming a productive member of society, being polite, being inclusive of other people, apologizing, preventing fights and respecting neighbors.

In the fall, Brown plans to add Becoming a Master Student into the students’ schedule to help students become more organized and equipped for achievement.

“Northridge is not well suited for parents who do not have a belief that their student can do anything. I don’t care if a kid is a special ed student or slow to learn, if the kid is entrusted to us, we’re going to make a diamond out of the rough,” Brown said.

The Mackinaw Center for public policy takes into account the context of a school, controlling for differences in the socioeconomic status of students each school serves. Controlling for these differences provides a more accurate assessment of a school’s performance, according to the nonprofit research and educational institute’s website.

Charter schools are public. They do not receive any financial help traditional public schools do not receive. Brown said she is not in competition with any other school because she said it is all about what is best for the students.

For details, visit NorthridgeFlint.com, or go to Northridge directly at 4100 Coldwater Road.