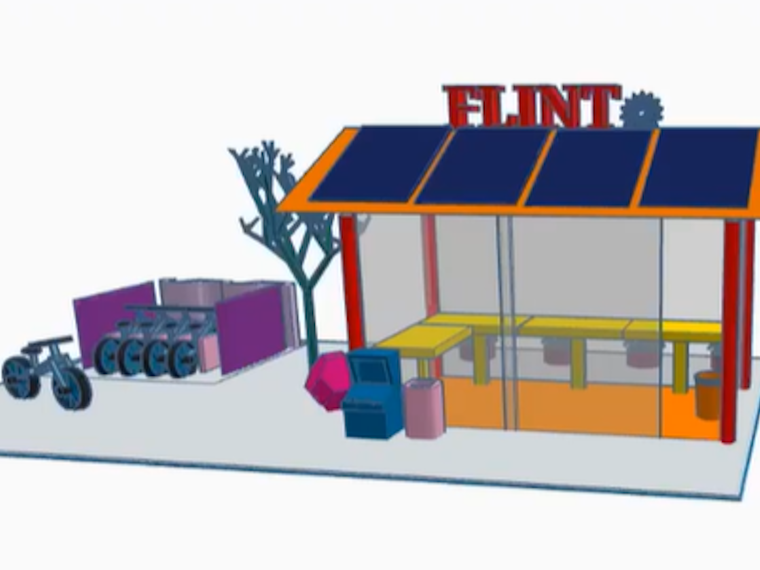 Photo: A model of a possible solution to help solve the transportation crisis in Flint, presented at a recent youth forum by a team of young people from New Jersey

Flint residents and many who support the community came together for a recent virtual event that encouraged young people to think outside the box and develop solutions for many environmental problems plaguing local neighborhoods.

“It’s the marginalized communities that get hit the hardest with environmental issues,” Harper added.

Syrah Scott founder of the National Clean Water Collective, based in New York, discussed how she started Pen Pals.

“When I woke up and went to bed, they kept talking about the Flint Water Crisis” Scott said. “I said ‘OK God, is that what you want me to focus on?’ Long story short, our first event, we were able to get 10,000 bottles of bottled water to Flint, wipes, hand sanitizer, Pampers and even shoes. We did that event on (Flint) City Hall. Since then, we’ve put on maybe 21 events in Flint.”

National Clean Water Collective strives to look towards sustainable solutions, according to Scott.

Scott helped create a forum intended for youth to not only use their voices, but also to make an impact on the community. The first Pen Pals forum was held at the Haskell Community Center.

Mayor Sheldon Neeley spoke to the youth during the forum. He thanked them for their participation and said there are tremendous challenges regarding air quality, water quality and the environment overall in Flint and throughout the country.

Anshbir Soin of Edison, New Jersey, who aspires to become a pediatrician, acted as lead panelist for the transportation coalition, which was voted as the winning team.

“Our crisis; inadequate access to transportation, centers around the issue that many citizens in Flint are unable to traverse the city in a timely, efficient manner because of economic crisis and social inequality,” Soin said.

He said the transportation crisis affects senior citizens, the impoverished and disabled individuals to a greater extent.

“Our solution is aimed to create jobs, increase safety and create comfort for citizens of Flint,” Soin said.

The group’s first solution was creating rental bike stations to be placed at 10 locations throughout the city.

Pranav Thota; another transportation coalition member, said the group also hoped to create bike lanes, funded with profits from the rental bikes. He said they hoped to reach out to the Crim Race to form a partnership for additional funding.

Thota said they would work to paint street murals near the bike lanes as studies have shown this reduces speeding by cars creating a much safer environment for bike riders.

Bus shelters with solar panels to provide electricity for the shelter and supplement nearby places with clean, renewable energy would be delicately placed throughout the city to accommodate for safety and leisure during hazardous weather, according to the group’s plan. The bus shelters would be commercially utilized through advertisement to generate revenue, according to group member; Pal Patel.

Two transportation team members: Ayush Gupta and Armman Jhamb, also developed a mobile app through which Flint residents would be easily able to buy bus tickets, view bus schedules and view live locations of buses on an interactive map. The team is seeking a partnership with MTA and said they will not let Flint down.

“While plastic water bottles are greatly appreciated within our community, they permit toxins into the water that contaminate it,” said Ruby Wilson, a member of the water coalition.

“The hard plastic is also a harm to the environment,” Wilson added.

“Growing up I would always hear of Flint as ‘boomtown’ from my family members,” Sweeney said. “I’m ready to take that same energy but with a new way of innovation for the next generation. The service would include various things around water treatment, such as water testing services, reporting and educational awareness about water pollution all dawned from your smartphone-also to mention the economic growth for the city of Flint by hiring local residents to get the job done.”

The fee for the service, Sweeney said, would be $25.

Turtle Plastics; event sponsor, donated $2,500 for stipends to the youth, T-shirts, an award and other parting gifts. The company has supported the Flint community with over $20,000 in support.

The winning team also received the opportunity to work with 100K Ideas. According to the organization’s website, 100K Ideas is a Flint-based nonprofit “where big thinkers are ushered from napkin-sketch to market.”

In addition, the event’s moderator said the winning team would have an interview with the Soulful Seeds and Brown Girl Green podcasts. All lead panelists received a $100 stipend, courtesy of Turtle Plastics, and all team members received a $50 stipend, as well as parting gifts from the National Clean Water Collective.