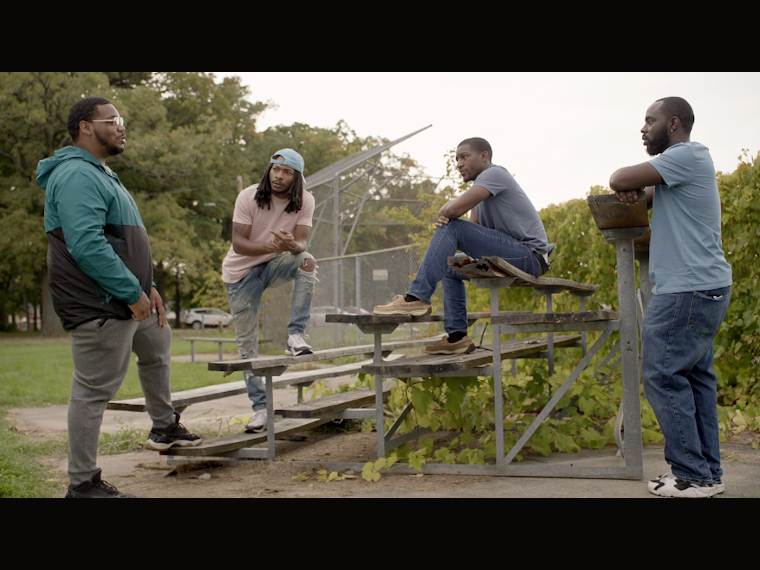 The Flint Courier News talked to the local millennial participants about why it was so important for them to speak to the nation about the importance of voting within the Black community.

George McQueen, 29, is an assembly line operator and said a lot of the views expressed on their ads were based on the participants’ actual opinions. He describes the conversations as “really organic.”

“It wasn’t that we had a script or anything,” he said. “I appreciate the fact that nobody tried to influence what we said. We weren’t acting the whole time. Towards the end was the only part when we had a script and that was because they gave us a couple options of things to say. They were basically just words of encouragement to help them get out there and vote.”

McQueen said he agreed with everything he said in the ad. One of the phrases he said he choose to say was: ‘Every vote counts. So, go vote now.”

One participant repeats a view some share in an ad: “How do you expect us to vote? We’ve got bigger problems.”

“I’ve definitely heard that view shared before,” McQueen said. “In those kind of situations, I always ask if you aren’t voting that means you’re OK with whatever the outcome is. Then, when they get into I want this person to win over that person, I kinda chime back in like: ‘That’s why you need to vote.  We can’t just will people into office. You have to vote for them.”’

McQueen has been in Flint his entire life. He said some of the biggest problems in Flint are the violence and crime overall.

“I just feel like there’s not just one thing that will solve it for everybody. But, I do feel if there was more money to go around here, people would be less violent. If there were more job opportunities, more ways for people to live comfortably, I feel a lot of the stress would be lessened and there would be a lot less violence.”

McQueen said the best way to get people to vote to explain to them the outcome is not already decided.

“You have to try. It’s not like anything is going to happen if you don’t put some kind of effort forward. Voting is their voice. They have to at least try to get who they want to represent them.”

Aaron Neeley, 28, who is a data collector and the nephew of Mayor Sheldon Neeley, also spoke on the ads. Aaron Neeley has lived in Flint 25 years.  He lived in Ohio three years.

“I got to see the differences between my city and a city that’s not predominantly Black,” he said.

In Aaron Neeley’s eyes, lack of trust in each other is an issue in Flint.

“It’s because of our demographics-not only speaking towards our water crisis but (it’s) our poverty situation that we deal with here (and) our lack of access to education” Neeley said.

He said there are a lot of smart people in Flint, but he believes many, for many who may want to take additional classes as he does, finances are an obstacle to doing this. He also said there are not enough schools in the city, particularly high schools.

Neeley said when Obama was president Blacks had hope and that in his opinion the churches have been more of a beacon during the COVID-19 pandemic than government.

“I think if we have people who realize that there are borders that need to be crossed, there are issues that are not being met by some of our minorities….When you have someone who wants to make a change and wants to kind of speak to the elephant in the room, then that kind of creates a conversation for not only the people who want to speak up and have their voices heard, but the  people who can make a change and make a difference and sign those amendments and do what needs to actually be done to get processes changed.”

Besides being part of a podcast, volunteering in the community and working with Michigan State University trying to navigate resources for those who have been affected by the Flint Water Crisis, Neeley said he encourages people to vote. For example, he talked to youth about the fact they will be voters soon and can make a difference while he was coaching basketball.

On September 22, Senator Kamala Harris traveled to Flint to empower Black voters to cast their ballots early. Harris toured downtown and stopped by three Black-owned small businesses in the area. Deanna Nolan, Flint-native and former WNBA basketball player, joined the walking tour to share her experience growing up in Flint and spoke to how Black-owned small businesses make up the backbone of communities in Flint. On the walking tour, they met the owners of MagnifiClips, Comma Bookstore and Bedrock Apparel and heard from them on their experiences weathering the pandemic as business owners.

Citywide celebration being planned for NBA champions from Flint