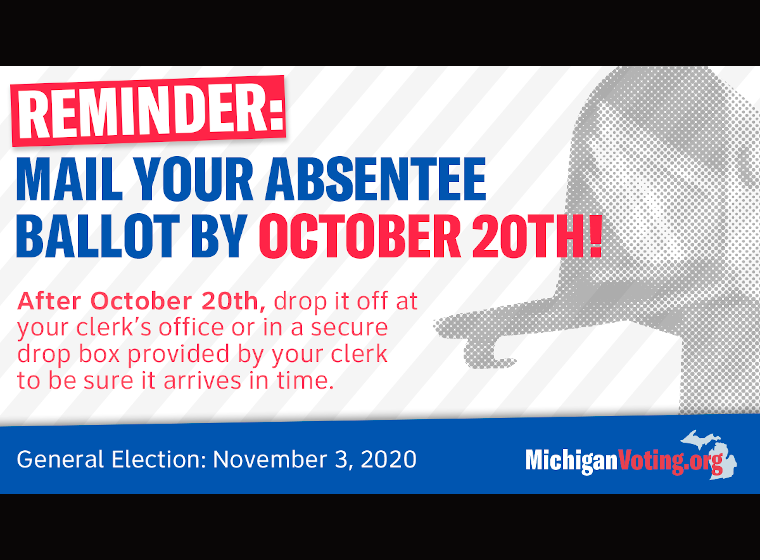 The ACLU of Michigan recently notified over 30,000 voters whose absentee ballots were rejected in Michigan of this matter. These voters were not notified by the clerk’s office although the Michigan Department of State tracks all aspects of voter registration and voting in their database.

Since the passage of Proposal 3, every registered voter has had the right to vote by absentee ballot, and the ACLU of Michigan has been tracking the rejections and doing work to ensure voters are educated on what steps they need to take to avoid problems.

“We sent a letter to voters who had a ballot rejected between November 2018 and August of 2020 for two different reasons-either their ballot was received late (after 8 p.m. on Election Day) or there was some issue with their signature,” said Sharon Dolente, voting rights strategist for the ACLU of Michigan.

According to Dolente, the purpose of sending voters the letters was to let them know this problem had happened in the past and to enable them to ensure it didn’t happen in the future.

“I think particularly around mail, when I grew up, mail took a day or two,” Dolente said. “So, I suspect there are voters older and younger than me and my same age who have that perception as well. They unknowingly have their ballots arriving after the deadline. If they’re never notified, they have no way of knowing they need to mail it sooner.”

Dolente said the reason for the large number of absentee votes being rejected can be attributed to the fact the process is new for many people, although not necessarily difficult.

“I also think we saw in the course of this year-especially in August-a significant series of attacks on our postal service. Some of those were attacks by the Trump administration. Some of them were attacks by the pandemic, meaning the strain that the pandemic was having on the postal service. So, there was a significant increase in the number of ballots that were late in August.”

“We have not gotten any returned, rejected or not at this address letters back. We have been getting a number of calls on our Election Protection Hotline, which is a great resource, not just for these voters, but for any voter that has a question or an issue related to voting and registration. Those voters who have gotten the letter have been calling. Then, we can give them the information on exactly which election it was in that they had a ballot rejected and exactly the reason.”

Senate Bill 757 became effective on Oct. 6, 2020. The bill signed into law requires local election officials, which are city and township clerks, to contact a voter if they have a signature issue that is going to cause their ballot to be rejected. This includes voters who forget to sign their ballots and those whose signatures do not match the signature the clerk had on file. Notification of one of these issues is required to be given within 48 hours.

“If you have a ballot that’s late; that doesn’t arrive by the deadline, by nature the clerks can’t call you to solve that problem because it’s coming after the deadline. There hasn’t been a practice of notifying the voters so that doesn’t happen in a future election.”

Other reasons ballots may not be counted include someone passing away or when voters move and re-registers at a new address after the time they applied for or submitted their absentee ballot.

The ACLU has been strongly encouraging that clerks be legally required when they have their ballots required for any reason.

Over time, age or medical conditions have been known to affect signatures. Dolente suggests if a person’s signature changes over time, they be mindful of the fact if they go into the Secretary of State to sign anything their signature is updated. Another option is to fill out a new voter registration form and put a new signature on there.

The newly signed bill gives local clerks one day to begin pre-processing. Dolente said this is a small step and over time hopes more will be done to count the significant number of absentee ballots Michigan voters are now choosing to use.

The ACLU, along with the League of Women Voters, filed a lawsuit earlier this year to ensure when voters complete their ballots and put them in the mail that they are not penalized for the time it takes the postal service. They were unsuccessful in winning their argument that having ballots be required to arrive by 8 p.m. Election Day was overruled by the passage of Proposal 3. There are current cases challenging this in light of the pandemic and Proposal 3. These cases are still pending in both state and federal court.

Colleen Vlachos of Farmington Hills, Michigan received a letter Oct. 9 from the ACLU letting her know her ballot had been rejected from the August primary. Her ballot, which was mailed July 21, was not received on time. She said she was “severely disappointed” at the fact her vote wasn’t counted, as well as nervous for the upcoming election. Vlachos said there are a lot of resources for voter education, such as the Nonpartisan Election Protection Hotline, but she doesn’t know whether everyone is aware of them.

“My personal advice to voters would be to vote as early as you possibly can,” she said.” I think it’s important that everyone’s vote counts in every single election, not just necessarily this one. Personally, I’m a nurse. So, I am especially in tune to the pandemic, and I am looking forward to potentially some changes there.”

The Nonpartisan Election Protection Hotline can be reached at 866-OUR-VOTE, seven days a week, to report a problem or for general elections/voting questions.