Mark Taylor, a senior firefighter with the Detroit Fire Department, spent the year recovering from a horrific and devastating fire in 2019. After checking for people inside a vacant burning building, the roof collapsed. Taylor suffered burns on more than 60% of his body. He recently rejoined the Detroit Fire Department in October 2020, following his extensive recovery. This all came just one year after his wife’s battle with cancer, from which she’s now in remission.

“Mark, Megan and their four children are the definition of selflessness, bravery and perseverance,” said Johnathan Schottenstein, president of VCF.

“They are a family that no matter what comes their way,” Schottenstein added. “They don’t let life get them down. They give back to their community without blinking an eye, no matter what they’re going through. (And) because of that, when I heard their story, we decided we wanted to give back to them in a big way. It was an honor to celebrate the Taylors through this fun experience, especially during a year when times have been challenging for us all. They are the true MVPs (most valuable players).”

At the close of the ‘gate, Value City Furniture awarded Mark with an MVP trophy plus an exclusive VCF Designer Looks ComforTECH Echo Dual-Power Recliner featuring adjustable head and foot rests, built-in Bluetooth speakers, hidden storage cupholders, wireless chargers and more. Echo is one of the highest tech furnishings to ever be offered through VCF Designer Looks and will be released to the general public in December.

The furniture retailer also presented a check for $8,000 to help the family with outstanding
bills.

“I will never forget this moment,” said Alejandro Alvarez Correa, VCF chief marketing officer who presented the Taylors with their prizes at the ‘Homegate.’

“At the heart of Value City Furniture is a desire to help our community celebrate great moments like this together, especially with a family like the Taylors who have survived so much the past two years,” Correa added. “In spite of everything they’ve faced, from cancer to Mark’s recovery during COVID-19, they still hold so much joy and love in their hearts. That’s what matters. These are the moments they’ll never forget. They’re an inspiration to us all.”

This year, Value City Furniture has planted its roots deep into their Michigan communities. The brand
launched its new-concept VCF Designer Looks stores with six new locations opening across the state in 2020. Those openings led to more than 225 new jobs statewide.

Earlier, in April during one of the first COVID-19 surges, VCF also donated furniture to the Novi Suburban Collection Showplace Field Hospital break rooms including comfortable recliners, tables and chairs that healthcare workers of the field hospital could use for much-needed breaks. 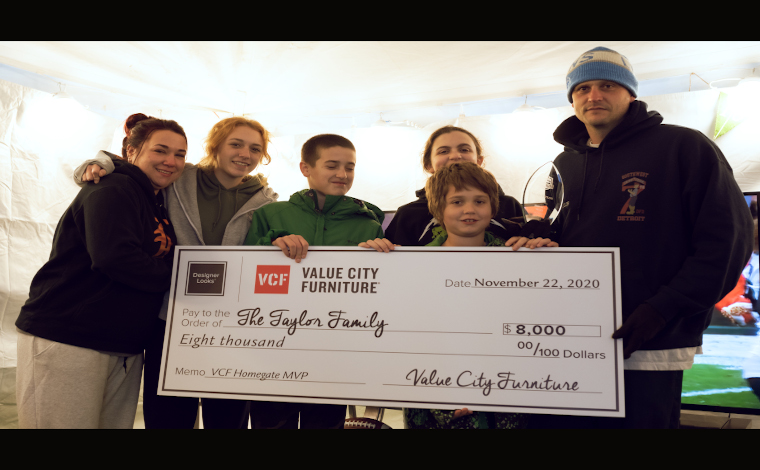