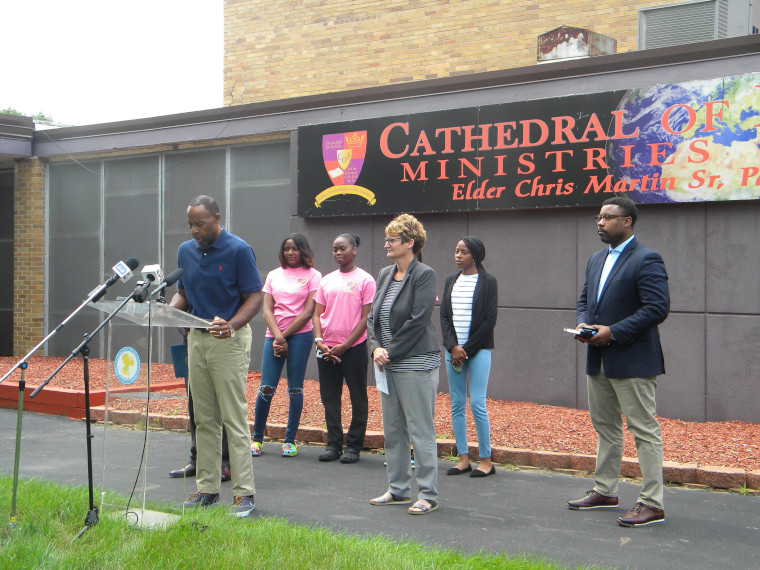 These are times and situations where we need to make sure that the city of Flint understands there are so many wonderful things going on in our city, according to Pastor Chris Martin. Martin was part of a group that recently announced one of these things.

“Today it gives me great pleasure to announce that our mayor, Mayor Sheldon Neeley, and the city of Flint, along with local pastors, as well as the Urgent Relief Fund of the Community Foundation of Greater Flint, will kick off the Super Summer Fun Camp for the month of August,” Martin said.

The reason why the camp is so important, according to Martin, is it is part the mayor’s executive orders to combat crime. The city of Flint partnered with Cathedral of Faith Church, as well as the Mount Carmel Baptist Church and the Urgent Relief Fund of the Community Foundation of Greater Flint-which is made up of “fund champions” such as the Charles Stewart Mott Foundation, Ruth Mott Foundation and the United Way of Genesee County to offer a comprehensive camp.

The camp will be available for ages 6-16 and will be held at Cathedral of Faith Church and Mt. Carmel Baptist Church. Campers will have the ability to have two meals a day, as well as the opportunity to participate in athletic enrichment and recreational activities. In addition, they will have access to mentorship and COVID-related stress release trauma activities.

“We’re trying to make sure that we get back in the habit of providing wonderful services for our young people so that they will not have to be aimlessly on our streets but to have something constructive to do,” Martin said.

Martin also said because of restrictions they also want to have in place, they will accommodate 100 campers. The camp has a history of having over 200 students. Having the two sites will allow for social distancing. 85% of the activities will be held outside. Hand-washing will also be practiced.

Swimming will be offered at least two times during the summer program.

Also, young adults and teenagers have been employed for the program. They will be able to go into the community and help fight blight as well.

“It would also help out with parents who are currently trying to work one or two jobs during the day to have an added eye of support and protection for their children while they go to work.”

This is one of many programs the city’s executive order will be supporting and support will come directly out of city of Flint Treasury Department.

“Though we facing many crisises in our society and in our community, this worldwide uptick in violence and crime, we saw fit to be able to declare an emergency,” said Mayor Sheldon Neeley. “When we have an emergency (and) we have partners like Pastor Chris Martin, Cathedral of Faith, United Way, Community Foundation, other philanthropic arms, we’re there to come and support them.”

According to Neeley, young people would be working with younger people.

“This is going to be the pre portioning of the gun violence emergency that has been declared,” Neeley added.

In the camp, young people will engage in sporting activities.

“As a young athlete I learned to be humble in my victories and how not to lose my dignity in my defeats,” Neeley said.

“That is a de–escalation tactic,” Neeley added, pertaining to violent situations.

For the post part, he said there would be emergency response team be dispatched throughout the city. There will also be social workers, psychologists, medical professionals, clergy and community activists, as well as a child advocate, to make sure the cycle of violence does not continue.

Neeley said he was confident the program in Flint would be a template for the rest of the state of Michigan, as well as the country, on how to resolve these very serious issues.

“Gun violence does not just strike one person; it strikes all of us,” he continued.” It takes away the potential of a community. When we lose a life, we don’t know what that life could have supported in our community.”

Jenesis Dones, age 16, who will be a camp counselor, will help the children at camp build character development skills. She also wants to help them laugh.

“Over the years, it has been tough with not being able to have different social skills,” Dones said. “We’re just here to help them build them up and to make sure going home that they take those same skills back with them.”

Dones said she has not personally been impacted by violence.

“But I do have a heart for people who have as in trying to help out any way I can with them being impacted by violence,” she added. “Me personally, I do have a very bright personality. So, I think it will bring up some kids who are down. Being around here, you see a lot of different things. So, I kind of just want to help them and let them know that when they go home they still have those same skills, those same developments, waking up every morning, just trying to make the most out of each day no matter what the circumstance is.”

“I think it’s really important for the youth to have this opportunity to go to a camp because I believe it will keep them off the street, keep them occupied,” said Lauren Martin, who is also 16 and will also be a camp counselor.

“I think a lot of times, youth, especially my age, get into the things we do simply because there is nothing else to do,” Martin added. “We kind of get roped into it. I think having this camp is not only a way to keep them off the streets, but to help them build relationships.”

Election information from office of the Flint City Clerk