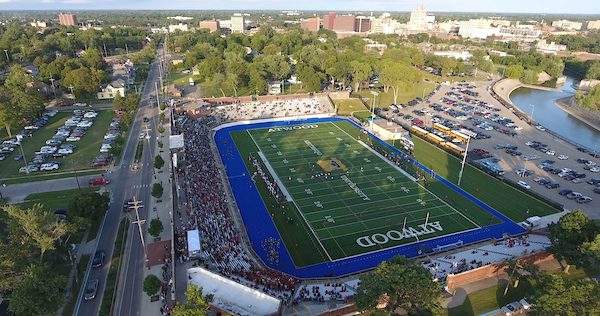 It was a beautiful day for high school football. The Flint & Vehicle City Gridiron Classic kicked off for its second annual football marathon at Kettering Atwood Stadium. The Beecher Buccaneers took on the Flint Jaguars for the opener. The Hamady Hawks battled the Byron Eagles and the Fenton Tigers faced the Brandon Blackhawks in the nightcap.

The Jaguars, led by the new head coach, Andre Weathers, had high hopes to get off to a good start. The young Jags were facing a tough challenge coming up against a seasoned Bucs team and their veteran head coach, Courtney Hawkins.

The Bucs were looking to avenge last season’s loss to the Jaguars, and that they did. Beecher got on the board first by scoring on a 20-yard reverse by junior wide receiver, defensive back, Earnest Sanders. Sanders didn’t stop there. He also scored on a 17-yard touchdown pass from his younger brother, QB Jacoby Sanders.

Beecher went on to beat the Jags 24-0. The Jags had an opportunity to avoid a shutout. Earnest Sanders, who played a great overall game, picked off a pass late in the fourth quarter to end the scoring threat.

In the second game, Hamady playing in their“fresh and so clean” uniforms got off to a good start. Wide receivers De Shawn Gibson and Tre Davis were unstoppable all afternoon. Byron had its hands full trying to corral the speedy wideouts. Gibson and Davis gave the Hawks’ offense a big boost by scoring multiple touchdowns.

QB Korvante Moore did a good job running the offense while wide receiver, Ali Brewster, ran a76-yard kickoff return for a touchdown in the first half. The Hawks ran up and down the field to outscore and beat the Eagles 50-28.

Hamady and Byron both made the playoffs last year, but to do so again this year, both teams will need to shore up their defenses.

“This was a huge victory.  This win should set the tone for the season. We’re happy we came out with a victory,” said Hamady Head Coach Gary Lee.

In the late game, Fenton played Brandon-Ortonville. Fenton came into the game as a seven-time, Metro-League champion. Fenton has beaten Brandon the last six meetings, but on this night, the Brandon Blackhawks were determined to stop that trend.