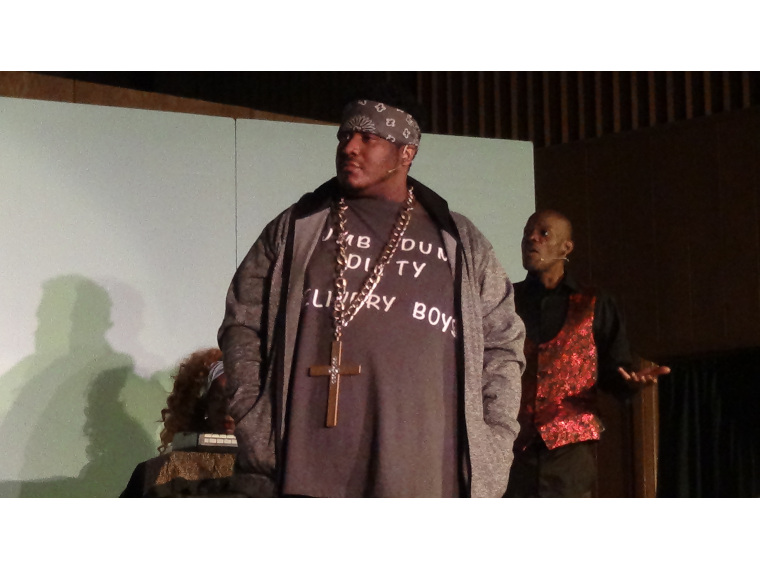 “Sanctified” offers a sometimes comical and definitely compelling glimpse into the heart of a church called Piney Grove Baptist Church. The musical stage play is being shown through May 21 on Thursday and Friday nights at 7 p.m., and Saturdays at 2 and 7 p.m. at the New McCree Theatre.

The show had been performed at the New McCree Theatre once before.

“It was exciting,” explained Cathye Johnson, director for the play.

“It was musical,” Johnson continued. “There was movement. There were all kinds of good qualities in the show. We wanted to be able to recreate that particular production, and the audience loved it.”

The church the play is centered around is in the Carolinas. The playwright conducted research to be able to put the play together.

Johnson expressed that she believed most if not all churches have the same tribulations Piney Grove has in the stage play. In it, Pastor Harold P. Jones, played by L. “Chris” Young, attempts to come up with ways to draw more attendees to the church. At the same time, some members of the church argue the church’s traditions must be maintained and some even start attempting to get rid of Jones as pastor.

Johnson said sometimes when comedy is added to a play, such as in this one which has some satirical pieces to it but is intended to be realistic, the comedy can “help soften the blow.”

Johnson has several favorite scenes in the play. She notes Dr. Pauletta D. Jones, played by Shannen Hawkins, makes a discovery about who she is without being as narcissistic in her approach as she was when she first appears on the stage.

“She herself gets taught a lesson in normalities of just being human without using her degrees to be over the top and better than anybody else,” Johnson added.

She expressed there were other scenes that stick out that were played well.

A printed form of the music for the play was used. George Warren, keyboard player and director, added embellishment to give the music an even better sound. Warren designed many of the overtures used for the production.

The overture led from one song to another. Before Pastor Harold P. Jones comes on stage, audience members hear birds tweeting.

“He set the tone for the ambiance of what was about to happen.”

The playwright wrote in the beginning of the script the play takes place “now.” The set design is also designed specifically for the present time, with an African American Jesus instead of the white Jesus normally seen.

“Working with the cast and watching them develop each character was very rewarding-to watch the characters evolve out of their understanding. Characters in plays have to develop out of something. Sometimes you bring part of you with it, but it’s all in the character development. Each character you see in the play you can identify with because you know people in churches who act like them-or people normally on street that act like them or walk like them. So, it’s more or less being able to identify the characters as you see them or as you know them as people you know realistically in life. It’s a realistic view of characters and what they may or may not do.”

The New McCree Theatre is located at 4601 Clio Rd., in Flint.