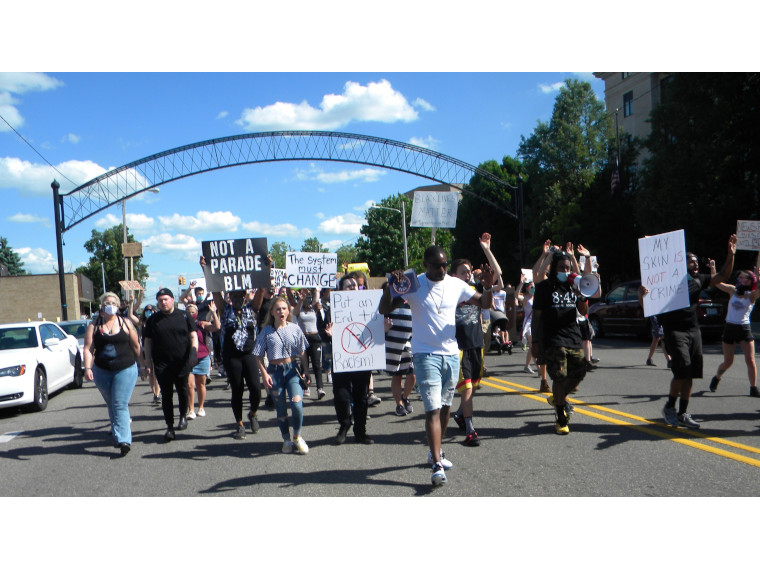 When protest organizers shouted out to the crowd “no justice,” the crowd hollered back “no peace.” Organizers and other participants yelled out “no racist,” and the group responded by saying loudly the word “police.” When “I can’t” was repeated, supporters of the Black Lives Matter cause spoke back the word “breathe.”

It was another peaceful protests in a city known for crime, yet demonstrators felt they effectively voiced they are concerned about eliminating racism in our society.

Even five-year-old Elenore Moore, of Flint, said she was at the protest June 6 because the police killed a Black man.

Moore’s mother, Kaitlin Prusha, who is White and has two Black daughters, brought her daughter out to protests a few times.

“She’s been scared,” Prusha said. “But it’s a beautiful visual for her to see this many people love and support her.”

Dana Sepa, who is originally from Flint, drove two hours from Belding, Michigan to protest.

“I feel very strongly for equal rights,” she said. “So, I drove all the way back to my home town to do this.”

Canisha Bell of Flint protested with the goal of helping people to understand the Black Lives Matter movement.

Black Lives Matter Foundation, Inc is a global organization in the U.S., UK and Canada, whose mission is to eradicate White supremacy and build local power to intervene in violence inflicted on Black communities by the state and vigilantes, according to the organization’s website. Black Lives Matter was founded in 2013 in response to the acquittal of Trayvon Martin’s murderer.

“Of course when I saw the video of George Floyd being murdered by police, there was a rollercoaster of emotions, but one that didn’t just start with George Floyd-because he wasn’t the first,” Bell said “I hope the protests bring awareness, and with that awareness that people start to do an inner reflection, and then hopefully that begins the process of dismantling systemic, structural and institutional racism.”

Protesters were told by Black Lives Matter member Johnnie Franklin III they were about to basically take over the entire street of Saginaw. The protests started in front of the Flint City Hall, walked to the Rally’s restaurant at the corner of 5th Avenue and Saginaw, to the 69 bridge and back in front of the Flint City Hall. At times, the protesters dropped down on one knee in unison for George Floyd, Breonna Taylor and others whose lives were lost.

DeWaun Robinson, the Black Lives Matter Flint lead, said a lot still had to be done.

“We want to make sure we change systems from the high level,” he said.

He warned against being energized when an activity such as the protest takes place for three to six months, saying oftentimes the energy dies down. He said what those in attendance did that day could make life better for small children that were also in the crowd.

“This is our modern day civil rights,” Robinson said.

“We’re in a war right now. We’re on the battlefield. We’re locking in together. At the end of the day, we can celebrate together, but right now, we’re on a mission.”

On the 69 bridge, a bundle of silver and gold balloons was released with the names of many who had lost their lives.

One protester, Ricardo Snow of Flint, said he was headed to Houston, Texas where George Floyd’s funeral will be held June 9.

Snow, who is in his 60s, said when he looked at the young people present he realized they were doing what he used to do. Snow said violence was not wanted in the city of Flint.

Another protester, Regina Porter, said when she saw Floyd call out for his mother moments before he died with a police officer’s knee on his neck was when she knew she needed to walk among the protesters.

“I’m tired of being scared for my son,” she said, in tears

Professional boxer, Claressa Shields, made an appearance on the bridge as well, shouting “Flint lives matter” as the group repeated the phrase. She said her great-grandmother marched with Martin Luther King Jr.

“We were rolling down the street on the highway and we saw a protest.” Shields said, who said she had a Black Lives Matter T-shirt.

Robinson called the demonstration “phenomenal” and said it would be one of many.

“We’re protesting every day, every hour, every minute, every second, every day,” he said.

Shain Maike said he came from Owosso to stand up against fascism and stand up for Black rights.

“I see people stepping out of their comfort zones and embracing us as one,” Maike said. “Seeing people come together in Owosso and being from there having seen the hate growing up with one of the only Black kids from town and watching everybody just trash him and then see what happened today, I see progress.”

He said he believed Flint could take the same steps forward.

Richard Bogan had protested seven of the last eight days. He is a part of a group of individuals building an organization to benefit, serve and get better in tune with Flint, as well as keep the momentum from the protests going. The organization is called Get to Know Me, and they have been building care packages for the homeless.

Citywide curfew extended to May 28