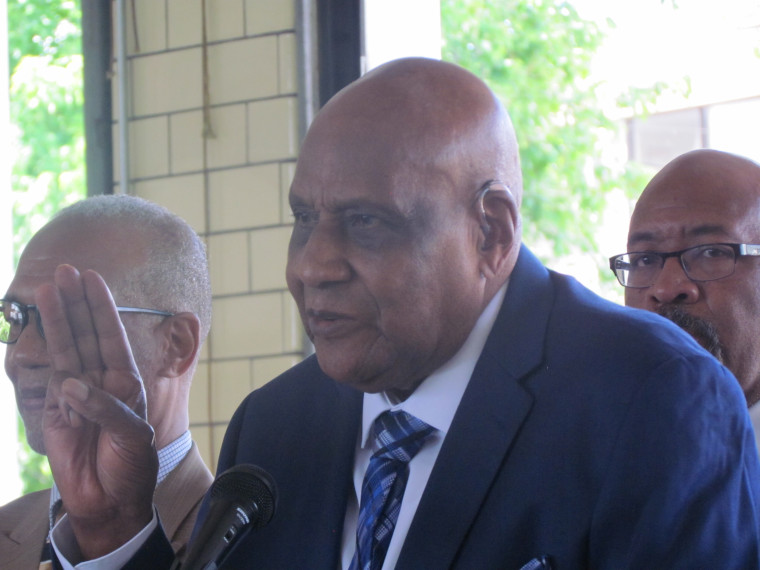 Featured photo: Joseph Davis Jr.  has been a scout and an Army soldier, in addition to being the City of Flint’s first Black firefighter.

When Joseph Davis Jr. became the city’s first Black firefighter in 1961, he never imagined he would have a fire station named in his honor. Yet, after having to persevere discrimination and prejudice after serving the Flint community as a firefighter for over 20 years-and decades after his retirement, something ‘amazing’ took place. A ceremony renaming Flint Fire Station #1 in honor of Davis recently took place.

Joseph Davis Jr. served in the United States Army from 1951 to 1954. In 1961, Davis began his career with the City of Flint’s Fire Department. For 14 years, he was Flint’s only Black firefighter and served a total of 24 years. In November 1985, he retired from the Flint Fire Department as a provisional sergeant. He is now 88 years old.

Davis told the Courier the joy, happiness and love he felt during the ceremony was “overwhelming.”

Davis said at the time he worked as a Flint firefighter, he didn’t realize how much would be depending on his success and being steadfast and not faltering.

“I knew if I didn’t it would be said: ‘see, they can’t handle it,’” he explained. “So, the thing of it is, I had to keep pushing and keep depending on God. I got through the situation, and I’m so proud of the people that came on behind me…It’s just so wonderful to see the young, underprivileged people that have been denied and people that are still denied-yet they’re breaking the unseen barrier by maintaining their dignity and pride and the performance of their job.”

Davis said there are good white people, but some people of the power structure want to point their fingers at the minority when problems minorities have tend to be systematic. He talked about how he doesn’t like to see minorities be treated as “cash crops,” but expressed hope for a brighter future.

Former Fire Union President Samuel D. Stewart IV came up with the idea to name the fire station after Davis, which he brought before Mayor Sheldon Neeley.

“I came across the notion because I talk to Joe regularly, just knowing the things he did for this city, how he brought the city together,” Stewart said. “He brought the races together. He inspired me…So, I came up with the idea of this particular building right here because it will serve everyone who’s coming on the fire department to know his history. Any school children’s trips-they will want to know and they’re going to know his name. It’s going to keep his legacy going.”

About three months passed from the time Stewart approached the mayor and the July 30 renaming ceremony. Neeley contacted Stewart about three weeks prior to the ceremony and told him he believed the idea could be brought before city council. The city council voted 7-0 to change the name of the fire station, which also helped make the occasion possible.

“It’s a beautiful day to be able to honor a man who started all this and probably the reason why I’m the fire chief today, being as though he was the first African American fire fighter for the City of Flint,” said Fire Chief Raymond Barton. “He had to go through a lot to have a career through here. By him showing it can be done it led other people to apply for the job and have careers. It’s just an honor because he’s still alive! To be able to see this happen, and him being here, and me being a part celebrating him and celebrating his accomplishments is a blessing.”

Barton said some Black firefighters joined the City of Flint after Davis-but quit before the training was over.

“Now kids can actually see the Joe Davis Jr. Fire Station and have something for them to inspire to be,” he said.

Charles H. Winfrey to run for Genesee County Board of Commissioners