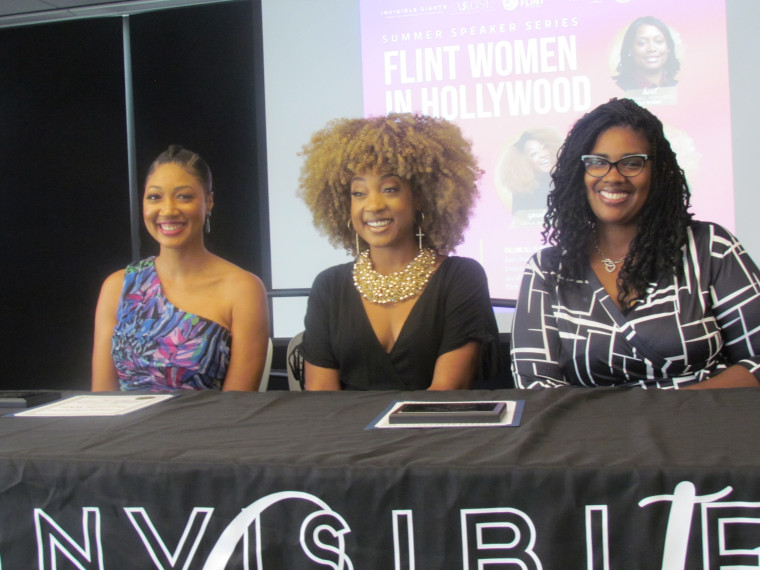 Members of the Flint and Genesee County community were recently invited to join Invisible Giants Legacy and Leadership Foundation, International Academy of Flint and the AROSE Foundation to hear stories from and possibly even network with Flint women impacting Hollywood. The event was part of the Summer Speaker Series at the Flint Public Library.

According to a bio provided by Invisible Giants Legacy and Leadership Foundation, Shondalia White is a multi-hypenate actress, stand-up comic and writer. White continues to grace the stages of some of the most sought-after comedy houses and has been featured alongside such great comedians as Jay Leno, D.L. Hughley and Cedric the Entertainer. She has completed voice-over roles in amimated, highly-rated television programs, including Nickelodeon’s Casagrandes, Pixar’s Onward, Pixar’s Turning Red and Nickelodeon’s Plaint Clair short. In the fall of 2021, she starred in the Starz drama Black Mafia Family, helmed by Executive Producer Curtis 50 Cent Jackson. White starred as the God-fearing attorney, Karen Jones, in the series.

White said at the library she has had to deal with a lot of challenges in Los Angeles and had to reconfigure.

“It’s like, I was thinking about going this way; now I’m going this way,” she said. “I worked at Chili’s (restaurant), and I worked in the fashion district. So, that had nothing to do with my career. But you do what you have to do in order to make ends meet”

At one point she also worked with a temp service. She said, however, everything she did worked together, serving a purpose to get her where she is today.

Kayla Wanakaee is a host, actress and advocate who has a heart for youth and women’s rights. She is the emcee/host for Pastor Sarah Jakes Roberts’ (daughter of Bishop T.D. Jakes) Women Evolve Tour. The movement has encouraged over 50,000 women across the United States.  Wanakee also hosts The Underdoing, a talk show on the BW Network.

Wanakee serves as an ambassador for Girls with Gifts and Dream Chasers, Inc.-both created to empower inner city youth. In addition, Wanakee is founder and CEO of Hope Together, Inc., which helps provide inclusion and resources to the special needs community.

Wanakee was asked by the Courier at the event whether her moral standards are ever challenged in her line of work, and if so, how this is handled.

“In Hollywood, it’s a lot of glitz and glamour, and everybody is chasing the fame,” she said. “So, even with being an actor, for me or even my son (who also acts), you’re being presented opportunities. You’re looking at the opportunity and what it can bring, but it may not represent you in a way that would be…representing who you really are in real life. Yeah, you’re playing a character-but oftentimes you can be consumed and put into something that isn’t you. It’s about being strong, steadfast, knowing where you want to see your career, knowing the type of characters you want to play and being able to be strong enough to know that your opportunity you’re never going to miss!”

Jonique S. Donald, a community school director for the International Academy of Flint who works with the Crim Foundation, was also a featured panelist. Donald proves one can choose to remain in Flint and be a star in his or her own right.

According to Donald, daily she is called, as others are, to stand for what she believes in.

“I’m being call to serve Flint well, serve Flint residents well, serve Flint kids well and make sure that I’m utilizing the resources in an appropriate way,” Donald explained. “Every day, it’s a charge that I have to walk into the office with integrity, and to make sure that I’m utilizing those resources in the way they were intended to be utilized. It’s a day-to-day commitment that I’ve made to serve well, and to walk into work with integrity.”

Each panelists received the Phenomenal Woman Award and was honored by the City of Flint, with 2nd Ward Councilwoman Ladel Lewis presenting awards. Jashell Mitchell, founder of the Invisible Giants Legacy & Leadership Foundation, hosted the event. Another event highlight which attendees will not likely forget, was a spoken word performance by Flint’s Mama Sol.

Flint primary election results are in!