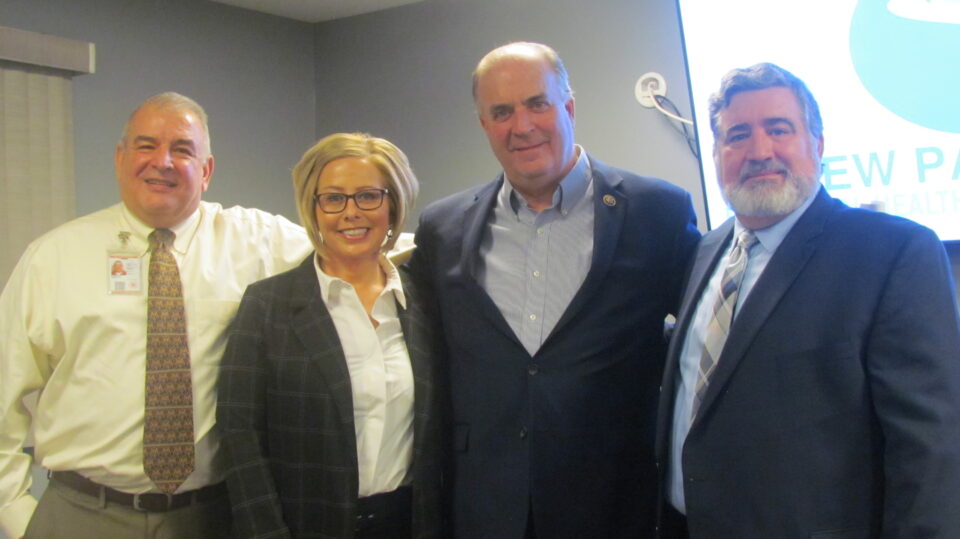 Genesee County has the third highest substance use and misuse rates in the state, according to Erin McClelland, clinical director of New Paths.

Congressman Dan Kildee recently spoke at a press conference at New Paths, Inc. about how he was able to help secure $1,000,000 for the behavioral health and recovery center through the Appropriations Committee.

The recently secured funds will be used to completely revamp the front entrance, which will help with disability barrier issues. A barrier-free waiting room will also be added.

In addition, the money will be used for energy efficiency. The money saved through these measures will be turned back to programming, helping to increase staffing so more individuals with diverse challenges can be helped.

Jim Hudgens, executive director of New Paths, said although opioids are a huge problem, an even bigger problem he sees is alcoholism. He said the pandemic made this problem worse.

According to Addiction Statistics, updated January 10, 2023, provided by the Addiction Group in association with American Addiction Centers, among adults struggling with substance abuse disorder, 73% struggled with alcohol use.

There are 75 windows in the New Paths main building, which will each cost nearly $1,000 to replace, according to Hudgens. He said in order to make all the improvements the building needs, it will cost about $2,000,000. However, he said the $1,000,000 will allow them to “do the important work,” without having to use program dollars.

Hudgens said New Paths has sought out funding before. However, he said, one of the biggest issues for nonprofits is there are a lot of dollars available for programming, but not for infrastructural repairs and replacements. New Paths is funded by Region 10, MDOC (Michigan Department of Corrections), and gets smaller grants from MDHHS and other avenues. However, the money cannot be used for improvements to the building.

Kildee also stated he hoped taking some of the costs for energy and reducing those would allow New Paths, Inc. to put more money into programming to help more people who are dealing with substance use issues.

Kildee was previously a member of the Community Mental Health Board and a county commissioner.

“When I was a county commissioner we supported New Paths for their community corrections programming,” he said.

Kildee stated he feels strongly everyone in the area has the right to get the care and treatment that they need for whatever their issues may be.

“We know that issues of mental health and substance abuse have been stigmatized for a long time, and it sometimes prevents people from getting the care that they need to put them on a positive path,” he added. “We want to destigmatize this. We want to make sure that everyone who’s dealing with this issue is unafraid to go to a place like New Paths to get the help they need.”

Kildee re-emphasized securing the funding was about improving the facility so the organization can become more efficient and serve more people. He believes the improvements will last for decades to come, and the reconfiguration to the entrance will be a permanent improvement.

“At times, our clients have major needs that we can refer to New Paths.”

Martinez said these needs can include addiction and mental health needs. He explained by working together, the two organizations can help get clients “out of the streets, out of the danger and into a safe zone.”

“I feel this is something that is very much needed in Genesee County. Working together creates a bigger team in Genesee County. When it’s someone’s life that’s at stake, it doesn’t matter where he get the help, as long as he gets help. After we see the overdose, it hurts, because it doesn’t have to be that way.”

New Path’s Inc. serves up to 120 clients at any given time through residential treatment facilities, as well as more than 300 people through outpatient services.

Introducing Davonte Walker: the newest edition to the Courier team