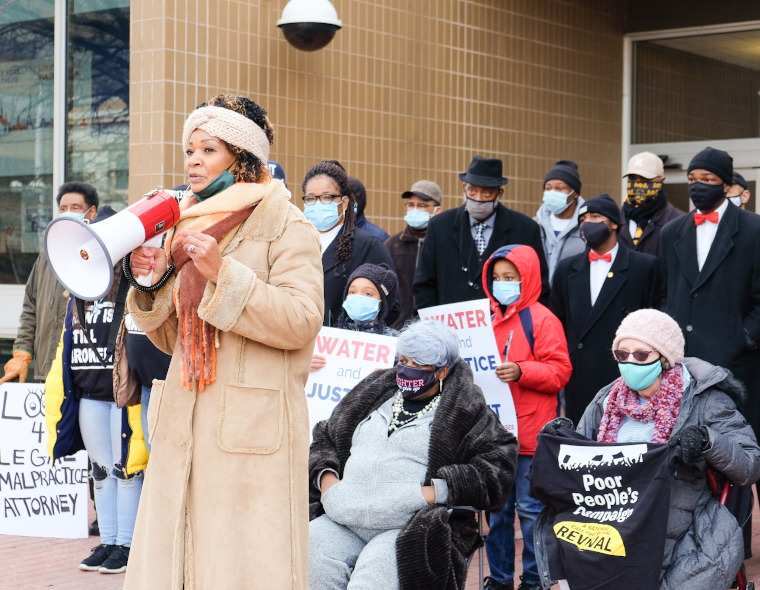 Featured photo: Lela McGee-Harvey, co-founder of Operation Unification, was the first certified housing authority in Flint and Genesee County. Harvey says her business was impacted during the time Flint was handled by the Snyder-appointed emergency managers. She recently spoke out in front of a federal building in Ann Arbor about the proposed water crisis settlement and on behalf of all businesses that were negatively affected. Photos by Lisa Land

A group from Flint traveled to the U.S. District Court in Ann Arbor and made their point known boldly along with volunteers from other cities and states that joined them, despite the fact the written statement they intended to deliver was not accepted at the time.

Pastor John McClane from Greater Destiny Ministries said he thinks he understands why a security guard “ignored” his attempt to hand him a statement written on behalf of a group of comprised of concerned community leaders, ministers and activists concerning the water crisis settlement. McClane believes the officer was on “red alert,” or high alert, because of recent events that have transpired.

“With all the pressure in the federal buildings right now and the uncertainty because of what happened last week-last Wednesday in Washington-security is heightened, and security is tightened,” McClane said. “So, that means it is a scenario where they’re all, especially from a security standpoint, much more on guard than what they were prior to January 6.”

Before going 60 miles to Ann Arbor to protest outside near Judge Judith E. Levy’s chambers on Thursday, Jan. 14, the group held a press conference in front of the Flint Water Plant Monday, Jan. 11. On both occasions, McClane read the statement which the group members signed stating clearly the proposed $641 million water crisis settlement from the state of Michigan is not enough money for the residents of Flint and the monies, furthermore, are not allocated fairly in the proposed settlement. In addition, they feel the guidelines to receive compensation need to be relaxed.

The group is determined to get the statement into the hands of Judge Levy, who is said to have the “last voice to get it right for the residents.”

McClane said he was grateful to be able to work with such a great group of people who are interested in the welfare of their community and want to see the people of Flint get the money they richly deserve based on the trauma they’ve been through.

Claudia Perkins-Milton showed the crowd a photo of what her face looked like due at one point due to the water, calling it “ridiculous.”

“I was spotted up like a giraffe,” she said.

Furthermore, Perkins-Milton said her sister died of two types of cancer, and both her niece and her friend had to have their legs amputated-all due to the water in Flint. Her friend was one of the individuals who was at McLaren Hospital due to Legionnaire’s disease.

“I had a black spot on my arm,” Perkins-Milton continued. “I got four injections in my leg this week from a rash that just won’t heal. My nephew had the highest lead count in the county!…I’ve got a lot of reasons to fight this mess!”

Perkins-Milton is with the Democracy Defense League. The group is one of several whose demands for the settlement include Medicare for all.

Councilman Eric Mays may get emotional when he talks about the water crisis settlement. He said residents in his wards have lost their lives due to Legionnaire’s disease.

“If you look at the Frontline PBS Special, all of the pneumonia deaths were not analyzed as to whether it was purely pneumonia or Legionnaire’s,” he said. “My mother died during that crisis…”

Mays said the group was there to start a process that would go for a few days. He said they understood, as plaintiffs, Levy might make a preliminary approval. After she make the preliminary approval, she will open up an objection period, a claims period and an opt out period. Levy said she would spend days, if needed, to hear from Flint residents. Mays said if his prayers were answered there would be over 5,000-10,000 people she would have to listen to echoing the same sentiment.

For adults, 3% of the proposed settlement would be set aside for property damage for property owners. Mays said after attorney fees are taken out about $400 million will be left of the settlement. He said if you do the arithmetic on 3% of $400 million, it’s about $12 to $14 million.

Mays estimated that the 5% of the settlement money may average out to around $1,600 per child for children ages 12 through 17 at first exposure affected by the water crisis, who would now be grown. Mays called this “outrageous” without Medicaid or Medicare.

“We might be better off going to jury trial,” Mays said in regards to if the changes he felt were needed were not made to the settlement.

Flint resident Joelena Freeman has three kids-now ages 22, 20 and 17, who were all affected by the water crisis. Freeman said her daughter is “allergic to everything under the sun.”

“(And) now she has a lower immune system, and she gets in this water, and she just breaks out every freakin’ shower!” Freeman said while trying to hold back tears.

“It didn’t start until seven years ago,” Freeman added.

She said her daughter just got out the hospital last week because her immune system had been lowered due to the Flint water.

“She caught COVID, and after thankfully surviving COVID, she came down with an infection that caused her not be able to breathe or to eat.”

Freeman said getting the needed testing and documentation was nearly impossible with the proposed settlement, and the dollar amount of the settlement was not enough.

“It’s not enough,” she repeated.

The statement to be delivered to Levy calls the settlement “egregiously unfair” to the vast majority of citizens in Flint, as it will direct the bulk of the $641 million settlement to a comparatively few recipients of bone lead testing; testing that has been largely unavailable to the vast majority of citizens of Flint. It points out children can only qualify for two of the categories which pay higher compensation if they undergo a full individual evaluation from a team consisting of a board-certified pediatrician and a neuropsychologist. It calls the property damages maximum of $1,000 for Flint homeowners “woefully inadequate.” The group calls for Levy to implement six correction measures. The first such measure is to make bone lead testing available to children and adults that need it at an affordable cost immediately.

Flint resident Claire McClinton said the group has been encouraging individuals to write their own letters to the judge in objection to the water crisis settlement. She said they want to tell the judge their stories, to share their hearts, their souls, their pain and their suffering.

“We’re not going to just sit down and be quiet,” she said. “If we would have been quiet we would have still been drinking poison.”

Drive-thru COVID19 Vaccinations to be offered at Hamilton-North Pointe