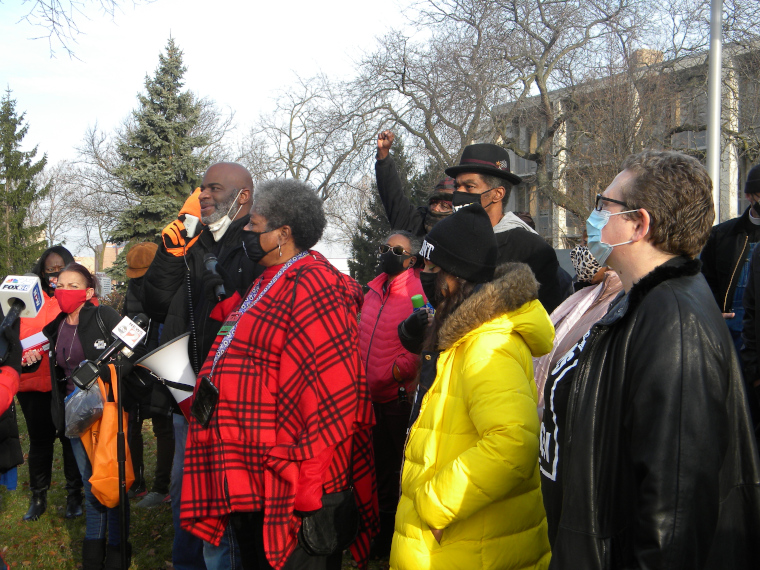 Featured photo: Arthur Woodson thanked former Mayor Karen Weaver, who he formerly led recall efforts against, Councilman Eric Mays and many other concerned community leaders and members who came together to protest for a common cause.

Conversations have been getting heated as the Flint City Council has been preparing to vote today on Monday Dec. 14 on whether to accept a $20 million portion of the $641 million Flint water crisis settlement with the money to be coming from the city’s insurance company.

Since some council members and members of the community had questions about clauses in the settlement, a special meeting to which attorneys were invited was held the previous Thursday.

More than one Flint resident expressed distrust in the lawyers at the meeting.

Mayor Sheldon Neeley said the people impacted would have to cover the cost of the $20 million through assessment on tax bills if they do not use the insurance money, and he urged the council to vote yes to accept using the city insurance to cover the costs.

“I’m really upset with Mayor Neeley and most of the city council, who is trying to blackmail us with the $20 million,” one resident said during the public comments segment of the meeting.

“If we don’t settle for the $20 million then we’re going to have to pay for our own poisoning,” she added. “That is not right.”

Another resident advised the council to vote to accept the $20 million portion of the settlement so residents weren’t taxed out of their property.

Also during public comment, residents expressed that liens for unpaid water bills, said to be unjust, were not addressed in the settlement. In addition, it was said the lawsuit did not take into consideration homeowners and nobody wants to buy a house in Flint.

Councilman Eric Mays asked how many years since 2014 the city used its insurance carrier.

His question was not able to be answered. A representative from the insurance company was not available. He was told the question should be directed at the finance department. He said he would request a special order before the vote Monday and requested the information.

“If they had a policy all those years and they’re zeroing in on these two years in the settlement; max out at two years is $20 million,” Mays said. “If you didn’t max out over five years and left some more for some more settlement-and didn’t max out at five years, I might want to settle for six million at five years. That’s $30 million. But the point is my job is to look out for the amount of checks that go in these residents’ pockets.”

Councilman Maurice Davis asked the attorneys directly whether the council should vote yes or no on accepting the $20 million contribution and was told by Rick Berg of Butzel Long law firm accepting it would be in the best interest of the city.

Although Mays and others said this was not necessarily the case, Berg told Davis they would go forward with the $641.2 million whether the council voted to add the $20 million or not.

A protest was held in front of Flint City Hall to let the lawyers, the state, the city and the federal government know many Flint residents are not satisfied with this lawsuit.

“It seems like people are paying attention to this settlement a lot more, and that’s what we want people to know-that is not a fair amount,” said Former Mayor Karen Williams Weaver, who spoke to the crowd during the protest.

Local activist and water warrior who on the executive board of the Democracy Defense League Claudia Perkins-Milton spoke after Weaver and said she doesn’t like the injustice, the criminality, the disdain or the way Flint residents are apparently being perceived as being stupid.

“Flint has not been made whole, said Laura MacIntyre, a member of the Democracy Defense League.

DeWaun Robinson, Black Lives Matter Flint chapter leader, said the settlement showed the discrepancy of the way people get treated in this country.

“The settlement is very disrespectful, it’s distasteful and it’s very poor judgment,” said Cynthia Haynes, an activist and a parent whose child has been affected by the lead in the water.

Flint resident Christina Sayyae, who almost died, said the lawsuit was not enough to cover even three of her doctor bills.

“We’re not asking anymore, we’re demanding that they go back to the negotiation table and come back with $2 billion, $3 billion-not $600 million,” said Arthur Woodson.

According to Mays’ calculations the payment per adult will be approximately $536.

“We’ve got some tweaking to do,” he said. “We’re proud of the proposed settlement. We see the categories. We want to move some percentages around and we want another amount of money put in there.”

Flint resident Joelena Freeman, who was with the protesters and is also with the Democracy Defense League, said her daughter still breaks out every shower and has hives because of the contaminants in the water. Her younger son has had issues with behavior. She said it was very difficult to get documentation from doctors and adults cannot get paid from the settlement without the documentation.

“I’m fighting for my kids,” she said. “All my kids have issues that have to do with the water. I’m not the best speaker, but I’m hurting just like everybody else.”

There are three types of water litigation against the city of Flint. There are water damages, water refund and illegally raised water rates. If U.S. District Judge Judith Levy rules on a motion for preliminary approval she will set a date in which residents can inform the court whether they desire to express objections to the settlement and will then set a date for hearing those objections.

The public can listen to tonight’s meeting at 5:30 p.m. online by live stream at https://www.youtube.com/watch?v=ncuOcuMHpEE or through Start Meeting Solution by dialing (617)944-8177.