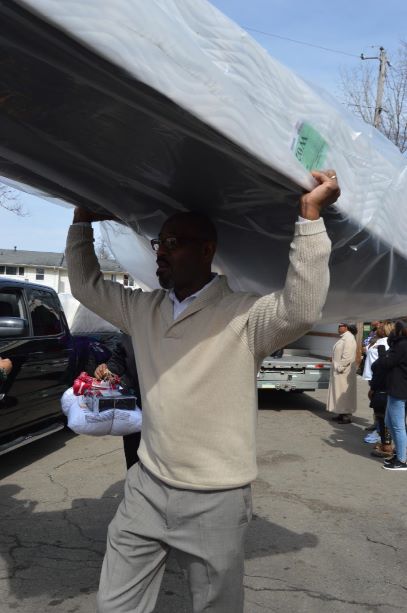 Ebenezer Ministries recently delivered a large number of items intended to make life better and more comfortable for about 50 residents at the Evergreen Regency townhome complex. The church gave away 50 sets of linen, which included the mattress covers, the linen, the bed spread and pillow. They also gave away 50 mattresses and box springs. In addition, they gave away books for the children to read, and the members of Ebenezer Ministries signed positive messages on inside each book. The messages said “reach beyond the stars,” “you can be anything you want to be” and other uplifting messages.

Twenty to 22 families were serviced, with some families receiving up to five beds, depending on the number of children in the home.

This number was selected based on what was feasible for the church at the time, according to Angie Thornton-George, Ebenezer Ministries marketing and public relations director.

“We were just trying to help some children in the Flint Community Schools who don’t necessarily have beds to sleep on at night. We wanted to allow them to get a good night’s rest-with no worries. We also provided the mattress covers so they wouldn’t have to worry about the potential of bedbugs,” Thornton-George said.

According to Thornton-George, Ebenezer Ministries did not receive any information leading them to believe there was a problem with bedbugs at the Evergreen Regency townhome complex.

“But we know that bedbugs are prominent everywhere now. We just wanted to make sure that they were covered so it would not be a possibility,” Thornton-George said.

Thornton-George said the church members wanted the children to be able to have proper sleep so that when they went to school they could focus on getting a good education.

The church caravanned from Ebenezer on March 8. They had two large rented vehicles full of the mattresses, as well as the linen. The Genesee County Sheriff’s Department and city of Flint police officers escorted  the church members to the complex.

“They were on the premises with us the entire time-from about 1:30 to after 3 p.m. They escorted us because, first of all, Ebenezer is located on Center Road, which is a very busy street, and we really needed to get out of our parking lot. This was there way of assisting us to get out of our parking lot. It was also to ensure safety within Evergreen Regency. As we know, for some people, it’s considered a very underprivileged area. So, it was for the safety of everyone around. It was their way of giving back as well.”

The word “Ebenezer” in the Bible stands for the stone of help. This comes from I Samuel 7:12.

“We go to church within a building, but we have to realize that God is not just in the building. So, we serve God first. Then, our families come second, and the community comes third. So, for us, by serving Evergreen Regency, we are purposely working out our mission statement by serving them. We want them to know that God is not just within the four walls of the church, but within the community as well.”

Antoine Minor, a congregant at Ebenezer who works as a mentor within the Flint Community Schools district, was aware of students and families who were in need. Because of this, Ebenezer had a list of those to receive the items beforehand. Because supplies were limited, Ebenezer also made a list of those who would be interested in receiving items if the church is able to do the same thing again.

The residents who received the items were very grateful in Thornton-George’s perception. One woman came out of her home and was not on the list to receive items, but she asked how she could get help. She had children with her. There was someone who was on the list who was not home to receive the items. So, these items were given to the young woman, who said she had just thrown out her mattress the day before and said she was in great need.

Thornton-George said she was overwhelmed and wanted to cry when she saw the residents of Evergreen Regency get their items.

“A lot of us take a bed for granted. But when you see people who don’t have a bed to sleep in, it makes you feel good to bless someone else to have a restful sleep so that’s something they don’t have to stress about.”

Ebenezer also has a street ministry through which members have set up tents to have worship service or pray for people at Evergreen Regency, as well as other places. They also have pop-up church in the summer in which they “pop up” on any given corner and have 30-minute services. Some of the previous locations this has been held include the corners of North Saginaw and Jamison streets, at the corner of North Saginaw and Marengo and the intersection of Martin Luther King and Louisa. At the pop up church services, cases of water are given away to those in need in place of an offering being taken.

On April 9, Ebenezer will have a census party to encourage the community to take fill out the census.

“God blesses us every day to be a blessing to others. So, we could never do enough.”

Ebenezer Ministries is located at 2130 S. Center Rd., in Burton, and is the church home of Jowanne Carrigan; advertising representative for the Flint Courier News.

GST Michigan Works! is working to reduce unemployment with their summer training and employment program (STEP)

Digital discrimination and the jury pool? Court policy can cause unintended harm