Featured photo: A Genesee County resident who spoke in favor of the existing K-6 mask mandate at a recent Genesee County Board of Commissioners meeting describes what happened in Tennesee to argue his case.

At a recent Genesee County Board of Commissioners meeting, one county resident said the question was whether Hackert was doing the right thing or not.

“We have the opportunity because in Tennessee they’ve already done this for us,” the resident continued. “They went with an ‘anti mask law.’ Since August 6, when the schools opened, there’s a 324% increase in COVID in children. Twenty percent of the kids in school have COVID. My niece lost 10 days in school, and it’s not even out of August yet. There is no question here. We have to do something to stop this.”

Other county residents spoke out against the mask mandate, with some of them saying it violates their rights and their children’s rights, as Americans, under the U.S. Constitution.

One speaker said he has been an ER nurse for 24 years.

“I know what COVID is,” he said. “I’ve seen COVID. I know what it does. I know how it affects people. I also know how a mask can affect a child.”

The speaker said he didn’t think grandparents want to see children wearing masks affected negatively because they are “facially excluded from seeing verbal cues, things that they need to learn from each other…”

The speaker said he believed this was a developmental issue that needs to be addressed.

A Burton resident, who said she is a registered nurse and a psychiatric clinical nurse specialist, said she also listens to people who have public health and infectious control expertise, such as Dr. Fauci.

“If people hate wearing a mask so much, they should get vaccinated,” the resident said.

She said she wish they would mandate vaccines for everyone in the United States, similarly to what was done in France.

Davis pointed out many very young children who wear masks are likely wearing breathable, cotton masks and that when she sees Hackert, Hackert is wearing a more heavy duty mask. Davis asked if the cotton masks were doing anything.

She also said they just put out a link that would have articles showing the masks’ effectiveness in various settings.

“We know from all of the other evidence that masks will reduce it and depending on how effective those masks are at stopping these respiratory droplets from going out is how much you will be able to protect people in a room,” Hackert added.

Even to reduce transmission by 35% for the number of hours people are in the classroom together is going to reduce the number of cases seen in the community and in children, according to Hackert.

Hackert said many, many children have worn masks for months, if not years. Some of these children include those diagnosed with cancer who can’t get a cold or they will be back in the hospital.

Shumaker asked whether after the vaccine is available for young children and their families who choose to take it the mask mandate be lifted for K-6 students.

Hackert said throughout the pandemic, we have seen that things change very rapidly. For example, she pointed out, there was one day last spring that two different times within the day the recommendations from the CDC changed based on the studies that were coming in.

According to Hackert, when the mask mandate is lifted will be based on what the transmission rate in the county is.

The order is to remain in effect until eight weeks after a COVID-19 vaccine is approved and available to children ages 5-11 and when community transmission here is categorized as “low” or “moderate.”

The majority of the county commissioners were not present at the meeting. Commissioners Charles Winfrey, Shaun Shumaker and Meredith Davis were the only ones in attendance. 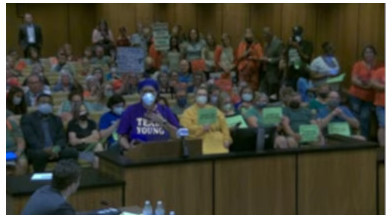