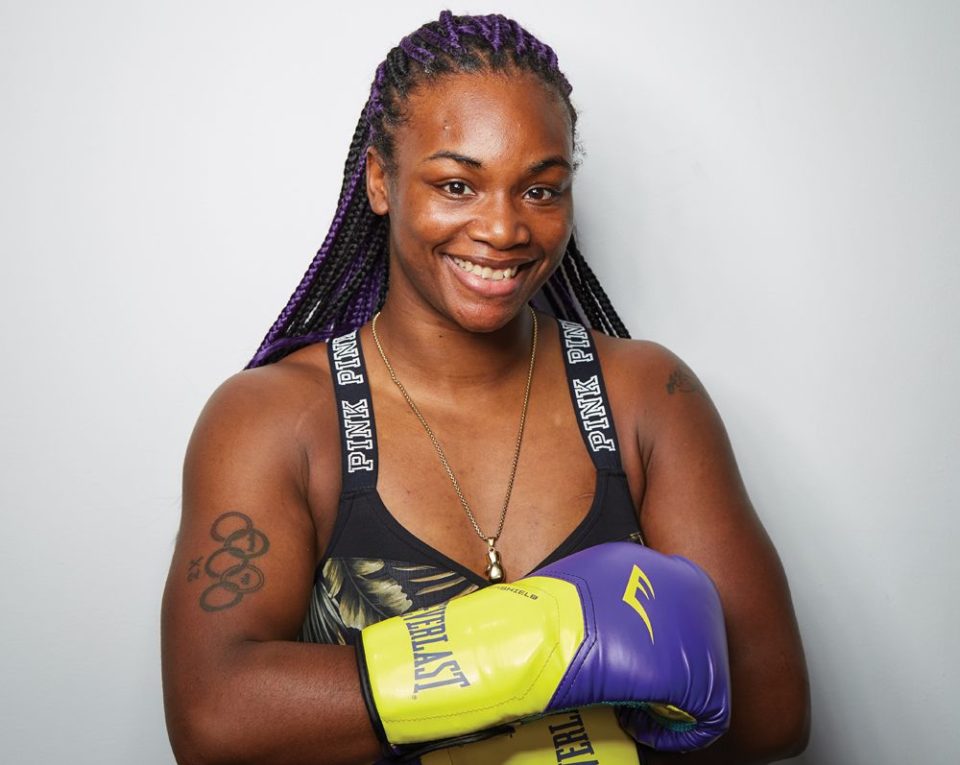 Claressa Shields is attempting to become the first fighter, male or female, to win three world titles in three different divisions. If successful, this feat will be the fastest ascension and accomplishment in boxing history.

Shields will fight professionally for the first time in Flint on Saturday, Oct. 5 at the Dort Federal Credit Union Event Center. The fight was originally scheduled for August 17   but was postponed due to Shields suffering a  knee injury. The undisputed middleweight world champion faces former world champion, Ivana Habazin, for the vacant women’s WBO junior middleweight and WBC super-welterweight titles.

“I’m more excited than ever. I’m 100 percent recovered, and I can’t wait to get back into the ring in front of my hometown fans in Flint, as the undisputed champion of the world,” Shields said in a released statement. “Having the opportunity to become world champion in a third weight division, faster than any man or woman in boxing history, will make October 5 a night I will cherish forever.”

In a rebuttal statement, her opponent Habazin said, “I am not just coming to fight for a world title. I am fighting for my life and my career. I believe I am the best and now I got a chance to prove that, and there is no better opponent for that than Claressa Shields.”

Twenty-nine-year old Habazin is the No.1 fighter at 154 lbs. The Zagreb, Croatia native is 20-3 in her professional career and will be making her U.S. debut. “It’s a dream come true, and this is a chance for me to prove that I’m one of boxing elite fighters,” said Habazin in a prepared statement.

The undercard will feature some exciting bouts. In an “All Detroit” 10 round showdown. West Detroit WBO and No. 13 ranked super-flyweight JaRico “Great Lakes King” O’Quinn (12-0-1, 8KO’s) will face East Detroit’s James “O.G.” Smith (13-2, 7KO’s). Detroit hasn’t produced a world champion caliber boxer in recent years, but O’Quinn is considered the hottest boxer coming out of the Motor City. Smith has been honing his boxing skills working on becoming a better boxer instead of looking for the knockout.

In another undercard fight, Hannah Rankin (7-3) from Glasgow, Scotland takes on California- based veteran Erin “Steel” Toughill (7-5-1) in a six-round showcase. Rankin put her country on the map by becoming the first Scottish woman to win a boxing world title. The 28-year-old is also a professional musician. The accomplished bassoonist completed her Master’s degree at the Royal Academy of Music in London.

Forty-two-year-old Toughill is a seasoned fighter who is a retired mixed martial artist and a former cage fighter. Toughill also participated in American Gladiators the competition TV show that matched amateur athletes against each other.

Also scheduled for action will be Saginaw, Michigan cruiser, Robert Simms (9-3, 3KO’s), going in a six-round battle against Columbus, OH Michael Glasscox (6-3-2, 5KO’s). Undefeated Kazakhstani heavyweight, Izim Izbaki (2-0, 1KO), will face Mt. Morris, MI Troy Albring for a four-bout. One of the last of the young fighters trained by the late, great Emanuel Steward, undefeated welterweight Jacob Bonas (3-0-1, 2KO’S), will be taking on Indiana’s Norfleet Stitts, in a four-rounder to open the card.

The Habazin vs. Shields fight will be televised live on Showtime. The Showtime Boxing Special Edition will also telecast the undefeated heavyweight prospect, Jermaine Franklin of Saginaw, Michigan (19-0. 13 KO’s), against the Czech Republic’s once-beaten, Pavel Sour (11-1, 6 KO’s).  For ticket information,  call Dort Federal Event Center at 810-744-0580 or go to Ticketmaster.com. This boxing extravaganza is a Salita Production.

Public invited to learn about, give input on Consumers Energy Clean Energy Plan