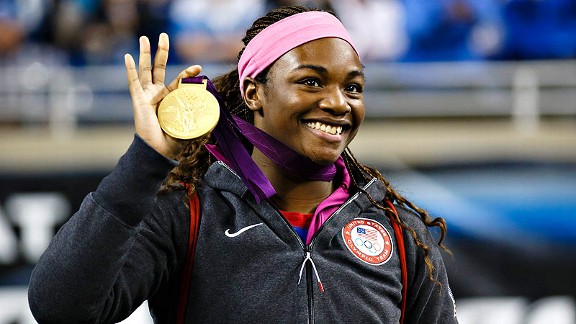 Claressa Sheilds has accomplished another first for women’s boxing. The two-time Olympic gold medalist and Christina Hammer was featured in ‘All Access’ episodes on Showtime Sports social media platforms.  The episodes premiered March 29 and April 5 on Showtime’s SHO Sports, YouTube, and Facebook pages.

Shields, our hometown champion, and Hammer will face off in a fight for the undisputed, middleweight championship on Saturday, April 13. on Showtime from Atlantic City, New Jersey. The episodes will highlight Shields preparing at the U.S. Olympic Training Center in Colorado Springs, Colorado and Hammer training in Seefeld, Austria.

The undefeated Shields, (8-0, 2 KO’s) and Hammer (24-0, 11 KO’s), were supposed to fight on November 17, 2018, but the bout was postponed by Hammer due to illness. This fight will be the biggest fight in women’s boxing history. Shields is the WBA, WBC, and IBF champion, while Hammer is the WBO champion and also still claims to be the WBC champion.

Hammer has quietly become a top-notch boxer in her sport while competing for the majority of her career in Germany. Shields is more high profile, both because she became the first American boxer, male or female, to win two gold medals as well as having a bold, in your face, personality.

Hammer, on the other hand, is more laid back. She’s a lingerie model and an online casino operator in her spare time. Both fighters are confident they will be victorious. But there is one thing they both agree on — this fight will be a game changer.

For years Hammer has hoped for the day when women boxers would be given their due and treated the same as women’s mixed martial arts fighters in terms of pay and promotion (since at least 2013, when Ronda Rousey joined the UFC).

“It’s been frustrating, to see so many talented women compete without getting the kind of recognition female athletes in other sports routinely receive,” said Hammer.

It’s clear with the All Access episodes that Showtime is having this marketing blitz to put Shields out front and center. Shields has been very visible on social media and making herself available to media outlets. In just eight pro fights, she’s already a two-division champion and has a strong belief in herself.

Shields is looking for a knockout.

“I want to make her quit,” she said during the press conference to preview the fight. “I don’t want her to just know I’m a good fighter; I want her to know I’m great. I wish we could go 12 rounds, but I’ll be prepared for all 10 rounds. Make sure you all tune in,” said Shields.

Hammer, at 28-years-old, is nearly five years older than Shields and understands what’s at stake.

“Shields is beatable, anything can happen in boxing. I’m prepared to go the distance,” Hammer said.