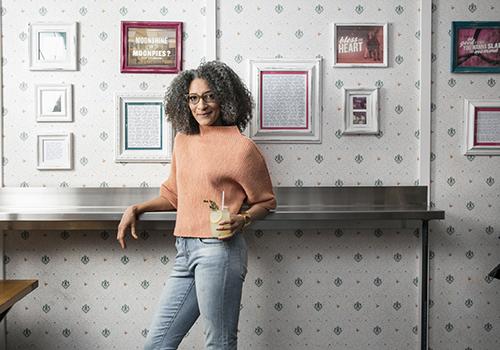 Celebrity Chef Carla Hall, of The Chew, will be on hand to help Mott Community College (MCC) celebrate the grand opening of its new state-of-the-art Culinary Arts Institute at noon on June 7, followed by a community open house and tours from 1 to 3 p.m.

Visitors will have an opportunity to tour the 36,000-square foot renovated building and meet Chef Carla Hall, a former co-host of ABC’s lifestyle series “The Chew” and author of three cook books. She currently appears on ABC’s Strahan and Sara, and serves as the Culinary Ambassador for Sweet Home Cafe at the Smithsonian National Museum for African American History and Culture in Washington, D.C.

“We are delighted to have Ms. Hall with us as we open this amazing facility,” said MCC President, Dr. Beverly Walker-Griffea. “The opening of the MCC Culinary Arts Institute represents our commitment to improving the economic and social fabric of the broader Flint, Genesee County, and mid-Michigan region,” she said. “Not only will it enable the College to double enrollment in our Culinary Arts program, meeting industry demand for new talent, it will also bring new opportunities to the area.”

The new Culinary Arts Institute allows MCC to expand the Culinary Arts curriculum, expand the program’s student-operated restaurant service to include the baked goods café, and support community events in the downtown area. The larger facility will also enable MCC to increase the Culinary Arts program capacity to approximately 400 students, bringing new students to the area, and creating secondary economic impact.  Nationally, the restaurant industry is projected to grow by 1.7 million jobs by 2025.
Renovations to the Culinary Arts Institute created two culinary arts teaching kitchens, two bakery and pastry arts teaching kitchens, a meat fabrication teaching laboratory, a garde mangér classroom, a dining space connected to a baked goods café and a large, dividable meeting space to teach all aspects of the food service industry to MCC students.
The 36,000 square-foot former Woolworth Building was originally built at the turn of the 20th Century. While not located in a designated historic district, during renovation existing historic elements were preserved and new elements, such as signage and outdoor lighting, continue the historic theme.
The Evolution of Culinary Arts at MCC:
The Culinary Arts program at MCC began in the 1960s with an Associate’s degree in Food Service Management, followed by a one-year certificate program in Culinary Arts in the 1970s. Both programs operated out of a small classroom/lab space on the first floor of what is now the Curtice-Mott Building. As the program grew, Culinary Arts evolved into an Associate’s degree, and the program opened its first dining space, called The Greenery, in the early 1990s, located in a classroom next to the program lab space. Culinary Arts expanded rapidly in the 1990s  with the addition of Baking and Pastry Arts to the curriculum, relocation of Culinary classes to the Prahl College Center and the opening of Applewood Café, a fine-dining restaurant for the Culinary Arts and Food Service Management programs. The program was housed in the Prahl College Center until relocating to the new Culinary Arts Institute.
MCC offers Associate of Applied Science degrees in Baking and Pastry Arts, Culinary Arts, and Food Services Management. Students enrolled in the MCC Culinary Arts program receive intensive training in all phases of the restaurant business, giving them the expertise necessary to become a professional in any area of the food service industry.
previous post

Spring is here and wildlife are active: Be aware of rabies in Michigan