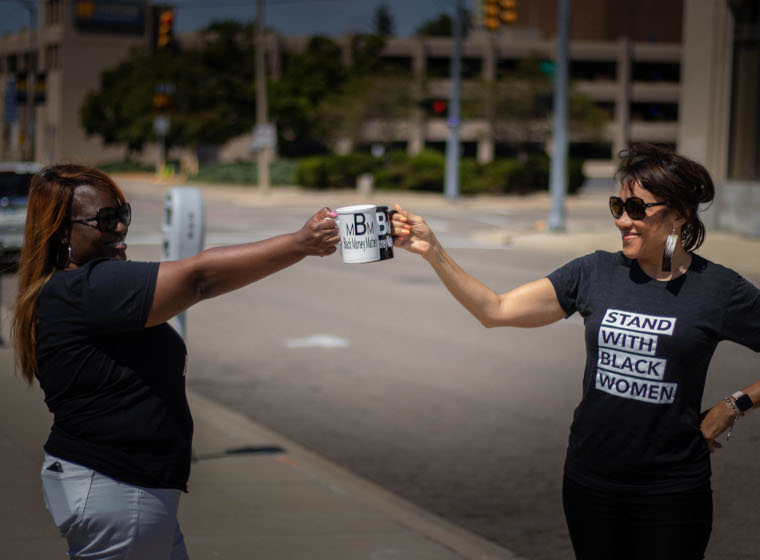 Former Flint Mayor Dr. Karen Williams Weaver, along with Flint’s former Chief Recovery Officer Jameca Patrick, have begun co-hosting a talk show called “Black Money Matters.” The show focuses on creating and keeping wealth in the black community. The show also places an emphasis on economic development and opportunities, Black-owned businesses nationwide, the correlation of health and money and a host of other relevant topics.

“Black Money Matters” was created after conversations between Weaver and Patrick regarding the COVID-19 pandemic.

“We were discussing how COVID-19 impacted African Americans at a disproportionate rate and how money plays a role in that,” Weaver said. “So we named our show ‘Black Money Matters,’ because money impacts everything that we do.”

“It’s frustrating because there are so many roadblocks to attaining wealth in the Black community,” Patrick said. “So we decided to help with that.”

Patrick said many times, Blacks have built wealth within their own communities only to have it taken from them-sometimes violently. She said sometimes programs are also advertised as helpful with names like “urban revitalization.”

“You couple that with systemic racism in so many other arenas and it’s no wonder that the net worth of white families is nearly 10 times that of Black families,” Patrick said.

The talk show is an arm of the Karen Weaver Foundation and airs at 3 p.m. on Wednesdays and 1 a.m. Saturdays on local Comcast channel 17. It can also be found on YouTube and Facebook.

Some highlights of Weaver’s priorities and accomplishments during her tenure include:

*Securing funding to replace lead and galvanized pipes, completing replacements using the safest measures possible, ahead of schedule and under budget.

*Securing $2.9M in grant funding to create an Economic Development Department, which had  not been in  place in the city of Flint for 14 years.

*Securing $30M in funding from the United States Housing and Urban Development for new, affordable housing in the city of Flint.

*Hired first ever chief public health advisor to create a public health team and implement a Health in All policies approach to decision making.

*The city of Flint now has a $24.5M surplus, which remains available for Flint residents, as a result of previous decision making and spending.

*Led city of Flint through regaining local control after the city had been taken over by state implemented   emergency managers.

“While I no longer serve as the mayor of the city of Flint, I yet have an unquenchable desire to stand with communities and assist them to address their water and infrastructure needs,” Weaver said. “My new servant leadership role in philanthropy will allow me to continue to work fervently and tirelessly to push for immediate fixes to our aging infrastructures, protection of our environment and for equitable access to safe and affordable water for all.”

Weaver and Patrick also talked about their rapport.

“I knew from the moment that I interviewed Jameca for her job as chief recovery officer for the city of Flint we had good chemistry,” Weaver said. “I was set to not hire her because I had heard that she had taken another job, but then I asked her one question in the interview and she started talking. I immediately noticed her passion for the community and how our dedication to improving our hometown aligned”.

In an interview with the Flint Courier News, Weaver attributed her ability to accomplish her priorities while in office, in part, to surrounding herself with smart people.

Weaver and Patrick are excited about the upcoming guests including local business owners and national figures and encourage everyone to watch the show.

“Black people have been cut out of economic opportunities for far too long,” Weaver said. “We created this show to provide information and access to experts that can give us step-by-step instruction to building and sustaining wealth.”

Or watch a recent episode of the show on YouTube at https://www.youtube.com/watch?v=LNXEmZxw4RI

Visit http://kwwfoundation.org/ to learn more about the Karen Weaver Foundation,

Courageous Conversations on Race, Racism, and Radical Change to kick off with “The Vent” sessions